House Of Whipcord, The Comeback and Die Screaming Marianne 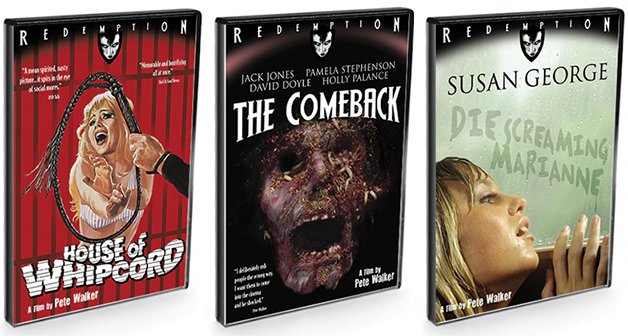 Through the 1970s, producer/director Pete Walker churned out a string of generally reviled sex-and-violence shockers, but the three gathered here offer solid junk entertainment. One of them, House Of Whipcord, is as fine a piece of grim trash as you’re likely to find.

A young model (Penny Irving) is hijacked into a private prison run by a blind ex-judge (Patrick Barr) and his ex-warden lover (Barbara Markham), who believe they’re imposing moral law. Whipping, hanging and escape attempts add up to an oppressive atmosphere of institutional rigidity intended to mask sadism, lesbianism, incest and homicidal mania.

Little of the action is graphic, but the veteran cast suggest worlds of depravity with the hint of a smile. Markham gets most of the big scenes, but Sheila Keith chills to the bone as head guard.

Keith shows up again as a sinister housekeeper to steal the show in The Comeback, a stylish woman-in-peril flick in which a guy (pop singer Jack Jones playing a pop singer) faces the unseen dangers of things going bump in the night and a masked maniac is hacking up his closest associates.

Die Screaming Marianne starts brilliantly with a girl (Susan George) on the run from her murderous, incestuous family accidentally marrying the wrong guy, but founders in an exposition quagmire until the not particularly shocking climax.

Walker, cameraman Peter Jessop and a couple of academics deliver a trio of excellent commentaries and interviews that cover the moral panic then gripping England, the censors, the state of the English film industry, Walker’s financing and working methods, cast and crew.