The city councillor rewatches the whole series nearly every year. 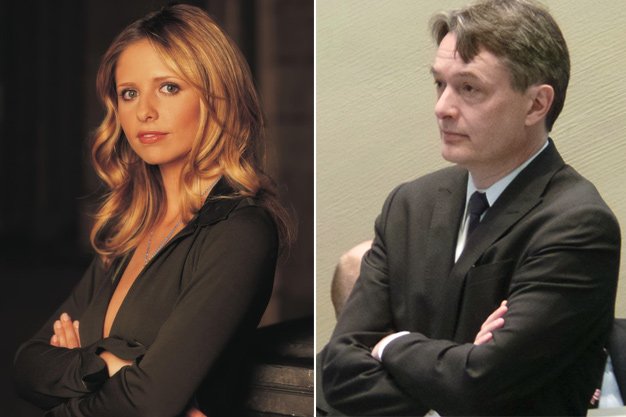 Gord Perks is a Toronto city councillor, first recruited in 2006 by then-mayor David Miller to represent Ward 14 (Parkdale-High Park). With a dazzling knowledge of policy and procedure, and uncanny ability to articulate his values, he’s the de facto organizer of council’s left-wing opposition to the conservative mayors of the past five and a half years.

Buffy The Vampire Slayer was a television series created by Joss Whedon that ran from 1997-2003 on the WB and UPN. With superhuman strength and reflexes, the title heroine lead a group of friends fighting off repeated demonic threats to the world.

Gord Perks watches Buffy The Vampire Slayer — all seven seasons and 144 episodes — nearly every single year. He’s seen it seven times in its entirety since first getting into the show in 2006.

NOW’s cover story this week is about how binge-watching television has become a socially acceptable phenomenon, with much of the staff (myself included) contributing write-ups of the shows we find most “bingeworthy.” For many of us, that means those programs that offer the most compelling escapes or mesmerizing plots.

I wanted to talk to Perks, then, about his well-known affection for Buffy, because he consumes the show not just as a diversion but as a reliable source of intellectual nourishment that informs his approach to politics. During the years of Mayor Rob Ford especially, he would frequently invoke (i.e., tweet about) parallels to particular characters or episodes, even going so far as to nickname a group of City Hall enthusiasts the Scoobies, after Buffy’s posse on the show. (Though in retrospect, the young band of council watchers might better have been termed the Watchers Council.)

The following interview with Perks has been edited and condensed, because the conversation wandered and eventually wound up at Numfar:

Is it accurate to say that you find the show nourishing?

Yeah, in a way. It’s a show about how to be a moral actor in an immoral universe.

Well, it’s a world dominated by demons and monsters and “Big Bads,” and all of the characters have to find a trajectory to living morally in that universe. And they’re all compromised. Sometimes they help each other, sometimes they set each other back. It’s an awful lot like being part of a government in our not-very-healthy society.

What’s your favourite season in that respect?

Every season has its own take on it. That’s the marvellous thing.

I mean, The Master [the main villain of the first season] very much looks like a Nazi. The second season is about finding your own moral strength when everyone and everything you love abandons you. The third season is confronting your own dark side.

The fourth season is Frankenstein and the application of technology as a means of social control and how you respond to that. And the way that the characters respond to it is to literally become a collective and draw on each other’s greatest human strengths in order to find a way through.

The fifth season is about the choice between glory and commerce and beauty and actual filial love. The sixth season — it’s amazing I can just do this off the top of my head — is very much about trying to find your identity after losing your moral centre. And the seventh season is all about how to move from being an individual moral actor to being free to empower others to become moral actors.

And these are all struggles that all of us as human beings, and particularly those of us who try to be conscious and intentional of finding the good and the right in this world, have to reflect on.

They’re also very moving stories. It doesn’t matter how many times I watch the last few episodes of the second season, I cry every time.

Do you still manage to rewatch the series annually?

I missed last year. I’m intending to watch it again this year.

How do you structure that when you do it?

I’ll generally get a chunk of time, two or three weeks off, somewhere in the summer. And before I can deal with anybody or imagine any useful project or read any smart books, I feel like I have to go sit in a cave and lick my wounds, and Buffy’s a great way to do it.

Do you find you get new things from it each time?

Yeah. I get new things, or I watch it with a different emphasis.

What do you mean?

Well, watching it through with an eye to Spike’s moral evolution is a different way of watching it. I think the show winds up being as much about Spike as it does about Buffy.

You can watch it just to draw clues about how Willow is being written over the course of the arc. There’s all kinds of fun stuff you can do with it.

Do you feel you get the same benefit from the spinoff, Angel?

I prefer Buffy. I think Angel has a couple of very confused seasons. Out of Whedon’s shows, I’d say that Buffy and then Firefly are the two that do the most for me.

I still haven’t seen most of Firefly and have had trouble getting my partner into it because of the Western-ish setting.

Tell her that it’s actually based on Jewish resistance fighters during World War II.

Yeah. That’s where Whedon got the idea.

It’s about trying to survive on the margins when you’re outcast. There’s a standard romantic-fantasy trope of: hero gets quest hero builds up a small band of unlikely heroes who each has their own quirk, who complement each other to take on evil. It’s a deep, deep myth in human culture.

Do you find yourself thinking about council in terms of that archetype?

The way I think about politics is that the struggles we’re contending with are long, long-term struggles. I won’t live to see the changes that I’m after.

So that idea of working for the good even though the universe you live in isn’t good, isn’t perfect — Utopia is elusive — that very much fits the way I think about my political practice.

Buffy also has several dozen episodes that are about the double bind of leadership. The story of the seven seasons is all about Buffy becoming a moral actor. And her urge to get everyone else to become a moral actor. And the fact that it’s something you have to do alone, but which nevertheless requires a leader. There’s a contradiction in there. And the show unpacks and contends with and struggles with that contradiction.

Is there a particular episode or moral conundrum to which you’ve related?

Oh, lots of them. I think the end of the second season is the most impactful. You have [Angel’s mentor,] Whistler. And what he basically says to Buffy is, “To do the right thing, you will lose everything. And everybody.”

There are moments when you look at an issue and you think the right thing to do is this, and you know it’s going to make you unpopular and politically isolated. That happens. That does happen.

At the same time, the only thing that can work — at least in my view of politics — is if you participate in a broader movement. So it’s the tension of being true to your private moral conscience and at the same time working to build a movement. And because it’s a morally compromised universe, there isn’t always an obvious answer.

The “couple” of them?

So there’s Once More With Feeling, but there’s also the one about Anya, Selfless [which has a musical number]. It’s just heartbreaking. It doesn’t provide you any comfort at all. But nevertheless I find that kind of stuff grounding because so often the challenges that each of us who wants to be a political actor faces are so urgent and localized and technical that it’s very hard to retain, or bring, the touchstones of justice to those issues.

It keeps you in touch with larger values?

It creates a space where you can contemplate your values. Because it puts values questions in front of you over and over and over again. Often without a clear right answer.

There’s a marvellous tragicomedy to it that lets you laugh and cry and feel the absurdity of it all, while at the same time confronting what it is— and I keep saying this — to be a moral actor in an immoral or amoral universe.