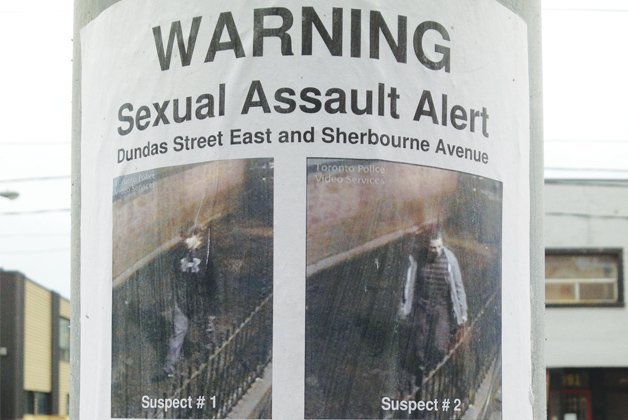 On July 21, Justice Marvin Zuker found Mustafa Ururyar guilty of one count of sexual assault against Mandi Gray, a 28-year-old PhD candidate at York University. In a statement posted to Facebook that day, Gray writes: “I am tired of people talking to me like I won some sort of rape lottery because the legal system did what it is supposed to.” There is no “happy ending” to rape, she adds, despite the many media reports that called the verdict “revolutionary.”

As panellist Paniz Khosroshahy, an undergraduate student at McGill who went public with her sexual assault, points out, Canadian universities are not required to make public or even keep track of the number of reported sexual assaults. As she wrote in the McGill Daily recently, in the US, legislation called Title IX prohibits gender discrimination in federally funded educational institutions. It’s often used by students, like those at Yale and Cornell, to protest their university’s mishandling of sexual assault cases. Canada does not have Title IX. The fate of survivors often falls in the hands of university administrators, many of whom don’t have the most basic training in how to respond to a disclosure of sexual assault.

Other women who spoke at Friday’s panel are some of the most vocal activists surrounding campus sexual assault in Canada. Three of the women – Glynnis Kirchmeier, an alumna of the University of British Columbia, Tarrah McPherson, formerly of Mount St. Vincent University, and Gray – have all filed human rights complaints over their universities’ handling of their cases. They allege that “the failure to respond to disclosures of sexual assault in a manner that is trauma-informed and efficient is a form of systemic gender discrimination.”

In her statement, Gray acknowledges that her status as a middle-class, white person allowed her case to get to trial in the first place, calling her experience “atypical.” “If I am drowning in these systems, what does that mean for those who are not university educated white women who are sexually assaulted?” she asks.

Ellie Ade Kur, a PhD student at the University of Toronto, was in foster care before she started her undergrad at UofT at the age of 16. She was working as a stripper at the time. “You can already put together in your head that I’m not a very good victim,” she says.

Ade Kur says she felt she couldn’t talk to police or administrators about her assault. “A lot of the things I’d seen at the university, based off of how administrators, professors, counsellors treated people like me – treated Black women like me, treated sex workers like me – made me realise that that’s not necessarily a route that I could take.”

“There are always all these strategies that crisis counsellors, sexual assault counsellors, and general assault counsellors in universities will use to deter you from coming forward,” says Ade Kur. “To try and play ‘devil’s advocate’ to your story because they’re ‘prepping you’ for all of the questioning. But really it just serves this purpose to limit the number of reports… and that’s how you show that sexual violence is not a ‘thing.’ But it is.”

An Access to Information request filed by a UofT student newspaper, The Strand, showed that in the 2014-15 academic year there were 137 informal complaints of sexual assault (a number that should be closer to 8,500, considering nearly one in five women will be sexually assaulted as students). Of those 137, 22 became formal complaints, at the discretion of a sexual assault counsellor. Six of those cases were reported to police, and three ended up in court. There were zero suspensions, zero expulsions, and zero disciplinary measures taken by the university.

“Once someone makes a report, how it’s reported – whether it’s documented as a ‘domestic incident’ and not sexual assault, or an ‘interpersonal conflict’ – these are ways that are used to massage numbers,” says Kirchmeier.

2. They’re silencing survivors, rather than working with them

“A lot of the times when you come forward and you speak out, you’re painted as someone who’s really antagonizing the university,” says Ade Kur. As a result, universities are unwilling to listen and respond to survivors’ demands for change.

Kirchmeier, who is filing a third party Human Rights Complaint on behalf of any person who has ever alleged sexual harassment, discrimination, or assault to UBC, says that her university discouraged her from speaking out about a sexual misconduct that she witnessed. An administrator told her that “telling people that there was a predator would be like ‘putting a snake in the grass,’” she says.

Ade Kur says that other students had told her that UofT would force students who disclosed sexual assault to sign confidentiality agreements that would prevent students from speaking publicly about their assault, under threat of legal action. “So this is a multi-million dollar institution against students in an incredibly vulnerable position,” she says.

At McGill, a student working group spent more than two years drafting a sexual assault policy in consultation with survivors, which was released in February. Administrators withdrew support for the policy a month later. The Dean of Students at the time, André Costopoulos, explained the decision to the Montreal Gazette, saying that “some of the language has to be more general.” McGill replaced the student-written policy with a proposal drafted by administrators.

Khosroshahy, calls the new policy “wishy-washy,” noting that it “does not have a clear reporting mechanism.”

Khosroshahy also raises another issue with the new draft policy: “It doesn’t capture the huge problem we have on our campus, which is student-professor relations.” In the 2015/16 academic school year, an anonymous student published a feature in the McGill Daily, Let’s Talk About Teacher, about her relationship with a professor who was notorious for sleeping with students. The piece spurred an outpouring of other stories about student-professor relationships.

The issue is sexual assault on university campuses is especially complicated when it comes to student-professor relationships. Panelists related how students and faculty are under pressure not to disclose experiencing or witnessing sexual assault by a faculty member.

To make complaints harder to track, universities will sometimes move professors between departments after they’ve been accused. “There’s a professor in my old department who has now been moved three times, through three separate departments, after students came forward to talk about sexual harassment,” says Ade Kur.

Kirchmeier called for greater transparency in both the process of reporting sexual assault, and in the bureaucracy of Canadian universities. “Processes without transparency will just be corrupted with self-interest this is true of any large institution,” she says.

She wants mandatory annual campus climate surveys, “so that universities can be compared, and it’s not going to be about managing PR responses.”

3. They’re focused on prevention, rather than response

Universities were funnelling resources and attention towards sexual assault prevention strategies – and being showered with praise for their campaigns. But panelists agreed they should be providing support for students who have already experienced sexual assault with more sexual assault counsellors and government oversight of universities’ handling sexual assault cases.

“One of the things that universities like to do are these kinds of quick fixes, like ‘We’ll give you a sticker, we’ll give you a button,’” explains Ade Kur. “I appreciate the healing space, I appreciate the “#WeBelieveSurvivors” sentiment – I love that, I think it’s fantastic. That does not replace actual action around sexual violence on campus.”

For example, in 2015, UofT employed just one sexual assault counsellor at a university that has almost 85,000 students spread across three campuses.  UofT has announced it will soon open “support centres” across all three campuses. But very often, universities don’t make clear how and where a student should report sexual assault. This forces students to disclose their sexual assault to general administrators, registrars, and receptionists, “people with absolutely no training on how to handle or respond to sexual violence at all,” says Ade Kur.

“Universities offer [sexual assault policies] as this kind of final solution to campus sexual violence, which they are not. Policies tend to be forgotten, or misapplied, and their application varies by different administrators,” Khosroshahy says. “Unless universities are committed to actually using those policies, we can’t really hope for much change.”