NOW MagazineNewsHow Ford’s homophobia led to the “most amazing day”

How Ford’s homophobia led to the “most amazing day” 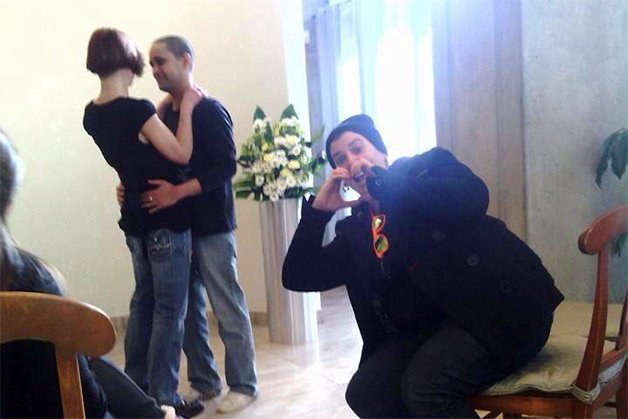 Lucas with the mystery couple in the City Hall wedding chapel. (Photos courtesy of Lucas.)|Left: Jacqie Lucas and others confront Mayor Ford in his office. Right: Lucas witnesses strangers' wedding. 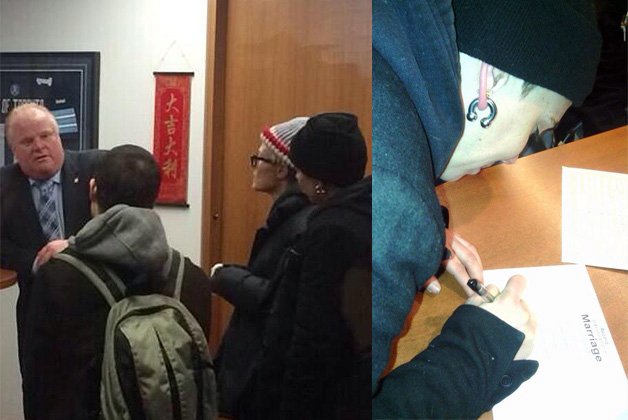 On Wednesday, as a perfect little act of passive aggression, Mayor Rob Ford planted a small Canadian flag on his desk at Council.

This pissed Jacqie Lucas off.

Lucas was one of the handful of protesters who’d visited the mayor on Friday, Feb. 7, to express their displeasure with his insistence that the rainbow flag be brought down from the ceremonial pole on the roof of City Hall. (Ford has maintained that Olympic athletes should be honoured with the flag of Canada instead, vigourously ignoring the fact that many Canadian flags – including a very large one in a place of prominence – fly outside of City Hall already.)

So, after trying to arrange for councillors to have rainbow flags for their own desks, Lucas expressed her frustration in a Craigslist missed connections post that recounted the day she went to see the mayor.

She put it up on Wednesday night, where it remained for about 10 minutes before getting flagged for removal and deleted. No reason was given, but it may have had something to do with it not being a missed connection in the conventional sense. Though it does sort of involve a fleeting encounter at a wedding.

With Lucas’s permission (and only some light editing), we present it to you here.

City Hall can be a fucked up place. But it can also be a really beautiful one.

I was in a rush when I ran into city hall. You guys were passing the elevator I was in and I shouted “WHAT FLOOR IS ROB FORD’S OFFICE ON??” You didn’t know either…. it’s ok.

I went up to his office and tried to book an appointment.

The assistant looked me up and down (not in that hot way but in that you-are-never-getting-in-here way).

Rob Ford had thrown a big hissy fit over the Pride flag a few hours earlier, and this fella probably knew why I was there since I was exhibiting my best butch aura.

“I’m sorry, but he is just booked All Day Long. All Day Long.” I had to force him to take my name and number, telling him I would be willing to book an appointment for whenever he has time. *sidenote still waiting for a call.

Instead I visited Norm Kelly to offer my sincerest thanks for being a voice of reason in the flag flop. We had a great conversation and he offered and gave a GREAT hug. “No brainer!” said Norm. “Being the host of World Pride, we should have been the First City to put the flag up. We should be the leaders in equality.” I’m getting a little fuzzy warmth remembering.

Still though, I never got to say my piece to FORD NATION and I left feeling defeated.

That’s when we ran into each other again.

The two of you asked why I was there visiting Fordsie. For a moment, I panicked.

Being queer and on Ford’s base, I had an irrational memory of when me and two friends invited the LGBTQ community to Mama Ford’s house for Ford stock…. or Ford ville… Ford Fest? That house in Etobicoke with bronze animals frolicking all over the place (p.s. still sore he said there would be pony rides and there wasn’t any). After we did that, we dealt with death threats and HATE mail. (Surprised?)

I gave a few quick shudders and did what Ford has always been afraid to do… tell the truth even though it may hurt you.

“I am here to ask Rob why he wants to take the Pride flag down!”

The two of you immediately smiled and said we were alike in politics and asked if I would be willing to be a witness in your wedding.

It was a nice sweet wedding and I loved being a part of it soooooo much.

The world works in mysterious ways, because when I left after your wedding I just ran upstairs to see if I could say hi to Kristyn Wong-Tam and BAM FORD APPEARED.

Apparently he came out of his office to give a supporter a Ford Nation shirt. (Is that campaigning in the office?) I went in with two of my friends and had a short shitty conversation with him that consisted of a few comments like:

“Would you be ok if both flags were flying up there?” I asked, knowing they were already standing across from each other…

“I think it’s awful you want it down.”

“You are entitled to your opinion….. I saved the taxpayers money.” (Ford)

What a bullshit answer.

But you know what? What started as an attack on something I feel is a big part of my life and really left me feeling empty turned out to be the most amazing day, meeting the most amazing people, having conversations with strangers being involved in a wedding.

I have pictures of you getting married and me looking on.

The reason I’m writing this is when I was signing your wedding certificate, I said, “You know you owe this to Rob… us meeting. You owe him your vote….”

I just wanted to make sure you knew I was joking.