The U.S. presidential election isn’t really over until the Electoral College votes December 19 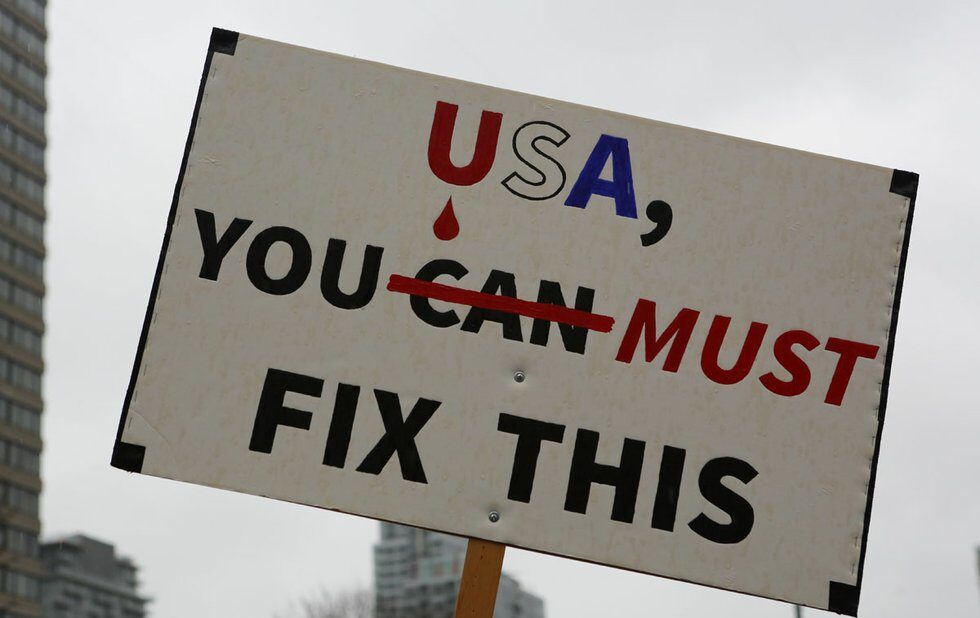 Canadians may know Drake, but many might not know that without Gil Scott-Heron, the godfather of rap, there’d be no Drake.

Around the time of the Watergate scandal, Heron wrote something called H2O Gate Blues, in which he rapped that “…America’s faith is drowning beneath that cesspool.”

Today Americans’ and Canadians’ faith is drowning beneath a new cesspool. Protests have raged across the U.S. every day since Donald Trump became president-elect. There is no sugar-coated narrative to tell children how a person like Trump achieved such a reward.

And now that it’s been widely reported that the Kremlin was indeed in contact with the Trump campaign in the lead-up to the November 8 vote – and that Russian hackers may have had something to do with leaking Clinton’s emails to Wikileaks – the victory of Trump reeks of something undemocratic.

Donald Trump said the election would be “rigged,” but few took that to mean in his favour.

Instances of blatant and hostile interference in the election from outside forces – not to mention, allegations of Black voter suppression in key Democratic battlegrounds like North Carolina – have led to calls for an immediate investigation.

But all three branches of government in the United States will be under the control of the Republicans, as will the Supreme Court after Trump makes his selection to fill the seat left vacant by the death of Justice Antonin Scalia and the imminent retirement of Justice Ruth Bader Ginsburg.

So who will authorize an investigation? Is there a way for people to fight back?

A Change.org petition, Electoral College: Make Hillary Clinton President On December 19, is rapidly getting signatures online – at last count, more than 4.5 million. The petition addresses an aspect of U.S. presidential elections that is confounding to many: the Electoral College.

As the petition rightly points out, the U.S. presidential election of 2016 isn’t really over until the Electoral College votes. Established by Article Two of the Constitution, the system was put in place so that, as Alexander Hamilton, James Madison and John Jay write in The Federalist Papers, “the office of President will never fall to the lot of any man who is not in an eminent degree endowed with the requisite qualifications.” In other words, someone like Trump.

But the Change.org petition is calling on the Electoral College to vote for Clinton when it meets on December 19 to formally cast its ballots and make the election results official. The petition argues that Trump is “unfit to serve” and notes that “Secretary Clinton won the popular vote,” by more than 1.67 million votes and climbing. Trump himself called the Electoral College “a disaster” in 2012. He’s since changed his tune.

Though some states hold elections to choose electors, they mostly serve at the pleasure of state party officials. They exist solely to cast a vote as they are directed.

Why was the Electoral College created? Ostensibly, it was to count the population for reasons of taxation, seats in House of Representatives and allotment of the number electors each state would have.

It’s never mentioned specifically in the Constitution, but the main motivation behind the system was the white male elite’s mistrust of ordinary people. As historian Ray Raphael has pointed out, the founders “wanted government by the people, but not the people ruling on a daily basis.” Indeed, from the first American presidential election in 1789 to that held in 1820, there is no record of what the popular vote was – only the Electoral College vote.

The notion of unelected officials having a major impact on the precious machinery of democracy is not completely foreign to Canadians. According to a May 2016 Angus Reid poll, “Two in three Canadians say the Senate is ‘too damaged’ to ever earn their goodwill.”

A true democracy that trusts the people and does not exist for a white male elite would never have created an Electoral College. This is not to suggest that these unelected individuals are not dedicated public servants with a commitment to preserving and upholding the integrity of the electoral system.

Trump’s extremely negative words and behaviour have generated strong anti-Trump feelings. He continues his unprecedented assault on women by vowing to appoint very pro-life Supreme Court justices who would overturn the iconic 1973 Supreme Court decision Roe v Wade that decriminalized abortion and gave women the right to choose to end a pregnancy.

Democracy is supposed to be the political will of the people expressed through suffrage and manifested in the agendas, policies and legislation proffered by those who get elected. Instances of blatant and hostile interference from outside forces in cahoots with the Trump campaign mean the election cannot retain its aura of pious legitimacy.

In H20 Gate Blues, Heron offers a simple solution: “How much more evidence do the citizens need / That the election was sabotaged by trickery and greed? / And if this is so and who we got didn’t win / Let’s do the whole goddamn election over again!”