The prime minister could nix the Saudi arms deal, but Parliament won't pressure him to cancel and lose Canadian jobs 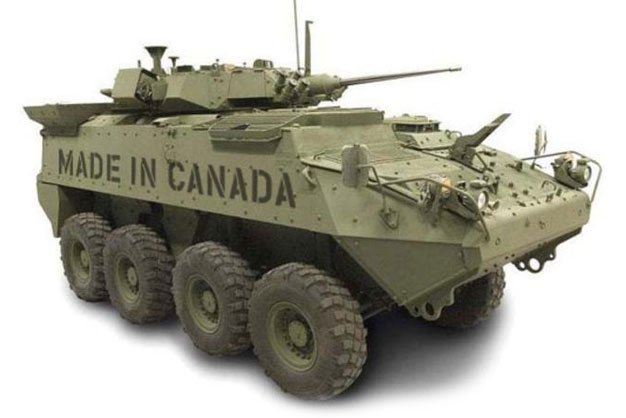 Light armoured vehicles like this are part of $15 billion contract.

It’s like a scene out of George Bernard Shaw’s anti-war play Major Barbara.

The Liberals have tried to downplay the sale of military equipment (a secret $15 billion blockbuster deal for light armoured vehicles, or LAVs, signed by the Harper Conservatives in 2014) to Saudi Arabia in the wake of that country’s beheading of 47 people last week. But the matter of Canada’s cozy relationship with that perennial human rights violator, and the boon that relationship has been for Canadian weapons makers, constitutes a major test of Justin Trudeau’s foreign policy intentions.

The Toronto Star uncovered a foreign policy briefing advising the new PM to keep Saudi Arabia as an all-weather friend to “serve Canadian commercial and possibly security interests.” So far there is no indication that that thrust will change under the Liberal government.

And Trudeau is arguably missing an opportunity to help remake the region, to be “the compassionate and constructive voice in the world” he talked about the day after the election, when he declared Canada back as a force to be reckoned with on the world stage. Indeed, refusal to cancel the contract puts Canada out of step with major weapons-exporting countries like Germany and Sweden, which have in the last few weeks either suspended or deferred weapons sales to the Saudis, while Belgium has refused outright the latest Saudi request for weapons.

Foreign Affairs Minister Stéphane Dion insists that “what is done is done,” and that Ottawa cannot interfere with a “private company contract.” But technically the deal is between a Crown corporation, Canadian Commercial Corporation (CCC), the federal agency that acts as a broker for Canadian military firms, and the Saudi government. It can still be undone.

More to the point, Canadian export policy prohibits Canada from signing deals with countries “whose governments have a persistent record of serious violations of the human rights of their citizens, unless it can be determined that there is no reasonable risk that the goods might be used against the civilian population.” That policy, as the Global Affairs Canada website explains, “strives to ensure that Canadian military exports are not prejudicial to peace, security or stability in any region of the world or within any country.”

Disarmament proponents say the focus now should be on cancelling the export permits for the LAVs.

But General Dynamics Land Systems (GDLS), the London-based military contractor picked by the Saudi kingdom to produce the vehicles, would likely sue Ottawa for contract interference. Then there are the 3,000 jobs over the next 14 years the contract would create.

On that front, London North Centre MP Peter Fragiskatos has been front and centre in defending the deal, though in his former role as political science professor at King’s University College he was openly critical of Saudi Arabia’s human rights record. He said in an interview with the CBC that the deal allows Canada “a seat at the table” when it comes to human rights and the shifting political sands in the Middle East.

Trudeau famously called the LAVs jeeps during the campaign. To refer to them as light armoured vehicles is a misnomer as well. The vehicles are outfitted with a 105 mm cannon described as a “high-pressure gun with an advanced autoloader to deliver high lethality at very light weight.”

The supply of more than 2,000 Canadian-built armoured vehicles to the Saudi regime since 1991 has not only strengthened that country’s National Guard, whose job it is to control the domestic population, but it also appears to have facilitated the Saudis’ 2011 intervention in Bahrain to put down that nation’s pro-democracy Arab Spring protests. Saudi military actions in Yemen, where it is leading an Arab coalition to reverse the ouster of president Abd Rabbuh Mansur Hadi, have been condemned as war crimes by the UN.

The Canada-Saudi relationship has been a windfall for weapons manufacturers and has led to significant legal changes bolstering Canada’s weapons export industry.

Following the first Gulf War against Iraq in 1991, Canada ignored calls for regional disarmament, instead making Criminal Code changes at the behest of two weapons dealers, Kitchener’s Diemaco (now Colt Canada) and GDLS’s predecessor, General Motors Diesel Division. Those changes allowed the two companies to import automatic weapons (which were attached to the first Canadian batch of Saudi-bound armoured vehicles) and granted permission for their production and export as well.

At the time, the opposition Liberals took a different tack, issuing a 1993 paper, Defence Conversion, A Liberal Priority, that sought to “encourage Canadian defence companies to adjust and move away from a dependence on military production and export.”

But once the Liberals regained power later that year, Canadian weapons sales to Saudi Arabia and a host of other human rights violators, including Indonesia, Algeria, Colombia and Egypt, continued their meteoric rise.

Because the new contract is secret, it is unclear what legal and economic ramifications would ensue if it were cancelled. Or why the details have not been made public despite calls from Amnesty International and others. Trudeau has promised more transparency.

Ken Epps of Project Ploughshares, the Waterloo-based research and policy organization, says the Saudis “often write into a contract that no information about it will be made public,” which is why GDLS appeared to be caught off guard when then industry minister Ed Fast publicly announced the deal. Epps says that if the contract were broken, the CCC could be held liable by both the Saudis and GDLS.

Dion’s shrugging comment that if Canada cancelled the contract other countries would be lining up to fulfill it rings hollow. Canada is the only NATO member not to have signed the 2014 Arms Trade Treaty (ATT), which lists armoured combat vehicles among controlled items of concern.

The ATT would give teeth to Canada’s broadly interpreted export guidelines, which also allowed 2013 weapons sales to Egypt, Israel, Libya, Oman, Thailand, the UAE and Algeria. Dion has not mentioned it, but his ministerial mandate letter clearly directs him to sign Canada on to the treaty.

Reneging on the Saudi LAV contract could in fact change the regional picture in the Middle East significantly.

But the Liberals are unlikely to face Parliamentary heat over the deal, given that the Conservatives signed it and the NDP is reluctant to provoke a rift with the union whose workers currently produce the vehicles.

The topic has been discussed at a number of recent London Labour Council meetings, where human rights concerns are pitted against thousands of good-paying jobs.

A London Unifor representative reportedly called out NDP leader Tom Mulcair after he raised the possibility of reversing the deal during one of the election debates.

The party’s foreign affairs critic, Hélène Laverdière, did email a statement to NOW saying that “we categorically must do better going forward.”

London trade unionist and peace activist David Heap, who was involved in a 1980s campaign to convert the cruise-missile-producing Litton Systems in Rexdale to civilian use, says, “It’s important not to single out workers at a particular plant. What we need is a collective effort to create a green, peaceful economy where good jobs do not depend on developing and building machinery used to make war.”

Heap notes that before GDLS attached itself to the Saudi weapons assembly line, the London plant built locomotives. A federal government pursuing green alternatives could keep those good jobs in London by making a massive investment in railway infrastructure.

But the CCC has no plans to stop seeking out new markets for Canadian weapons makers – or to answer questions about how the Saudi deal squares with current export control guidelines. A number of queries from NOW on that count have gone unanswered.

Last year, the CCC was active in 57 countries while attending the world’s largest weapons fairs, and plans to host international delegations at the CANSEC weapons bazaar in Ottawa at the end of May.