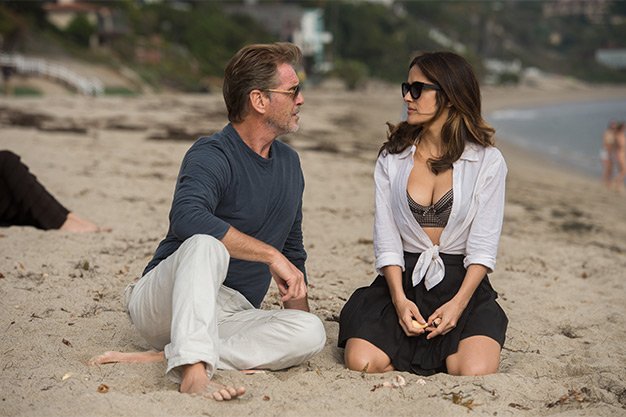 Tom Vaughans romantic comedy trivializes so many serious issues, it should be called A Morons Guide To The Real World.

Richard (Pierce Brosnan), a randy Cambridge University English prof his philandering father (Malcolm McDowell) taught him everything he knows regularly sleeps with his students and…. What? You cant get away with that on any campus these days, but as in Woody Allens Irrational Man, Vaughan and screenwriter Matthew Newman dont seem to notice.

When Richard gets his student Kate (Jessica Alba) pregnant, he agrees, incredibly, to marry her and moves with her to California. When she leaves him and their son (an appealing Duncan Joiner) in their gorgeous seaside beach house, Kates sister Olivia (Salma Hayek), whom Richard has previously met, moves into the attached cabana. Richard decides to play peeping Tom in supposedly cute ways.

Their blooming romance and Richards attempts to maintain his residency status make up the main plot line. The sequence where he tries to return to the U.S. via Mexico is gobsmackingly disrespectful of the dangers desperate people face trying to cross borders.

Just one more element that makes this pic so obnoxious.