How to support sexual violence survivors and fight rape culture 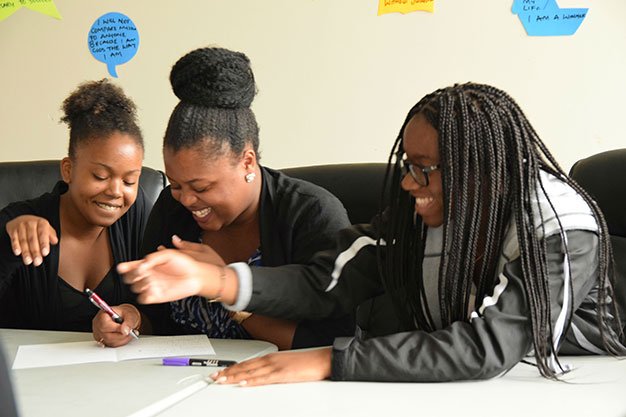 Black Women In Motion creates safe spaces for young women and girls to talk about sexual violence and consent. This weekend

When Monica Samuel was in high school, attitudes towards sexual violence and consent were very different. A decade ago, the term “rape culture,” though coined in the 1970s, was rarely heard in public or used by mainstream media. Sexual assault and rape survivors were often doubted and considered suspect.

“It was still about what you were wearing and how you were acting,” Samuel remembers. “There was a lot of victim blaming and shaming, and folks jumped to conclusions that you shouldn’t have worn a skirt.”

In recent years, however, that conversation has shifted.

High-profile trials, including convicted Stanford University rapist Brock Turner and more locally, Jian Ghomeshi’s sexual assault case, have advanced rape culture, definitions of consent and public treatment of survivors into mainstream dialogues. Post-secondary campuses across Canada have been forced to reexamine their strategies for handling such cases. Activists, artists and survivors are able to raise their voices louder than ever. A tide is turning.

Samuel, who runs Black Women In Motion, a Toronto-based initiative that seeks to empower girls and young women, says definitions of consent and sexual violence have gotten clearer. “People can identify it and say it more freely. We can now say that these experiences are not OK.”

On October 15 and 16, Black Women In Motion hosts the second annual This Means WAAR: Weekend of Action Against Rape Culture. The two-day conference, hosted by York University and open to anyone between the ages of 16 and 24, includes workshops, panel discussions and activities tackling cultural attitudes towards sexual violence and the role each of us play in fighting it.

“I’ve found that as long as you create a space for folks to talk freely, for the most part, young people are comfortable discussing rape culture,” Samuel says. “But I still think there’s this lack of understanding around consent being negotiable, that a person can retract it or change their mind. That’s something I still think people don’t have a full grasp of.”

One of this year’s conference guest is the Carefree Black Boy Project, a website dedicated to breaking down stereotypes of masculinity and creating dialogues around sexuality, spirituality and mental health as they pertain to Black boys and young men.

Samuel suggests that holding everyone accountable is the first step in turning rape culture into consent culture.

“If you see sexual harassment happening, if you hear catcalling, someone degrading a woman, it’s calling it out and being an ally to the person affected by it,” she adds. “It’s about putting another dude in check when you hear an inappropriate comment. If someone says, ‘I went to this club and she was a total bitch for not coming home with me and gave me all these mixed signals,’ it’s about speaking up and saying, ‘That is rape culture.’”

While the conference is open to all genders and races, Samuel says that some conversations may be directed more specifically at Black girls and young women. As a survivor of sexual violence raised in an Afro-Caribbean family, Samuel says her experience of telling others was deeply affected by cultural attitudes towards sexual assault and rape.

“I feel like when it comes to coming forward about sexual assault, the treatment is different as a Black woman than someone who isn’t a person of colour. Black bodies are hyper-sexualized. Because I’m Black and a woman, I’m supposed to be readily available,” she says. “I think it’s important that when we talk about sexual violence, we talk about it in the context of people who look like us.”

This year’s conference theme is Men And Women As Allies. Registration is free and available online or in-person on both days of the conference.

For those unable to attend, we asked Samuel for advice on how we can all be better allies to survivors of sexual violence. Her suggestions are below.

1. Say, “I believe you.” Telling survivors that you hear them, that you care about them and want to validate their feelings is important.

2. Don’t say you know how they feel, especially if you haven’t been through a similar experience. Let them express themselves and validate their emotions.

3. Be realistic in the support you’re offering. If you’re not a personal support worker or counselor, it’s OK to say, “You can come talk to me anytime. Other than that, I can maybe point you in the direction of where you might get help.”

4. All the person to have time and let them go at their own pace. Don’t immediately say, “You need to go to the cops right away or go to a counselor.” Encourage them to feel their feelings of pain and anger, and let them know this could take a long time to recover from, and that’s OK.

5. Let them know you’re thinking about them. Whether it’s dropping a text, sending a card or checking in and going for coffee, ever bit of support helps.