How will Breaking Bad end?

Knowing they'll be wrong, some of NOW's Bad-heads make their predictions 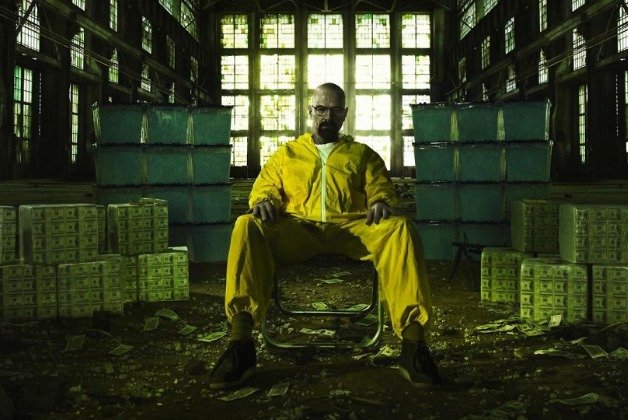 Nobody really knows how Breaking Bad will take its bow, exactly, but that didn’t stop three NOW-niks from making their best educated guesses. Spoilers ahoy!

Throughout his two-year transformation from Mr. Chips to Scarface, Walter White has always claimed he does everything for his family. That’s bullshit, as any viewer knows. Greed, vanity and especially pride have ruled his actions more than devotion to his flesh and blood.

Which makes me think that, in order to drive home the tragic irony, someone from his immediate family must die in a horrible, horrible way. My guess is Walt Jr., who, next to poor “Mama”-loving Holly, is the closest thing to an innocent in the show and is probably now back to calling himself Flynn to distance himself from his dad.

So how does Flynn die? Two theories:

1) Now that Jesse knows that Walt let Jane die, and is essentially responsible for the living hell that is his life, I wouldn’t be surprised if he escapes from Todd and the Nazis, tracks down Flynn and kills him and then Walt. How will Jesse escape? Via an explosion in the lab, perhaps – remember, he was taught by the best – or, once the dust settles if Walt charges in with that M60. And remember: Walt likely assumes Jesse’s dead, so there will be an element of surprise. Once Flynn’s dead, I think a final Jesse vs. Walt confrontation is inevitable. And what a final irony that Jesse, Walt’s surrogate son, will do the killing.

2) Somehow chemistry will play a part in Flynn’s death. Some of the most thrilling sequences in the series have involved Walt using his grey matter to escape seemingly impossible situations: the makeshift battery to get the stranded RV out of the desert, the fulminated mercury to create an explosion in front of Tuco, the ricin to… what, exactly?

The ricin must play a part. It’s been used too much – especially in that tense scene with Tuco and the bell-ringing Hector Salamanca – to not make its way into the final episode in a big way. Walt made sure to grab it from behind the electrical socket when he broke into his dilapidated home, and whoever his intended target is – Uncle Jack? (warm) Lydia? (warm) Jesse? (warmest) – somehow the plan will backfire and Flynn will end up taking it. That would be positively Shakespearean: Walt’s scientific skills kill his son. If Walt’s face became a distorted tragedy mask when Hank died (“he’s family,” Walt pleaded to Jack), wait till you see him react to the death of his boy.

Walter White will say he did everything for his family. And his family will have paid the price.

“The most terrifying fact about the universe is not that it is hostile, but that it is indifferent.” – Stanley Kubrick

So many words have been written about the clockwork universe of Breaking Bad, where every action is connected to a previous action and all of Albuquerque, New Mexico is but the stage for the event cascade that followed Walter White’s decision to cook meth.

As with the “theory” of intelligent design, the existence of clockwork presumes a creator has made the clock. In this case that’s Vince Gilligan, creator and showrunner of Breaking Bad, who’s demonstrated a remarkable resourcefulness over the past six years in plotting a narrative that’s completely satisfying on a dramatic basis – but almost entirely unpredictable. Which means I have absolutely no idea what’s going to happen in the finale.

I thought Breaking Bad would end with Hank Schrader reclaiming his badass manhood by bringing Walter White to justice. That ain’t happening.

I thought Breaking Bad might end in total misery, with Walt dead and the money gone. And then, in a final ironic note, his lottery ticket – played, ingeniously, with the GPS coordinates of his cache of blood money – would pay off, giving his family the inheritance he’d wanted for them all along. That probably won’t happen either.

I thought Jesse might kill Walt, and himself, by intentionally blowing up a meth lab – the guilt-ridden murderer and his creator consumed by cleansing fire, straight out of the end of Bride Of Frankenstein. That likely won’t happen either Gilligan doesn’t seem like the kind of person who believes in a righteous universe, or in giving Jesse that kind of heroic final gesture.

Now I’m not sure who’ll be left standing at the end of the final episode – or who even cares enough to try to survive. Walt’s a husk of a man, in the final stages of his cancer and fully alienated from his beloved family. Jesse seems cursed to walk the earth in misery as everyone around him falls. Skyler and Marie and the kids are hopefully in a DEA bunker now that Walt’s resurfaced. And in a perfect world, Badger and Skinny Pete are off at Chuck E. Cheese, freeballing the plot for the next Star Trek movie in blissful ignorance of the Shakespearean tragedy rumbling outside.

Honestly, I just want someone to take out Meth Damon and Lydia Parrotface, the characters I loathe most of all. Maybe with a little ricin in their tea.

In a new introduction to his great, totally prescient piece for The New Inquiry that laid out the racial politics of Breaking Bad even before the show introduced its endgame white supremacist baddies, Malcolm Harris writes that “[t]he end of the series looms behind this half-season the way a long novel’s final 50 pages feel in your hand whatever is happening is going to be all over soon.”

Jane Austen wrote something like this toward the end of Northanger Abbey, directly addressing readers “who will see in the tell-tale compression of pages before them, that we are all hastening together to perfect felicity.”

There are simply too many dangling loose ends – will Jesse escape the Neo-Nazi compound? Will Walt’s cancer off him? Who is the ricin for? Will Twaüghthammer reunite? Will Mister Magorium save his Wonder Emporium? – for Breaking Bad to achieve anything close to perfect felicity. Or at least without its 70-plus minute finale on Sunday playing out like an extended riff on the “whatever happened to…” style credits of Animal House or Fast Times At Ridgemont High (“Flynn White went on to found a struggling chain of breakfast restaurants across the American southwest”).

Thing is, Austen was being ironic. The “tell-tale compression” – of pages, of dramatic beats of a television series ticking away like the 60 Minutes stopwatch – may intimate the nigh-ness of a conclusion, sure. But there is no perfect felicity. Not in literature. Not in life. Breaking Bad is an exactingly constructed television program, but a neat-and-tidy ending would fly in the face of the show’s tedency to constantly topsy-turvy expectations. Instead of resolving, I feel like the show will explode, self-immolate.

If creator Vince Gilligan’s never-not-quoted conception of the show graphing Walter White’s transformation from Mr. Chips to Scarface is to be believed, then maybe it’s pertinent to remember Walt’s tossed-off evaluation of DePalma’s parable of capitalist decadence: “Everyone dies.” Todd, Lydia, Uncle Jack and his white supremacists gang, and certainly Walt will end up dead (prediction: Walt takes the ricin himself, in a last attempt to prove captain of his own fate).

In a way, Walt’s fate is the least interesting thing. He’s been a waking corpse since day one. Since Jane died, and certainly since he was strong-armed into killing Gale, Breaking Bad’s central skirmish has been over the soul of poor, tortured, long-suffering Jesse. But there won’t be, I think, redemption for him. Instead, Jesse will realize his own Scarface-ian destiny, the one he articulated upon his return from rehab in season three. “I accept who I am,” he tells Walt. “I’m the bad guy.”

As Pacino’s Tony Montana put it, we need the bad guy. And with Walt dead, Jesse taking up the Heisenberg mantle (and maybe even the porkpie hat) and cooking Blue Sky on his own seems like a fitting end, a chance to finally apply himself. It’s not perfect, but it seems the most judicious realization of the show’s grandly tragic plotting. Catharsis, bitch.