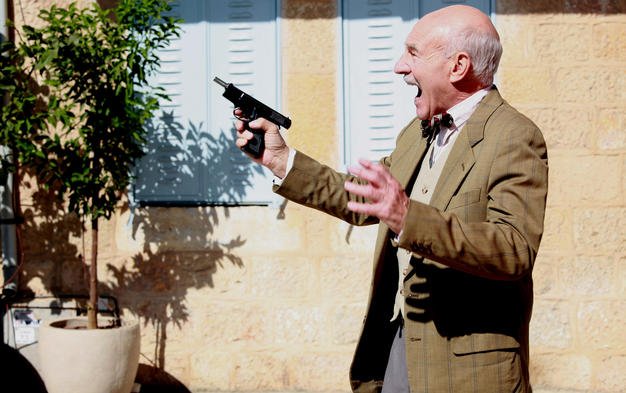 Hunting Elephants can’t even be enjoyed ironically believe me, I tried.

Swinging wildly between annoyingly frantic farce and shameless melodrama, director/co-writer Reshef Levi’s godawful heist comedy follows an obnoxious 12-year-old (Gil Blank) and his grandfather (Sasson Gabai), who plot to rob a Jerusalem bank with the help of two other seniors.

If at first that premise evokes fond memories of the fine George Burns comedy Going In Style, well, it’s probably supposed to. But Martin Brest’s bittersweet 1979 film let veteran character actors riff elegantly on their established personae by contrast, Levi doesn’t even seem to see his senior schemers as people who existed before the movie started.

Everybody insults one another constantly, and they often wave guns around because Levi believes old people being threatening is inherently hysterical. But even the endlessly game Patrick Stewart throwing himself into a performance of Funiculì, Funiculà can only get us so far. Some subtitles. 110 minutes.