NOW MagazineCultureMusicalsI Love You Because

I Love You Because

I LOVE YOU BECAUSE by Joshua Salzman and Ryan Cunningham (Angelwalk). At the Toronto Centre for the Arts Studio (5040. 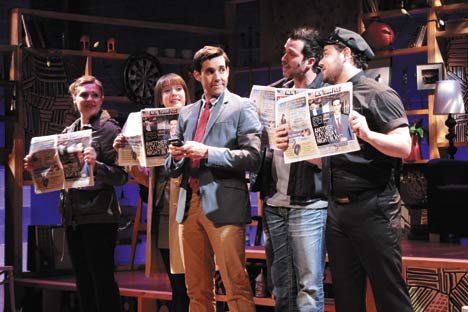 In a few short years, Angelwalk Theatre has carved out a nice little niche for itself mounting fine productions of smart, imaginative off-Broadway musicals.

They succeed once again with I Love You Because, an adorable show about a bunch of cynical 20-something New Yorkers looking for love in the caffeine- and alcohol-fuelled city.

Austin (Jeff Madden) is a buttoned-down greeting card writer who’s just caught his girlfriend in bed with another guy, so his brother Jeff (Jay Davis) convinces him to date other women. Enter Marcy (Elena Juatco), a spontaneous photographer who’s recovering from her own dating disaster, helped by her bestie, Diana (Gabi Epstein).

At first Austin and Marcy detest each other – this is, after all, a (very loose) update of Jane Austen’s Pride And Prejudice – while Jeff and Diana hit it off doing the friends-with-benefits thing. But before you can say Sex And The City, the plot takes a few twists.

There’s lots to enjoy in Joshua Salzman’s music and Ryan Cunningham’s lyrics, particularly actuary Diana’s patter song about how long it takes to recover from a broken heart (complete with whiteboard illustration), Marcy’s touching act-one finale about not being ready for love, and several lively ensemble numbers in the second half.

Director/choreographer Darcy Evans stages the show effectively, making nice use of Scott Penner’s two-tiered set, which, with a simple turn of an Ikea-like table, alternates between cafe and bar (Michael DeRose and Cara Leslie double as bartenders and baristas, and chime in charmingly throughout.)

Evans can’t quite fix a few of the book’s problems, like the weird fact that the poetry-writing Austin is a Republican or that we’re watching a New York-set musical where every character is straight.

But the cast and band, helmed by Lily Ling, make you forget all that with their energetic, full-throttle performances. The stand-out is Epstein, who invests her controlling Diana with so much empathy and inner life that she almost steals the show.