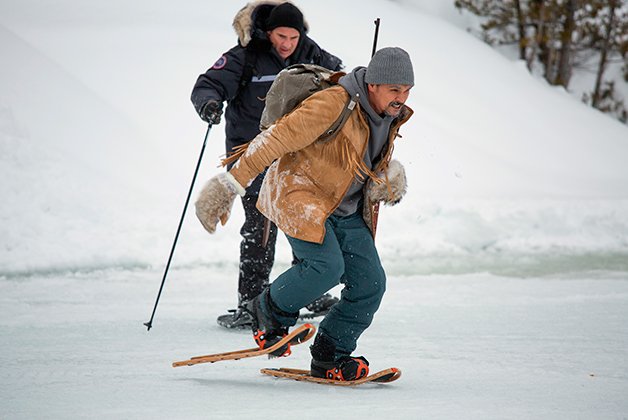 Dominic Purcell (left) and Adam Beach try to stop a trio of killers in the supremely stupid Ice Soldiers.

Here’s the worst thing about Ice Soldiers, a crappy action movie about a team of scientists and military contractors chasing three defrosted Soviet murder men around the Arctic: the soldiers are not actually made of ice.

When you’re making a genre picture, you at least have to deliver on the premise. Humanoids From The Deep, The Thing, The Terminator – yup, they delivered. But Ice Soldiers has no ice soldiers.

Instead, the baddies of Jonathan Tydor’s rote screenplay are genetically engineered Aryan killing machines dressed in proper Mad Men business suits, frozen in the Great White North when their plane crashed in the Arctic Circle during the Cuban Missile Crisis. Half a century later, a driven egghead (Dominic Purcell) and his cranky escort (Michael Ironside) thaw them out, unleashing murder-man hell on their isolated camp.

It’s all pretty generic, and very stupid, though it perks up once Adam Beach turns up as a trapper who aids in the quest to stop the killers. And director Sturla Gunnarsson (yes, the guy who made Such A Long Journey and Force Of Nature: The David Suzuki Movie – a man’s gotta eat) and cinematographer Stephen Reizes at least tried to deliver a movie that looks like a feature film rather than a cable project.