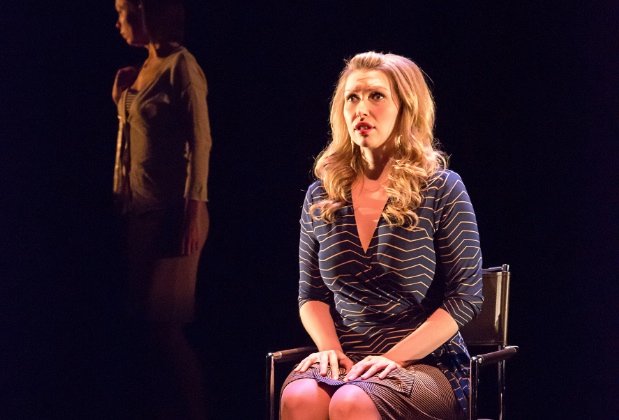 An intriguing puzzle constructed as a series of monologues, Nicolas Billon’s Iceland looks at greed and sexuality, passion and compassion.

A Toronto condo is the focal point that brings together a trio of characters: Halim (Kawa Ada), a sleazy real-estate agent who sees money as the lifeblood not only of business but also sex Kassandra (Lauren Vandenbrook), a visiting Estonian student who makes her living as an escort and the devoutly religious Anna (Claire Calnan), who feels she must reprimand those, including herself, who blaspheme or use improper language.

At the start, Billon teases us with the mystery of how these people connect. But skilfully wrought monologues delve into story and character, weaving the three narratives into a finely knit mesh.

Under Ravi Jain’s clean, precise direction, the three deliver their speeches directly to the audience, literally taking the spotlight at centre stage. Occasionally another figure in the shadows of Kim Purtell’s atmospheric lighting responds to a question or comment, but the emphasis is always on the speaker as the plot elements fall into place.

This isn’t the first time that the playwright’s relied on solo speech to draw us into his characters’ world. In the SummerWorks hit Greenland, geographic change echoes a family’s drifting apart Faroe Islands, recently workshopped at Rhubarb, is a monologue in which a young woman in a support group discusses her concern for the whales and reveals, along the way, some familial concerns. (Coach House Press has just published Iceland, Greenland and Faroe Islands under the title Fault Lines.)

Vandenbrook’s Kassandra is low-key and seemingly in control of the potentially dangerous situation in which she finds herself. Working to further her academic dreams and care for her family back in Estonia, she offers some fascinating details about a life that could fill an entire play.

What her performance lacks is the suggestion of other emotions, including fear, beneath the surface. Kassandra puts on a brave front, but there’s more happening that Vandenbrook doesn’t yet hint at.

Ada’s self-impressed and self-satisfied Halim is the crudest of jokers, needling us to laugh at his off-colour humour, reprimanding us when we don’t, as he describes his skill at flipping properties and buying sex. Seeing an inherent link between capitalism and sex, he worships at the altars of both.

It’s Halim who gives meaning to the play’s title: the collapse of Iceland’s three major banks were a tipping point for the international credit crisis. As this weasel of a salesman recounts the collapse of that island’s fishing industry, we realize how happy he is to gorge himself at the expense of others.

That brash performance makes us laugh one moment and feel uncomfortable the next. We alternately loathe him and are mesmerized by his chutzpah.

Calnan’s Anna is the most striking of the three. From her childhood memories of a pet guinea pig to her realization that she’s been tricked out of her one adult refuge, Anna is shy, insecure and fearful of those not part of her small circle of (probably equally quirky) friends.

Allowing her growing anger with Halim to build with cold ferocity, Calnan expertly turns a seemingly ordinary statement into the most lacerating of comments. Her delivery of “my mother is a blunt instrument” speaks volumes about Anna’s life.

If you didn’t see this SummerWorks hit when it ran last August, don’t miss it now.