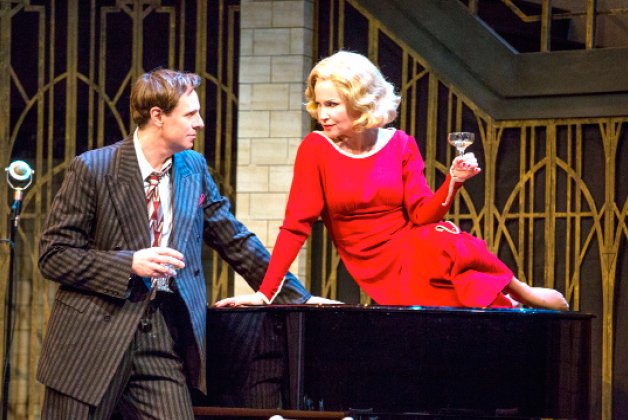 It’s a pleasure to discover a largely forgotten script staged by talented artists, and that’s just what you get in Soulpepper’s production of Robert E. Sherwood’s Idiot’s Delight.

Written in 1936, the Pulitzer Prize winner delivers a powerful anti-war message three years before the start of World War Two with a combination of comedy, chilling foresight, romance and song-and-dance.

At a resort in the Italian Alps – it was Austrian until the League of Nations changed its nationality – guests are scarce until the government orders the border closed and a trainful of travellers descends on the hotel.

The set-up is suggestive of other 30s plays and films such as Dinner At Eight, The Women and Grand Hotel: a group of disparate people are brought together by circumstance and reveal themselves in relation to each other. Here they include a German scientist (William Webster), British newlyweds (Mikaela Davies and Gordon Hecht) and a French-born Marxian revolutionary (Gregory Prest).

Harry is sure he’s met Irene before, but she won’t admit anything at first. Only when war and bloodshed become imminent does she open up.

The action builds slowly, but once it’s humming, director Albert Schultz’s production is theatrically and emotionally strong. At first you might think you’re watching a period comedy, but even early on there are dark notes, including the whine of the nearby airport’s air raid siren and the Italian soldiers’ heel-clicking salute that presages what’s to come. The ending is positively grim.

Not all the characters are fully realized in terms of the writing or the acting, but there’s memorable work in Webster’s scientist, initially determined to do good but later caught up by nationalism and a despair with humankind Prest’s ardent radical Evan Buliung’s kind-hearted waiter, Austrian-born but now Italian, resigned to the fact that his world has been turned upside down and Jeff Lillico’s no-nonsense American, hired to improve the hotel’s fortunes.

Paolo Santalucia gives Captain Locicero, the border officer, a touch of humanity beneath his official strictness, while Lancaster brings warmth and understanding to her role as Harry’s second in command.

Matamoros never turns Achille into a melodramatic monster, no matter how cold and controlling he is, and Chameroy’s Harry is appealing, amiable and resilient, regardless of what life throws at him.

It’s Duffy, though, who keeps drawing our attention, whether spinning various yarns about her White Russian past, confronting Achille with the consequences of his business or seducing all men within sight or hearing as she slinks around in designer Lorenzo Savoini’s gowns. Hers is a masterful, rich performance, sure to be one of the year’s best.

Savoini’s responsible not only for the costumes but also the attractive wrap-around, two-story hotel set, complete with mountains in the distance. It sets us immediately in the play’s world, as do Mike Ross’s musical selections, which end on a cleverly ironic note, first with the upbeat Pennies From Heaven and then the romantic impossibility suggested by Beautiful Dreamer.