Why are male and female beach volleyball uniforms so different?

“I actually think it’s unfair for the guys where they have to be so covered,” says Team Canada's Melissa Humana-Paredes at the Pan Am Games 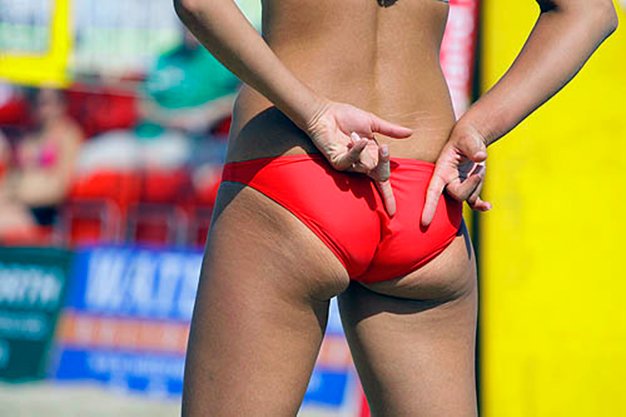 Melissa Humana-Paredes and teammate Taylor Pischke have been stars of the Pan Am Games coverage.

But the Canadian beach volleyball duo are being appreciated for more than their athletic abilities.

Like all female beach volleyball players, Humana-Paredes and Pischke play in a bikini.

Yes, the sport is beach volleyball, and the bikini is what many women wear on the beach.

At such an elite level, however, it’s hard not to notice the contrast to the uniforms of the male beach volleyball players who wear in knee-length shorts and T’s.

Beach volleyball is different from other Pan Am sports because it is marketed as a party. At the games, a DJ blasts dance music over a loud speaker. There are dancers and volunteers spraying the crowd with water guns. One CBC report noted the “game show” atmosphere at the beach volleyball court.

Some argue this detracts from the sport, and trivializes these women’s athletic ability.

“We do get comments about our uniform,” says Humana-Paredes in an interview.

She says she used to get upset at the thought of people losing respect for the sport because of the bikinis. And losing sight of how much time, devotion and sacrifice is involved in being a professional athlete simply over a bathing suit.

“But I’m not playing for other people,” she says. “I’m playing for me and for my country.”

Jackie Skender, Volleyball Canada’s communications director, says that men’s and women’s uniforms for the Games are different because “it’s just what they wear” on the beach.

She explains that many of the female volleyball players prefer the bikini for practical reasons. It allows for greater movement and doesn’t trap sand under the fabric.

Charlene Weaving, associate professor of human kinetics at St. Francis Xavier University in Nova Scotia and author of Buns of Gold, Silver and Bronze: A critical analysis of the state of Olympic women’s volleyball, says that there is something very problematic with the uniform rules and the presentation of beach volleyball at the Pan Am Games and Olympics.

She argues that if the bikini is more practical, it would make sense for men to be playing in speedos.

Weaving is concerned with the party atmosphere, and especially the cheerleaders at beach volleyball games.

“To have this at a really elite level definitely takes away from the seriousness, what great athletes they are,” says Weaving. “They’re just sexy girls playing.”

The women athletes, says Weaving, cannot escape the construct of the party environment because there is little difference in how the cheerleaders and female players are dressed at the games.

“It’s telling viewers, this is how you should consume the product,” says Weaving.

Humana-Paredes feels sorry for anyone who can’t appreciate the true beauty of the sport.

As an athlete on the court, she says she’s not focused on the blaring music.

“We’re not partying,” she says, but she is celebrating great plays with the crowd.

The FIVB, the international volleyball federation, has set guidelines and standards for dress during the games. Women are expected to wear the bikini, however in recent years changes have been made to allow shorts to be worn.

This change, Humana-Paredes says, was made to accommodate more modest cultures. The players can wear spandex leggings in temperatures under 15 degrees Celsius.

However, Weaving says that the rules currently do not bend far enough. She says the dress code would not allow for a Muslim woman, for example, to compete.

Weaving says that when the rules about wearing the bikini were first introduced, more female players were outraged, but that now, “there’s not a lot of players challenging the uniform rule.”

She says that players are reluctant to challenge the FIVB because they are concerned that it will hinder their sponsorship deals and support and exposure for their sport. Women’s sports suffer from a chronic lack of public interest and the Olympics and Pan Am Games are often an opportunity to bring attention to them.

Humana-Paredes, on the other hand, is concerned with the clothing requirements for male beach volleyball players.

“I actually think it’s unfair for the guys where they have to be so covered,” she says.

While the women are expected to play in a bikini, men are not even allowed to remove their shirts because their number and country they play for must be visible at all times. She says she has seen men playing on scorching hot days in visible discomfort.

Humana-Paredes hopes that in future concessions will be made to allow men to play shirtless.

One response to “Why are male and female beach volleyball uniforms so different?”