NOW MagazineNewsI’m looking into tinting my apartment windows with UV-reflective window film. Is the film harmful?

I’m looking into tinting my apartment windows with UV-reflective window film. Is the film harmful?

Q: I'm looking into tinting my apartment windows with UV-reflective window film. Is the film harmful? A: When the sun's baking. 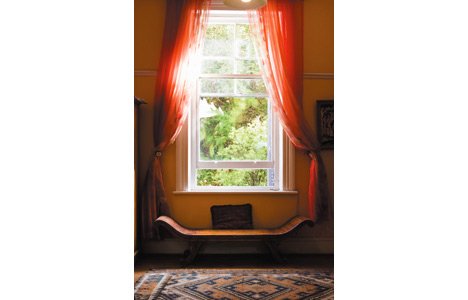 Q: I’m looking into tinting my apartment windows with UV-reflective window film. Is the film harmful?

A: When the sun’s baking your pad like a souffle in a hot oven, it can start to feel like your windows are out to cook you. When your wispy curtains will do absolutely nothing to protect you from the heat, retractable outdoor awnings are ideal for keeping solar rays from even touching your windows in the summer months.

If awnings aren’t an option, adding a cheap coating to your window suddenly seems ingenious.

UV-blocking films claim to eliminate up to 80 percent of solar heat gain, but some are designed to work better in warmer climates. They’re more tinted and reflective, and block warming rays in cold months, too. Not a good thing when we spend half the year in winter mode.

Low-E window coatings were originally created in the 1980s for cold climes, to let more visible light in and keep heat generated via furnaces, rads and fireplaces indoors.

The cool thing is that several companies now manufacture dual-purpose coatings for year-round energy savings. Energy Film, for instance, is an affordable glue-free film available at Home Depot that claims to save 12 to 18 per cent on annual energy costs (energyfilm.com).

Hell, the David Suzuki Foundation building in Vancouver added a similar film to its windows (Prestige Sun Control Window Film, by 3M) for year-round energy savings. Such films have been a huge hit with office workers in T.O., too, more so than those vinyl blinds that don’t keep glare off your computer screen and still bake you to a crisp.

Not to mention the fact that UV-reducing films protect furnishings and art from fading, increasing the longevity of your stuff.

Keep in mind that clear films block less light than tinted ones, but even clear ones reduce solar energy penetration by some 40 per cent.

But what are all these films made of? It’s true that many cheap winter-draft-blocking films are nothing but hormone-disruptor-softened PVC, but most UV-blocking and low-E films are safer polyester-based. Energy Film has a PVC layer that clings to your windowpane, while the outer layer exposed to the room is polyester.

Most quality films keep the sun out and/or winter heat in with a thin, invisible metal or ceramic layer a few nano-particles thick.

You’ve probably heard me sneer about the unfettered use of nano-silver and nano-sunscreen chems in consumer goods, and I’m still leery of the under-researched impacts of nano-particles in the environment.

But this nanotech won’t be leaching into waterways like the nano-silver embedded in socks.

The metals used in low-E films include iron, titanium, stainless steel, copper, gold, silver, chromium, aluminum and other alloys. I wouldn’t consider them toxic to have in your home. Sure, petroleum-based films may not be benign to source, but they get two thumbs-up from green building orgs because they effectively reduce a home’s energy footprint when you can’t afford new top-of-the-line windows.

In fact, I like the idea so much, I might just apply a clear film to my south-facing bedroom double hung window right now. If your landlord’s energy-wise, he or she might agree to fund your cost-cutting coating.