Here is the greatest thing about TIFF Cinematheques Mel Brooks retrospective, Its Good To Be The King: this Saturday, you. 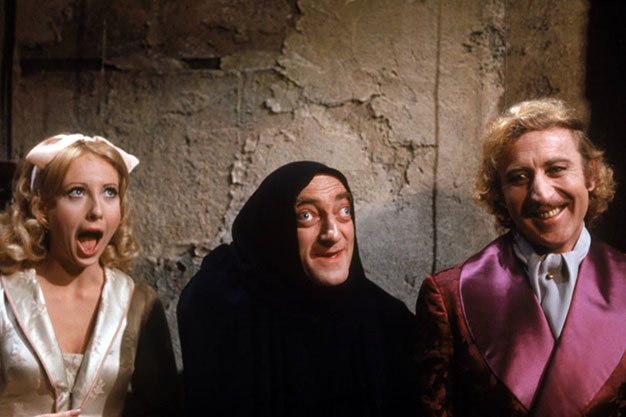 Here is the greatest thing about TIFF Cinematheques Mel Brooks retrospective, Its Good To Be The King: this Saturday, you can watch The Producers at 5 pm and Young Frankenstein at 7:30 pm, and that is a double-bill made of absolute joy.

The Producers, Brookss first film as a writer-director, is a juggernaut farce about a Broadway hustler (Zero Mostel) who ropes a meek accountant (Gene Wilder) into staging the worst play in human history in order make off with their backers money when it flops. It is the one with Springtime For Hitler in it.

Young Frankenstein is a pitch-perfect satire of classic Universal Studios monster movies starring Wilder as the uncomfortable heir to the Frankenstein legacy, which includes a large castle, a hunchbacked servant (Marty Feldman) and a tendency towards experimentation on the dead (Peter Boyle). It is the one with Puttin On The Ritz in it.

These are two of the funniest films ever made, and if you have any sense at all you will go and see them at the Lightbox, ideally with some popcorn. The rest of Brookss filmography, most of which TIFF is screening over the next few weeks, is kind of a mixed bag.

Blazing Saddles, screening Sunday at 7 pm, is still hysterically funny, though its characters open racism and sexism plays as much more squirmy than it did in 1974. (In fairness, that material is a commentary on racist and sexist attitudes, while theres no such filter to explain The Producers ugly homophobic streak.) And I have a huge soft spot for the telegraphed gags and pratfalls of Silent Movie, playing Thursday at 8:45 pm that picture finds a context in which Brookss love of Borscht Belt mugging is not only appropriate but warranted, and also proves that Marty Feldmans eyebrows were an inexhaustible source of comedic energy.

After that, though, Brookss movies started to wobble. High Anxiety (November 22, 10 pm) is a send-up of Alfred Hitchcocks movies, with Brooks shifting from genre parody to reference comedy. Oh, its funny and, as always, Harvey Korman and Madeleine Kahn are fantastically good at layering their stock characters with tics and cracked comic timing but for the first time, the jokes dont advance the story they exist in self-contained bits, just sort of happening around the skeleton of the plot.

With its clumsy melding of period costumes and quasi-ribald humour, History Of The World: Part I (November 27, 8:45 pm) feels even more like a random assemblage of gags strung together on the thinnest of premises TIFF claims Brooks is spoofing D.W. Griffiths Intolerance, which seems an awfully generous reading.

From there, it was straight down the tubes: the inexplicably beloved Spaceballs (November 29, 9 pm) is a feeble parody of Star Wars that doesnt understand the source material and arrived a good four or five years too late to matter, while Robin Hood: Men In Tights (December 13, 10 pm) and Dracula: Dead And Loving It (December 20, 9:30 pm) are just insipid. You might have enjoyed them if you saw them at a very young age, but youre older now. Trust me: theyre richer in your memories.

Id happily trade all of Brookss later work for a screening of his second feature, The Twelve Chairs, a farce about three schemers (Brooks, Ron Moody and Frank Langella) out to find a fortune in jewels hidden inside one of a dozen chairs after the Russian Revolution. But as Brookss least-known picture, with no easily marketable hook, its been consigned to obscurity a pretty decent HD transfer is included on the Mel Brooks Collection Blu-ray set 20th Century Fox released a few years back. (That package also includes the Brooks-produced remake of To Be Or Not To Be, the only time he co-starred with his wife, Anne Bancroft. Its still quite delightful.)

If youre in the mood for something slightly more serious, you might consider the latest in MDFF and Seventh Arts screening series, happening Wednesday (November 19) at Camera.

This months feature is Amat Escalantes 2005 drama Sangre, about a married couple (Cirilo Recio Davila, Laura Saldana Quintero) whose mundane life is thrown out of whack by the arrival of his daughter (Claudia Orozco) from a previous marriage. Its paired with Dustin Guy Defas charming 2014 short Person To Person, starring Bene Coopersmith and Toronto actor Deragh Campbell (I Used To Be Darker). Campbell will be present for a Q&A following the screening.

The show starts at 9 pm tickets are available starting at 8 pm. You should probably go.