Immerse yourself in new realities at TIFFs digiPlaySpace

The world premiere of an interactive light installation currently hangs from the ceiling above the lobby at the TIFF Bell. 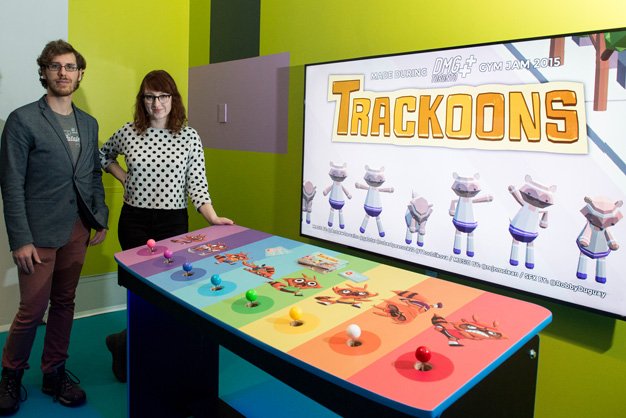 The world premiere of an interactive light installation currently hangs from the ceiling above the lobby at the TIFF Bell Lightbox. Marshmallow Clouds is one of the first displays visitors will see when entering digiPlaySpace, TIFFs digital exhibition for kids of all ages, running March 5 to April 24 (admission is $10).

The cloud-shaped sculpture is a collaboration between students in Ryerson Universitys New Media program and designers at Vancouvers Tangible Interaction, and it lights up and changes colours through motion sensory happening below.

We built that for the people of Toronto, says Nick Pagee, curator of digiPlaySpace. We want people to come and play and hang out any time.

Were seeing this explosion of media forms everywhere, Pagee adds. Weve had to stretch our brains around this whole new scope of what creative expression can be.

One of this years most exciting pieces is called Elements, an immersive, interactive installation designed by Bostons Design I/O. The display uses body movement to control four elements earth, air, fire and water on a large screen. Doing so causes colourful, primordial-looking creatures on the screen to react to the elements. Think of it as a large-scale body-controlled video game.

The way the creatures move is based on the configuration of bodies, designer Theo Watson explains. Its algorithmic. The characters are shaped by interactions.

At a media preview held earlier this week, adults tended to approach Elements with hesitation, stopping to read the displays instructions printed on a side column before testing it out. Kids, however, ran up to the display, jumping around and waving their arms, which in turn, caused immediate reactions on screen.

Pagee says that visitors under 18 typically know how to intuitively interact with digital displays and technology. And thats part of the point of digiPlaySpace.

The content itself speaks to different learning styles, so you dont have to sit down and read the instruction manual to play a video game, he says. You really should be able to come here and immediately dive into just discovering all kinds of new things.

Some of those things include the Augmented Reality Sandbox, a traditional sandbox superimposed with an elevation colour map. LOLympics, a flashy immersive experience by Torontos Catshrine art collective combines human movement and colourfully animated stop-motion.

Flippaper, which was commissioned by TIFF from two artists in France, allows players to draw their own pinball course using special markers and then play it on an arcade-style video-game console.

Theres so much discussion on STEM curriculum these days, and what were doing is bringing the arts into that, says Elizabeth Muskala, director of TIFF Kids, who oversees digiPlaySpace as well as the upcoming TIFF Kids International Film Festival. Video games are all about telling stories. Its just a different form of storytelling. We want to encourage young people to be creative and innovative and inspire them.

Near the entrance to digiPlaySpace is an area dedicated to animal-themed video games. It includes the world premieres of Digital Bird Playground from the Netherlands and Pugs Sniffin Pugs from Arizonas SpaceBeagles. Trackoons, a video game made here in Toronto, comes from a new studio called Laundry Bear Games laundry bear is the Swedish translation for raccoon.

Raccoons are very ingrained in our lives, says Gabby DaRienzo, who co-owns the studio with Andrew Carvalho. We designed this game last May as a racing game that takes place in Toronto. We were trying to figure out an animal that best fists Toronto, which is a raccoon obviously.

The multiplayer game allows up to eight people to play at a time. A colour is assigned to a raccoon on screen and a joystick allows you to move your raccoon in various directions in a race around the city. Hurdles along the way become road blocks, and the goal is to be the last raccoon standing.

Kids pick it up a lot more quickly than adults, DaRienzo says. You cant jump over hurdles so as soon as a kid hits a hurdle, he knows. But adults think, No, its a hurdle. I have to jump over it.

Trackoons premiered at an event called Bit Bazaar last year, followed by stints at the Ontario Celebration Zone during the Pan-Am Games and at the Canadian Video Game Awards in December. Its inclusion at digiPlaySpace will allow for it to be played by thousands of attendees.

Perhaps the most exhilarating addition to this years event is a virtual-reality lounge, where visitors can experience two immersive experiences using Samsung VR headsets.

TheBlueVR from LA-based virtual reality studio Wevr goes under the sea, allowing participants to swim alongside sharks and whales. Art Alive VR, meanwhile, takes you to the arctic, where seals dive off ice sheets and a Zeppelin-style airship flies above. That piece comes from Pinnguaq, Nunavuts first start-up tech company.

We scour the world looking for the best in new media experiences for young people, and this years theme is immersion, Muskala explains, adding that immersive and reactive digital experiences are where tech, play and even film is headed. With technology, were seeing an explosion in the possibilities. That to me is so magical.