In defence of the fruitcake

If you eat it before it's properly aged, it's like getting a mouthful of booze. 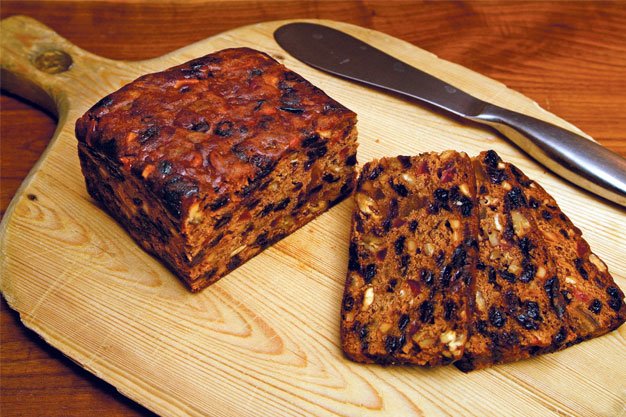 Over the holidays, we’re ready to embrace treats like gingerbread, sugar cookies and venti peppermint half-fat extra foam mocha lattes. Fruitcake, however, remains the punchline of jokes and the booby prize of secret Santas, thanks to bad recipes and cheap imitations.

It doesn’t have to be. All the Best Fine Foods uses founder Jane Rodmell’s grandma’s recipe, which dates back to the Victorian era. Last year the shop sold 500 kilos of fruitcake, so they’re making just a little more than that this year.

Here’s the key to a real fruitcake that tastes delicious.

The shop starts making fruitcakes in July, when dried fruit like raisins, pineapple, currants, cherries and orange, lemon and citron peels are soaked in brandy for two weeks.

“You pick the best dried fruit you can get. There are a lot of bad fruitcakes out there with fake ingredients and not enough fruit. Bad fruitcakes have those green cherries. I’d run the other way if I see them,” says co-owner Susan Merry.

“There also has to be enough booze.”

In August, after the fruit is fully soaked, it’s added to a basic cake batter (flour, eggs, sugar, butter, baking soda) with almonds and spices, and baked.

“You want a dark colour, a very dense and moist texture and a heavy weight – that’s where the doorstop jokes come from,” says Merry. “There should be more fruit and nuts than cake in there. The purpose of the cake is to just to hold the fruit and nuts together.”

The cake, wrapped in cheesecloth that’s been soaked in more brandy, is left to sit until November, when 3-kg slabs of cake are cut and individually wrapped for sale.

“During this time the flavours mellow and the alcohol from the cheesecloth seeps through,” says executive chef Nicole Rumball. “If you eat it before it’s properly aged, it’s like getting a mouthful of booze.”

A proper fruitcake doesn’t require refrigeration since it’s essentially dried fruit and alcohol, and can be eaten a year later with no hesitation. In fact, the shop might take a few unsold fruitcakes and wrap them in boozed cheesecloth for next year.

“I can’t tell you how many times I’ve walked around the store with a tray of samples and people just look at it and say it’s gross,” says Merry.

“But a lot of them have only had cheap ones so they get a bad impression. Once they try ours, they love it.”

A proper fruitcake should taste like a chewy fruit-and-nut bar with a hint of alcohol. It shouldn’t be light, and it should have a rich and almost buttery flavour. It should be so heavy, according to Merry, that you make thin slices and then divide them into thirds.

All the Best Fine Foods Fruitcake