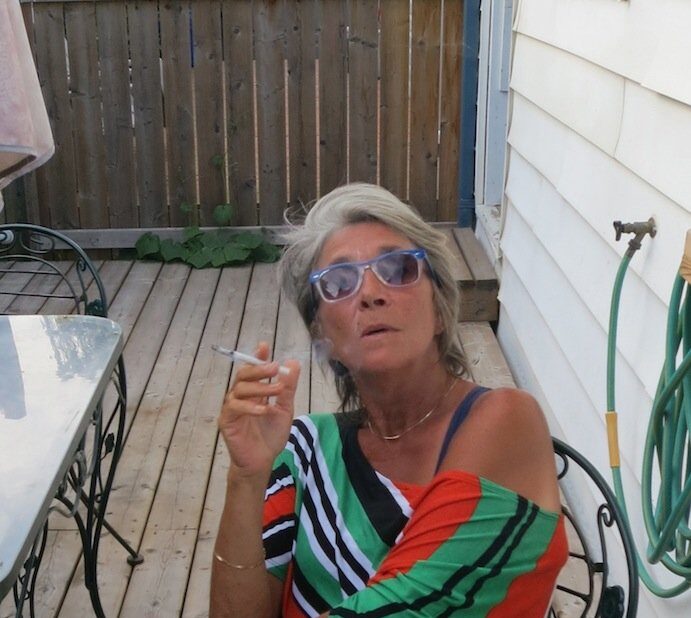 I cannot tell you how surreal it is to have just written that sentence.

As everyone who knew Iris will tell you, she was a force of fucking nature. A word that Brad Fraser used on social media today was “warrior” – and yes, a warrior woman, a theatre warrior, a goddamn theatre Goddess in fact.

First was her son Merrick, but second place of importance in her life was the theatre.

If we ever had doubts about “Why theatre?” or “Who cares about theatre?” or “Is theatre dead?” we just needed a moment in her presence and we fragile people of the theatre were convinced again that we were part of something vital and essential and deeply important.

I met Iris in the 90s in her days as dramaturge at Canadian Stage. We weren’t close but I knew her.  She was very involved with Brad and Ronnie Burkett and Tomson Highway. I knew those guys so I knew Iris. I’d see her at openings and once I went in for a meeting with her about a play of mine but I was a bit too full of myself  (or hungover) to hear her notes, and so we never worked together then.

It wasn’t until nine years ago when I was Playwright in Residence at the Banff Playwrights Colony and she was there working with Robert Chafe that we really connected. We had both been in Banff a few days, and one afternoon she approached me in the dining hall.

“I’ve been watching you,” she said. “What happened?”

“Why aren’t you an asshole anymore?”

I explained to her that I’d gotten sober. After that a new kind of friendship developed between us as we began to trudge a path together.

Iris worked on most of my plays after then – unless she didn’t connect with one, and if she didn’t, she had no trouble bluntly saying it wasn’t for her. And even then you felt her complicated love.

I remember a day I went into her garden apartment on Ontario Street and sat at her long blue table, feeling sorry for myself for some difficult rehearsal or bad review, and she said in this loving maternal voice, “Would you like a cup of tea?” and I said, “Sure, do you have peppermint?” and without a moment to shift, she became a Medusa, hissing “It’s not a fucking restaurant!”

That was our beautiful, complicated Iris.

In July, Iris was taking her yearly holiday where she would spend some time with her dear friend Bonnie Green and her cousin and friend Paul Shaw in Stratford, and afterward take a few weeks in her beloved Port Stanley where she would walk on the beach in the mornings with her dog Honeybee, and play poker with “the old ladies” in the afternoons.

But something went wrong and she began to lose weight. She came back to Toronto early and went through a battery of tests, and cancer was discovered. The news was not good. She didn’t want to tell many people, she certainly didn’t want it public, she never liked any kind of show made over her, she could not bear to be the centre of attention in that way.

When I visited her during the film festival she told me she thought she’d be around for another couple of months. And when Iris told you something you believed it. Iris said it, so it must be true.

None of us expected it to happen so quickly.  Last night she was working with Matt MacKenzie on his new play. Matt had flown in from Calgary to stay with Iris while they worked together. This morning she woke up at five and asked Matt to wipe her face and her hands with a wet facecloth. Matt told me that when he did that she complained about the temperature. When Matt got the temperature right she fell asleep “like a baby.” And that was that.

And tonight I think of our motley crew: Brad and Ronnie and Tomson and Matt and Robert Chafe and John Alcorn and Anusree Roy and Judith Thompson and David Yee and Charlotte Corbeil-Coleman and Colleen Murphy and Nina Lee Aquino, all of us gathered under the flag of our Pirate Queen, and I feel all of our sadness, all of our loss, our loneliness.

I spoke with Iris on the phone on Tuesday. She had begun to have trouble breathing. She called but couldn’t catch her breath to talk.

She said, “Tell me a story while I breathe.”