Old homophobia is rising again in the United States 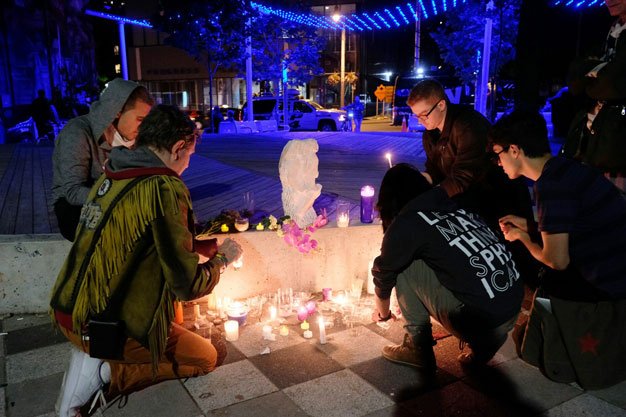 A candlelight vigil in Toronto for the victims of the Orlando massacre.

We’re driving through rural Indiana to the Indianapolis airport on a hot afternoon. Enormous American flags droop at half-mast. When I ask the driver why, he doesn’t know but says it’s customarily done for “uniformed officers” when they’re killed on the job. I wonder silently, “Do they do that for Black kids shot by the uniformed officers?”

Then I spot a huge sign over a roadside store: GUNS GUNS GUNS. And another. And another. The driver, who is African American, says, “Yeah, folks come to Indiana to get their guns. They can even get weapons of mass destruction here.” We talk all the way to the airport. He says the KKK is active in these parts, too.

Two days later, the mass shooting of 49 men and women at a Latino LGBT club in Orlando, Florida, is all over the news.

I was visiting Indiana for a screening of my film This Is Gay Propaganda: LGBT Rights & The War In Ukraine. It’s about the effects of Russia’s (so-called) Gay Propaganda Law, which criminalizes homosexuality and has forced LGBT folk to flee the Russian-occupied regions of Ukraine. Human Rights Watch has documented the fact that death threats, raids and even the torture of LGBT people are routine in Russia and the regions it dominates.

Turns out this shit is happening all over the world. Russia. Lithuania. Nigeria – and Indiana, where activists have been fighting similar laws since the early 90s.

In the U.S. alone, more than 200 anti-gay laws under the guise of freedom of religion have been passed in the past six months. In 2015 alone, 115 such laws were passed.

The first such legislation, signed into federal law by president Bill Clinton in 1993, allows businesses and institutions to deny services to LGBTQ people on the basis of religious conviction.

In Indiana, the LGBTQ community fought hard against that state’s Religious Freedom Restoration Act, and the bill was softened, but not much. Housing and employment discrimination based on sexual orientation or gender identity are legal in most states with such laws.

Other state’s RFRAs restrict access to bathrooms for transgendered people or weaken the ways in which state governments can protect LGBTQ residents and visitors. This is all part of the backlash against the Supreme Court’s striking down of the Defense Of Marriage Act – opening the way for the legalization of same-sex marriage – which has become darkly popular across the country.

Florida, in particular, has a long history of anti-gay discrimination. Remember Anita Bryant? In the 1970s, the orange juice advert star led a campaign called Save Our Children that resulted in a Florida law prohibiting same-sex adoption.

While that legislation has since been repealed, gender identity and sexual orientation are not protected under Florida state law. The state passed its Religious Freedom Restoration Act in 1998.

In 2015, legislators proposed an amendment that would have allowed doctors to turn away HIV-positive patients and refuse to provide women with birth control. The amendment would also have made it legal for adoption agencies to turn away prospective gay parents. Mark Joseph Stern, who covers LGBTQ issues for Slate, described it as a “plainly malicious, proudly discriminatory, profoundly malefic measure.”

Only relentless lobbying by Florida Equality Action (FEA) prevented passage of the amendment. But the group continues to fight for LGBT rights in housing and employment.

FEA member Carlos Guillermo Smith of Orlando says anti-gay views continue to get plenty of airtime. “This horrific tragedy has demonstrated that bigotry is alive and well in the state of Florida.”

My own research has shown that where there is anti-gay legislation, LGBTQ hate crimes escalate.

In Ukraine, for example, “corrective rape” – the raping of masculine-looking women by men to supposedly “correct” them – has become common.

What happened in Orlando could happen in Mississippi or in South Carolina. Smaller LGBT bar raids and shootings have happened all over Russia and Ukraine.

As LGBTQ activist Olena Shevchenko, whom I interviewed for my film, points out, Russia’s gay propaganda law is not just a Russian trend. It’s happening all over the world.

Powerful, well-funded American evangelical groups like the Abiding Truth Ministries, the World Congress of Families and the Family Research Council have been active in Africa, the Caribbean, South America and eastern Europe for many years, helping to craft anti-gay laws around the world. Now they’re finding a niche in U.S. state law, contributing to what the Huffington Post calls “a globalization of homophobia.”

While there is no definitive proof that the carnage at Pulse was an ISIS attack, there is one thing we can be sure of. This mass shooting occurred in the context of a terrifying wave of religious extremism.

Fly all your flags at half-mast, America. You can’t outsource this shooting. This one is on you.

Marusya Bociurkiw is a filmmaker and associate professor of media theory and director of the Studio for Media Activism and Critical Thought at Ryerson University.