Celebrating the incredible graphic novels and comics made by indigenous peoples 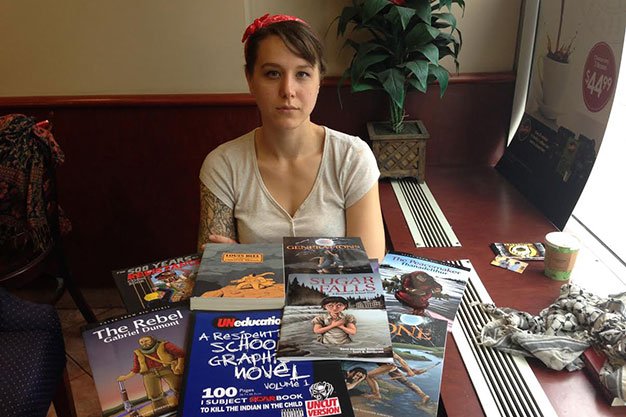 April marks Indigenous Comix Month, and to celebrate Ad Astra‘s Nicole Burton has compiled comics written and drawn by first nations artists from across the country.

From residential schools and Louis Riel to miners and seal hunts, the stories are dark, graphic, sometimes sexually explicit. She’s also compiled reviews of works and feature interviews with indigenous creators, and released an original webcomic called DOGS, which is based off the Qikiqtani Truth Commission — which documented the life of Inuit from 1950 to 1975.

As the curator, Burton wants the work, and the artists, to set the tone and speak for itself.

“It’s not just about comic book histories of colonization, it’s about whatever indigenous creators want to talk about,” says Burton, a lifelong comics fan who founded Ad Astra in 2011. “We will all be amazed at how much there is to be said.”

Burton founded Ad Astra Comix to curate political comics and provide outlets for education and debate. They host pop-up shops and tables at local events, including the Toronto Comic Arts Festival, coming in May.

As Ad Astra gained more publishing opportunities, Burton wanted to place more focus on diversity, and in 2014, had been working with Blackfoot artist Jason Eaglespeaker on how to best promote his graphic novel Uneducation: a Residential Schools Graphic Novel.

Word of mouth has proven effective, and more artists have come forward to present their stories, representing various First Nations groups and stories.

“Most of the stories are coupled with stories of perseverance, of survival,” says Burton, describing the comics. “And the creators themselves are a testament to cultural survival.”

The creators include David Robertson, a Cree artist who has written and drawn several comics, including Sugar Falls: A Residential School Story, and The Helen Betty Osborne Story, a non-fiction tale about the abduction of a Cree woman in La Pas, Manitoba in 1971. Elizabeth LaPensée, an Anishinaabe/Métis/Irish graphic artist,m is also featured she creates video games and board games based on traditional indigenous knowledge and history.