In the first debate of the federal election, party leaders couldn't agree who among them had ruined / is ruining / would ruin Canada the worst. 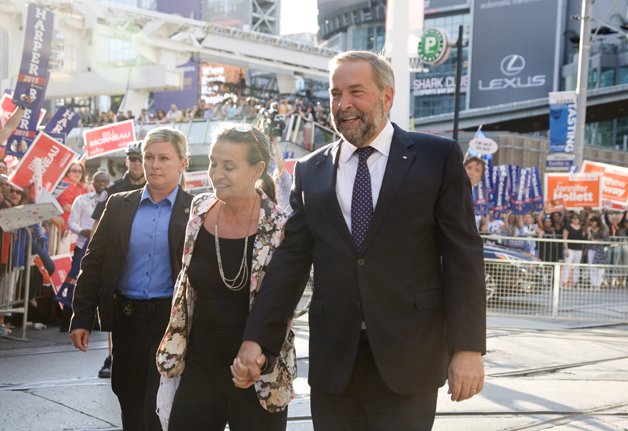 If you were to ask a reasonably informed American what they’d imagine a Canadian election debate to be like, they would probably describe something polite, heavily substantive, largely unremarkable — yet oddly satisfying — and very, very white.

In other words, they would not be too far off from the Thursday-night event hosted by Maclean’s at the Dundas-and-Victoria studios occupied by its Rogers Media broadcast brethren. Moderated by editor/columnist Paul Wells, the four national party leaders (the Conservatives’ Stephen Harper, NDP’s Thomas Mulcair, Liberals’ Justin Trudeau, and Greens’ Elizabeth May) faced off in segments concerning the economy, democratic reform, energy and the environment, and national security and foreign policy.

There was rather more naked contempt than our hypothetical American might have guessed, but it was otherwise a solid engagement on the issues.

Mulcair: You know, Stephen Harper is the only prime minister in Canadian history who, when asked about the recession during his mandate, gets to say, “Which one?”

Wells: Mr. Harper, you used to promise that you wouldn’t name senators if they hadn’t been elected. Now you’re promising you won’t name senators at all. You blame the courts for blocking reform, and you’ve asked the provinces to come up with ideas for reform. But the courts and the provinces didn’t name the senators who are in trouble, you did. Do you owe Canadians an apology for putting Mike Duffy, Pamela Wallin, and Patrick Brazeau in the Senate?

Harper: Well, first of all, I certainly did not name all of the senators that are in trouble.…

Trudeau: If we are going to send our troops overseas, we need to make sure we are properly taking care of them when they come home. And Mr. Harper has failed our veterans by nickel and diming them, by not giving them the service, the help that they need, and it’s something that we should all be ashamed of — that this government that likes to wrap itself in the flag is actually not caring for those people who have fought, injured themselves, and in many cases died under that flag. 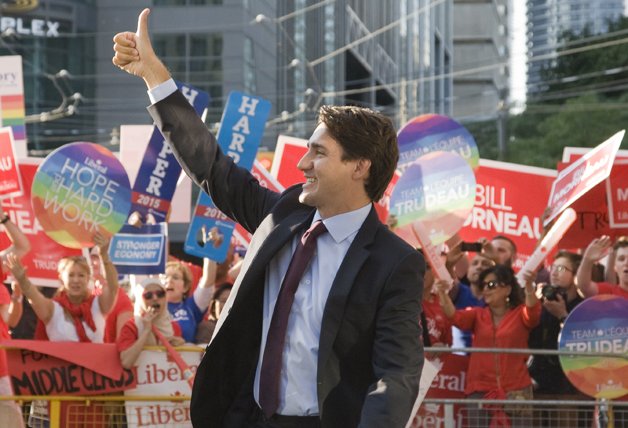 Mulcair: Mr. Harper, you’re trying to deny the fact that for the past five months, those same statistics from the Canadian government have shown that for five months in a row, the Canadian economy has shrunk. We are one month away from a technical definition of recession, but according to a lot of observers, we’re already in a recession.

May, to Harper: And with all due respect, your “foothold in Asia” [that you just took credit for] was to sell us down the river on national sovereignty. You’ve bound this country without a single set of hearings in parliament to a trade — not a trade deal, an investment treaty with China that binds us until the year 2045, and we can’t get out of it. We need to insist on transparency, because Beijing’s going to be looking over the shoulder of the next prime minister and telling us what laws we’re allowed to pass.

Harper, on a move toward proportional representation: I have not found Canadians who want to make this fundamental change. 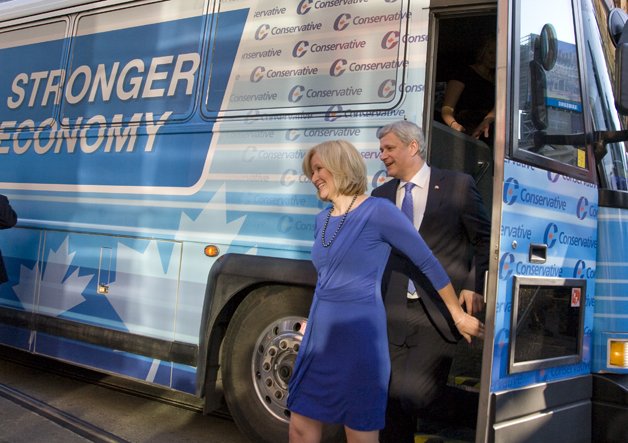 Harper, on meeting emissions targets:  Look, we’re gonna have to obviously do more regulation, we’re committed to doing that, we’ve announced some sectors, but there will also have to be technological transformation. Well, that’s why we’re investing over a billion dollars a year in energy technology projects. And that’s what has to happen.

Wells: I covered the 2008 campaign. Your minister at the time was promising regulations for the oil and gas sectors. When are they coming?

Best really, that’s what you think of people who believe corporations aren’t paying their fair share?

Trudeau, on Mulcair: His plan to hike corporate taxes is simply pandering to the people who like to hate corporations.

Best sure, it isn’t

May: When I refer to the government as an “elected dictatorship,” it’s not personal in any way to the prime minister nor to his party. 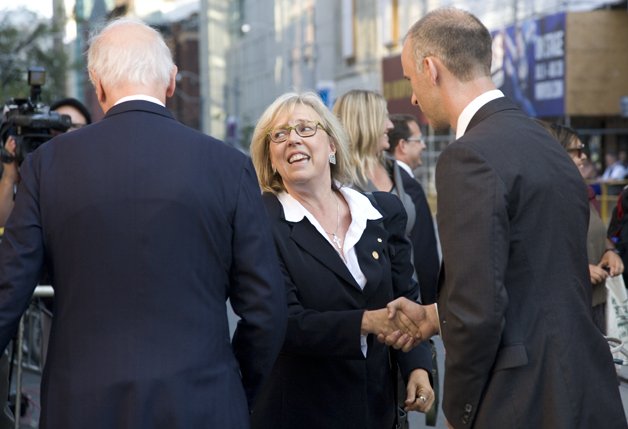 Best the oil sands are good. And bad! Good and bad!

Trudeau: And the reason the environmental groups in Canada and across the United States are so concerned about Canadian oil is because Mr. Harper has turned the oil sands into the scapegoat around the world for climate change. He has put a big target on our oil sands, which are going to be an important part of our economy for a number of years to come, although we do have to get beyond them. And his lack of leadership on the environment is hurting Canadian jobs and Canadian relations with other countries.

Mulcair, on combating terrorism: …the Conservatives left completely silent the question of domestic radicalization. And the problem is of course some of the code words used by the Conservatives have been very worrisome. For example, President Obama will talk about working with houses of worship and religious leaders. Mr. Harper points out and singles out mosques. He knows why he’s using that language. He has a backbencher who said that Muslim women should get the hell back where they came from, and he’s about to sign that person’s nomination papers. I find that reprehensible and beneath the dignity of a Canadian prime minister.

Wells: Mr. Harper, are you using code words against Muslims?

Harper: Absolutely not. … I believe it is important that we call the international jihadist threat exactly what it is, and anyone who thinks that is somehow labelling Islam — Muslims are the vast majority of victims of this movement. Muslim minorities are a particular focus of our international efforts to make sure we protect people. Not just in this country, but around the world. If you’re not prepared to call the threat we face by the name it is, you are not prepared to confront it, and we need to confront it as a country. 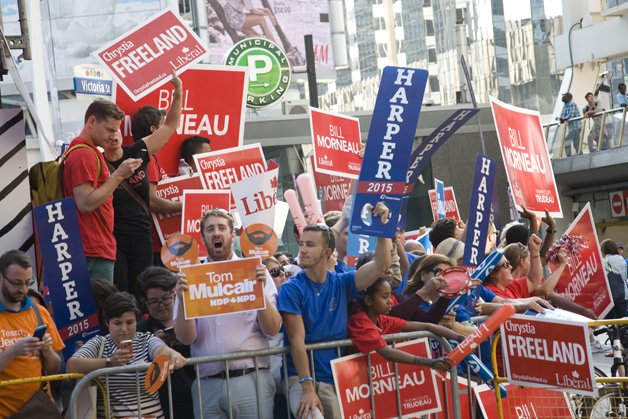 May, in her closing remarks, after noting this might the only debate between all four leaders: I want to say that it will be a shame if we don’t have more debates, because as comprehensive as the questions were, we have not discussed social policy, we have not discussed how we respond to the Truth and Reconciliation Commission, we’ve not discussed how we must expand our medicare system to include pharmacare, what we should do for young people who are facing crushing levels of student debts and their families. We have a lot of issues to discuss. Inequality — everyone’s talking about the middle class, and I support the concern. But the 86 wealthiest families in this country have the same combined wealth as the 11.4 million Canadians at the bottom — one third of Canadians have the combined wealth of the top 86 families. We have to address this.

Mulcair, in his closing statement: It is time for change. Change that’s built on hard work, living within your means, and accountability. These are the values that have guided my 35 years of public service, and these are the values that will continue to guide me. My number-one priority is to kick-start the economy and get Canadians working.

Global News’ Peter Kim, in the post-debate media availability with Trudeau: One quick question: Your closing remarks were, they were… kind of horrible. Like, what message were you trying to communicate with those closing remarks? They were markedly different from everyone else’s.

Trudeau: Well, what I was communicating was the connection that I’ve been blessed to have with Canadians all my life [and so on.…]