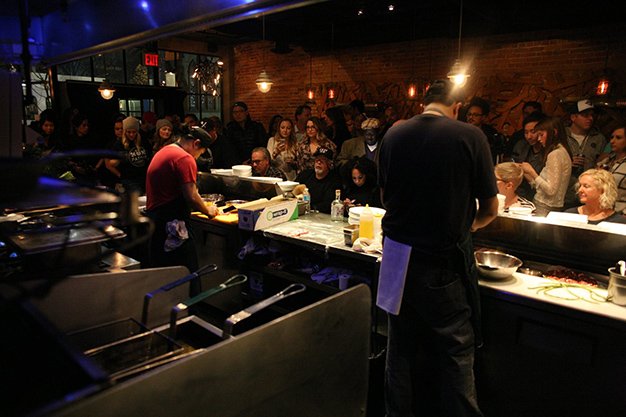 Like many others of my generation, I at least partially owe my love of cooking, and knowledge of obscure ingredients, to the Japanese television camp-fest that was Iron Chef. (Do you also secretly want to pick up every yellow pepper you see, bite into it and smile enigmatically?)

Nowadays, ultra-dramatic, stare-filled cookoffs form the backbone of every popular cooking show – but, as it turns out, they also make for a killer local food event (particularly when everyone in the room is drinking).

The Underground Chef Battles, held every month or so, see two Toronto chefs go head to head in front of an open kitchen, a panel of judges and a room full of supporters. The whole thing is co-run by chef Joe Friday (when he’s not heading up the kitchen at Via Vai – or showing up on the cover of NOW) and chef (and Food Dude) Devan Rajkumar, who’s currently part of the crew at Omaw.

The latest in the series featured Danai Hongwanishkul, the chef de cuisine at Patois, and Guillermo Hebertson, who until very, very recently was heading the kitchen at Barsa Taberna. Among the judges: singer Melanie Durrant, Montreal chef battle organizer Sean Lariviere, famed Canadian chef Ted Reader, and – of course – yours truly.

The series has been running since February, though I’d never attended until Monday night’s battle at Origin. I found a room quaking slightly from the music and rammed with chefs, industry folks and their buds (including Craig Wong of Patois, another chef featured in our Holiday Food & Drink Special, who showed up to root for his CDC).

The evening kicked off, as I’m assuming lots of chef parties do, with two cooks being pulled from the audience for an impromptu chicken-sectioning contest, before the battle got underway in earnest. True to classic Iron Chef form, there were two secret ingredients: chicken livers and long green beans. Five minutes after we shouted a countdown and the battle started, Friday popped up with another one: a bottle of tequila (which my fellow judges and I promptly bogarted).

As the clock ran down, the crowd duly cheered each time a chef set a pan ablaze or flattened a chicken breast into submission with a saucepan. Finally, Hebertson and Hongwanishkul slid their first dishes over the pass: a silky chicken-liver mousse topped with a confettilike pickle of fruits and veggies (including the necessary long beans) and a miso-potato soup topped with cornmeal-crusted liver, respectively.

It was at this point that I was first able to enjoy the experience of random people tapping me on the shoulder, asking me if they could take a photo of my food. (It’s nice being that envied, you know?)

For the main, both chefs followed a surprisingly similar path, using the segmented chickens from earlier in the evening. Hebertson smoked his, placed it on a tequila-jicama slaw, and topped it with a tomatillo-chicken-liver sauce, while Hongwanishkul crafted a chicken roulade and sat it atop a salad of blackberries and romanesco.

I won’t say what went on in the judges’ chamber after we were done sampling (though I was stumping hard for Hebertson to get recognized for that mousse), but in the end, Hongwanishkul’s risk-taking earned him the title. (His prize: more tequila.)

If I’m being completely honest, though, the real winner at that event was me.