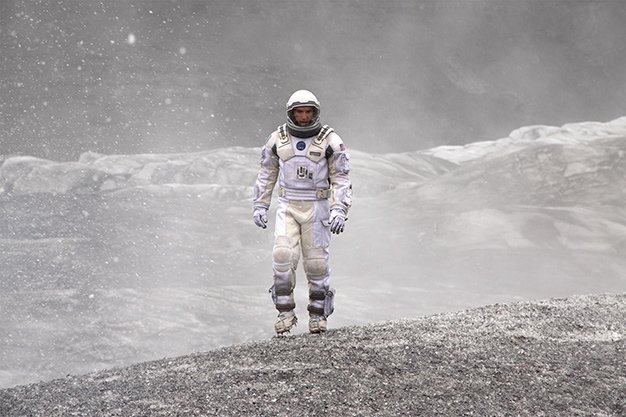 Interstellar is a gargantuan, high-concept world-beater kind of movie with sweeping God’s-eye-view images, the pace of a marathon runner and a thrumming Hans Zimmer score made up of one crescendo after another. Christopher Nolan’s pictures – even his Batman movies – have a self-importance that makes you believe the fate of the human race is at stake, and this time it actually is.

It’s a few decades from now, and Earth is dying. America has turned most of its resources to farming, but a blight is consuming our crops and slowly eating up our oxygen.

When astronaut-turned-corn-farmer Cooper (Matthew McConaughey) and his young daughter (Mackenzie Foy) follow a mysterious signal to a secret NASA base, they discover a project designed to find humanity a new home – at the other end of a stable wormhole located somewhere near Saturn.

Getting to the wormhole is just the first movement of Interstellar, which slowly sheds its hard-SF trappings for a goopy reliance on primal concepts like destiny and the power of love. (The effects remain spectacular, especially in the IMAX version – which is being shown on actual film at the Scotiabank, and worth every penny of the ticket price.)

McConaughey and his co-stars do a terrific job of underplaying the tech-nobabble and selling their individual moments (once again, Jessica Chastain is a phenomenon), and Nolan’s trademark big-picture confidence propels Interstellar through its near-three-hour running time with breathless style.

But when it’s time to send the movie beyond the infinite, McConaughey’s crops aren’t the only corn being thrown around. Nolan’s script,  co-written as always with brother Jonathan, goes for the highest of high concepts, and it’s one that’s pretty dopey if you think about it even for a microsecond.