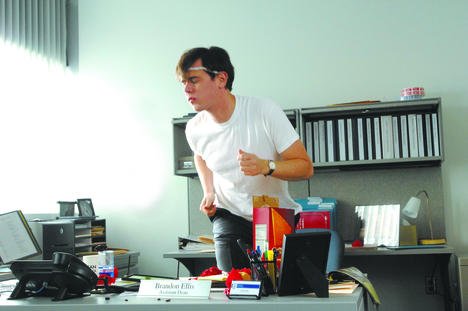 Not too long ago, Colin Hanks starred in Orange County as a high school graduate desperately trying to finagle his way into college with the help of a perpetually stoned buddy.

Just a decade later, he’s co-starring in High School, in which a kid on the verge of graduation hatches a plan to dose his entire school (via pot brownies) to invalidate the results of a drug test.

This time around, Hanks is playing an authority figure – an assistant principal who watches bemusedly as his institution falls apart over the course of one long, goofy day.

Over the phone from Los Angeles, Hanks – best known as Peggy’s concerned priest on Mad Men and the Doomsday Killer on Dexter – talked about being comfortable working in ensembles, the comic stylings of Michael Chiklis and the appeal of throwing the odd curve ball.

You seem to seek out a lot of ensemble projects. With the exception of your arc on Dexter, you’re always surrounded by a big cast.

I started out doing plays and stuff it’s the company, you know? Almost every play I did early on – and I’m not even talking professional I’m talking about high school, middle school, college – was always ensemble stuff. When I was starting out, I was number seven on the call sheet, so I was very used to that sort of supporting role. I always want to try and work with fun, great people, and it’s kind of lonely when it’s just one other guy [laughs].

High School pairs you up with Michael Chiklis for a few scenes in a weird double act.

I remember telling Chiklis when we finished High School, “Look, I don’t know what the rest of the movie is like, but the one we’re making is hilarious.”

Is it weird to find yourself playing an authority figure in a movie like this?

[laughing] You know, it wasn’t too long ago I was auditioning for the valedictorian-type guy that Matt Bush ended up playing. I said, “Wow, times have changed, cuz now I’m an assistant principal.” At least I have principal to look forward to, you know? I can move up the ranks.

Can you tell me who Chiklis is channelling as the stuffy principal? I would have guessed Dean Wormer from Animal House, but then he throws some other stuff in there.

Chiklis will take the secret to the grave. It’s an amalgamation of people – that much I do know. He did tell me one of them, but I’ve been sworn to secrecy.

And the bigger he goes, the drier your character becomes.

I made a decision early on. I told [director John] Stalberg, “There are so many of those bigger characters in the movie, maybe you need a bit of a grounding force.” I would love to have done a sort of broader character, but once I started seeing what Chiklis was doing, I said, “Well, someone’s gotta react to this. Someone’s gotta be the straight man.” You know, everybody’s got a role, and you’ve got to support the story. I just said, “My job here is to let Chiklis go hog wild with this.” And I had a front-row seat.

You’re often cast in friendly, unassuming roles, but your character on Dexter was atypical. Was there some perverse appeal to upending your image?

Colin Hanks on how director John Stalberg sold him on High School:

Hanks on performing in the live show The Thrilling Adventure Hour:

Hanks on the status of his Tower Records documentary: