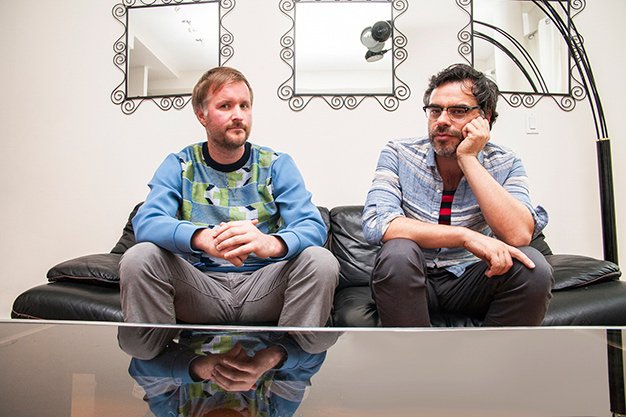 WHAT WE DO IN THE SHADOWS written and directed by Jemaine Clement and Taika Waititi with Clement, Waititi, Jonathan Brugh and Stuart Rutherford. A VSC release. 85 minutes. Opens Friday (February 13). For venues and times, see Movies.

As an actor, a filmmaker and a member of Flight of the Conchords, Jemaine Clement is used to doing press. His friend Stu Rutherford, an IT guy from New Zealand, is less seasoned, spending most of the interview sipping water and stealing glances at a tray of pastries.

They’ve come to TIFF to premiere What We Do In The Shadows, a mockumentary about vampire flatmates and their awkward interactions with the human world. Clement co-wrote, co-directed and co-stars in the movie with Taika Waititi, who worked with him on a few episodes of the Conchords’ HBO series and directed him in the romantic comedy Eagle Vs Shark. Rutherford is a mutual friend who plays a supporting character, a human who sort of drifts into the vampire world.

“Stu just happened to be around one night,” Clement explains. “We asked him to help out, pretty much like the character in the film. He’s very helpful. You know, carry stuff for us, make sure we didn’t bump into people when we were walking through town with our cameras and stuff. And then we asked him, ‘Why don’t you get in the scene, and we’ll make you the friend of one of the vampires?'”

Was it difficult for a non-actor to step into a largely improvised comedy and keep a straight face? Rutherford shrugs it off.

“I’m friends with Taika and Jemaine and other people in the cast,” Rutherford explains. “So….”

“So he’s bored of us,” Clement interrupts, and they laugh.

“I’ve heard it all before,” Rutherford says. “I’m kinda used to hanging out with them and hearing incredibly funny stuff, so it was a case of going, ‘I’ll just take that to the next level’ – just having a bit of a mask, not listening, because my character, even if stuff was said off him, wouldn’t [react].”

Clement says the long improv sessions were essential to getting the tone of the comedy right.

“We would just have the cameras going most of the time,” Clement says. “We had it set up so you could wander around and film everywhere, so if the characters decided to get up and go into that room you wouldn’t have to stop and light it. Sometimes we’d go for an hour. The cameramen would get so sore from standing there.”

Clement on the possibility of a sequel.

Clement (and Stu Rutherford!) on how vampire mythology is the gift that keeps on giving.