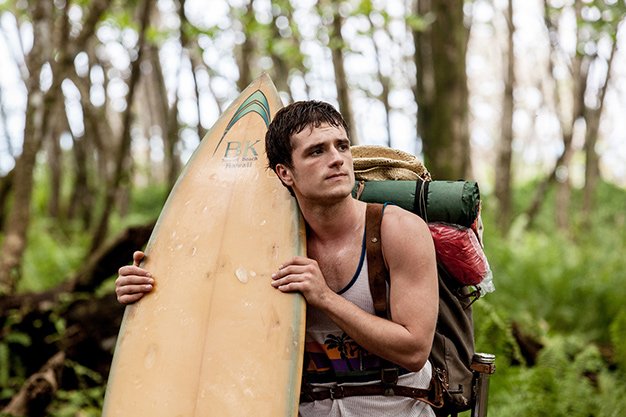 Josh Hutcherson will give you tips on kissing, but he’ll probably be grinding his teeth throughout the lesson. The 22-year-old Hunger Games star, who you may only know as Peeta, is already a veteran at soldiering through inquisitions about kissing, sexting and everything else that would accompany his photo in Seventeen and its ilk.

“Honestly, all those magazines where they ask you who is your celebrity crush, or what’s the best way to kiss someone – I’m just like, ‘It’s not my field of expertise,'” Hutcherson says, laughing off the silly headline-making answers he can’t avoid giving.

“The hardest thing about those interviews is they talk about things I just don’t care about. You feel like you have to fake an interest, and then all of a sudden you’re not being yourself. But if I were being myself, I would be like, ‘I don’t want to answer that.’ And then I’d be like an asshole. So it’s awkward.”

I refrain from questions about kissing J-Law while Hutcherson leans forward with concentration and regularly smiles, which is nice since his resting face looks like a sulk. We’re in a hotel room overlooking the downtown skyline during the Toronto Film Festival, discussing Hutcherson’s latest effort outside the long Hunger Games shadow.

In the crime thriller Escobar: Paradise Lost, Hutcherson plays Nick, a fictional Canadian surfer taken under the wing of the titular real-world drug lord. Nick was originally written to be Irish, but the actor wasn’t up for tackling such a challenging accent, so he made the decision to be a Canuck.

“We wanted him to be very genuine and not American,” Hutcherson recalls. “Americans come with the baggage of overconfidence – not that Canadians aren’t confident.”

Following its premiere, the cast had to defend the film against accusations that it romanticizes Escobar, who’s played charismatically by Benicio Del Toro before the facade is peeled away to reveal the kingpin’s monstrous nature.

“The thing that was scary about Escobar was that he wasn’t obviously menacing,” Hutcherson says. “He seemed like a family guy and did many good things for the poor community. Honestly, up until this movie, I didn’t know all the horrendous things he did. I had this idea of him as a Robin Hood. As I did more research, I saw all the horrific things.”

I would argue Paradise Lost runs against the romantic view of Escobar that’s been propped up in pop culture, particularly in rap. Hutcherson recalls Nas’s alias Nas Escobar, one of many examples that makes the Scarface model something to worship. While a fan of hip-hop, Hutcherson was never drawn to that aspect of rap culture. Instead, he’s more of A Tribe Called Quest head, with a little Lil’ Wayne and Jay Z on the side.

“I was a huge Drake fan when he first came out,” says Hutcherson. “I think he’s really great. The fact that he started as an actor and he’s Canadian, you know, is a cool thing.”

Hutcherson on how consuming The Hunger Games have been.

Hutcherson on why he got involved with Escobar.