Michael Hanrahan enjoys his Soulpepper family – offstage and on 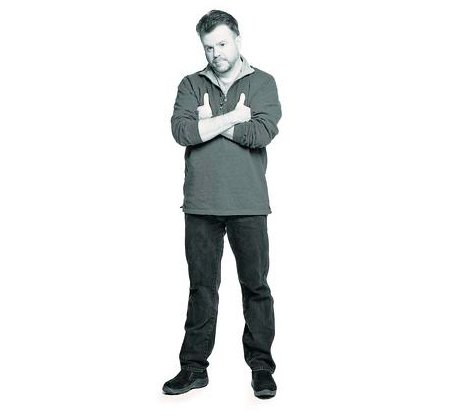 Home may not always be where the heart is, but it’s the place to which, in some fashion, we inevitably return.

David Storey’s play of the same name looks at five characters whose chit-chat on a sunny terrace at first seems mundane. Over the course of the show, though, their exchanges and occasional comic confrontations reveal secrets and unacknowledged truths.

It’s the kind of nuanced play that the Soulpepper acting ensemble revives with skill. Like previous Soulpepper productions – such as Betrayal, Translations and Loot – Home is a former success (from the 70s) that’s rarely performed these days.

“I’m having such fun doing this, working with Oliver Dennis,” smiles Michael Hanrahan, one of Soulpepper’s founding members. “Playing Harry to his Jack, I find instant comfort in being onstage with someone I’ve known for decades.”

The fastidious, detail-oriented Harry and somewhat flashier Jack are the first two figures we meet.

“The two are proper English gents looking for a connection with each other,” offers Hanrahan, who performs in five Soulpepper productions this year. “Coming from a similar background, they share many of the same attitudes, whether they’re talking about the previous war, the state of today’s youth or those who aren’t quite their kind.

“Like so many others,” he says, switching to an upper-class, slightly condescending British accent, “we’re trying to establish our superiority and don’t want much to do with those who aren’t like us, who aren’t quite the way people should be.”

Hanrahan’s talking in part about the women in the story, Kathleen and Marjorie, “who are as archetypal as the men but from another social stratum. You know immediately that you’re in the world of English society, where class can be such a divide between people.”

That difference doesn’t stop the four from pairing up in various couples during the play’s action.

“It’s the women who are better at communicating and dealing with the really important things, even though they focus on mundane topics like shoes. In contrast, the men talk in circles around the important things. When they approach something of consequence, they mutually decide not to go there.”

Storey’s dialogue of non-sequiturs, brief lines and pauses suggests Beckett. Hanrahan also sees the parallel in “that search for meaning in life, a meaning that never shows up.

“But unlike Godot, where viewers know from the start they’re in a different world, Home seems set in the most ordinary of places. It’s only partway in that I see some puzzled looks on faces in the audience as they realize they’re watching a left-of-centre kind of play.”

Despite the characters’ richness and the narrative’s human comedy, the actor admits that memorizing the non-linear text can be hard.

But the ease of working with people he’s known for more than two decades is a great help. Moving to Canada from Chicago, Hanrahan met most of the other Soulpepper founders when they worked together in the 1987 Stratford Young Company.

“These days we bring to our shows both our life experiences and the time we’ve spent together developing the craft of acting. That kind of shared history in a theatre company is rare in North America. We’re a company where ‘familial’ is a real word, with all that it implies.”

Silences in the play: