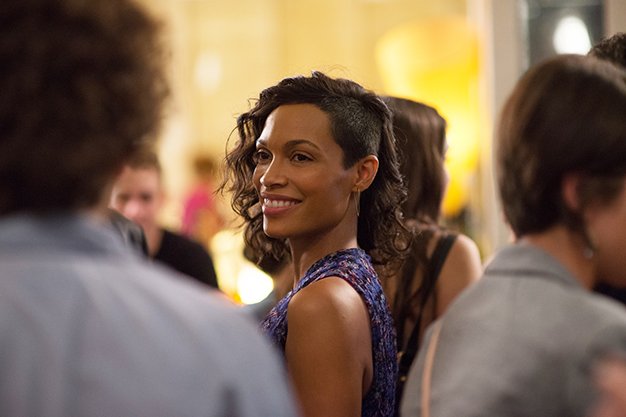 Chris Rock’s Top Five is a hilarious, fictional take on the comic’s experience with fame, complete with an outrageous ménage à trois and inventive repurposing of hot sauce.

Rock stars in the day-in-the-life satire as Andre Allen, a comedian wandering around New York City while being interviewed by Rosario Dawson’s Times reporter, Chelsea. Throughout their bickering and flirting, you gather a sense of melancholy over how much the city and hip-hop have changed in the last 20 years both lost a bit of their soul to corporate development. Few are more suited to discuss this topic than Rock’s good friend Dawson, who walked the same New York streets in her screen debut two decades ago.

“I’m the K in Kids,” Dawson says, referring to the controversial film’s poster, where her face is featured behind the first letter in the title. She shot Kids when she was 15, during the same year that Nas’s Illmatic and Biggie’s Ready To Die dropped. Hip-hop was enjoying its golden era, and New York City was a different sort of beast.

“We use a pay phone in Kids,” Dawson recalls, explaining why the plot, about inner-city teens who scour the streets searching for each other, wouldn’t work today. Jennie would hit up Telly on Twitter and the movie would be done.

“You left messages for people at their homes or at places. You didn’t call them directly. It’s the New York I remember.”

On the phone from you know where, Dawson discusses how (like Rock, hip-hop and the Big Apple) her own life has dramatically changed since Kids writer Harmony Korine and director Larry Clark discovered her on a porch. Back then she was living in an abandoned building, dreaming of going to college to become a marine biologist or civil engineer. Now she’s gone Marvel, starring in the new Daredevil series for Netflix.

“Larry and Harmony are the best casting directors in the world,” says Dawson, “because they cast me. They turned me into an actor.”

For Top Five, Rock pursued and practically begged her to be his onscreen muse, but she wasn’t having it at first.

“I needed to take a moment,” says Dawson, explaining that she lost her grandmother (who paid for her to attend Strasberg) and had not yet taken time off to mourn.

“My grandmother was a really important, phenomenal force in my life. It’s still shocking to me that she’s gone. Then here comes this friend I’ve known since I was 19 offering me this role that he said he wrote for me.”

Dawson also had hesitations about the script, which at the time was more of a blueprint. She didn’t have an instinct for her character and has had experiences where that kind of scenario went sour.

“I’ve been there before where they’re like, ‘Yeah, just sign up and we’ll fix it before we start shooting,'” she says. “And then that never happens. I didn’t know if it would work.”

“Chris said, ‘Don’t worry. I’m not just going to assemble a bunch of my friends, roll the cameras and hopefully have something to edit later. She’s not Chelsea yet because you need to be her. You will make Chelsea happen.’ He convinced me. It took a while.”

Dawson on choosing acting as a career path.

Dawson on working with Chris Rock.