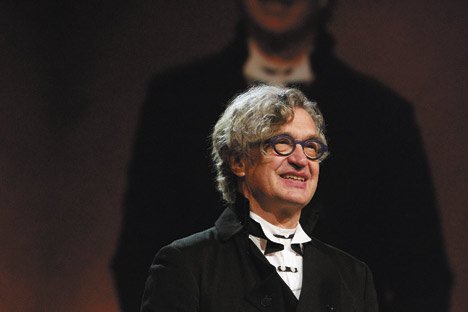 Wim Wenders waited 20 years to make a documentary about dance great Pina Bausch, only to have his subject pass away two days before shooting was to begin.

“It was completely unforeseen,” says the Wings Of Desire director. “She was diagnosed with cancer and five days later she was dead.”

We’re sitting in a quiet hotel room on the first day of the Toronto Film Festival, and the elegant German auteur, his face dominated by a pair of rounded black-framed glasses, is telling me about the influence Bausch had on his life and work.

He vividly recalls seeing her Café Müller in Venice in 1985.

“I’d never been interested in dance before,” he says, so softly I have to move closer to hear. “I’d seen some classical ballet and modern dance, but it didn’t touch me. When I saw this, it moved me like nothing else. Pina’s use of dance as language, of bodies and movement, was on one hand very cinematic, and on the other went beyond anything I’d ever seen in movies.”

He approached Bausch about making a film, and she gave her consent, but the director soon realized film couldn’t capture what he witnessed onstage.

“When you see dance live, especially Pina’s work, it has a quality that doesn’t translate to the screen. I didn’t know what it was and racked my brain trying to find a solution.”

Then came the idea to film in 3-D, long before James Cameron’s Avatar hit the screen and made it viable.

“3-D enabled me to enter the kingdom of dance,” he says. “Which was space.”

Bausch’s sudden death, however, ended the project. Wenders called off the film, believing it pointless. But her dancers, still shaken from their loss, convinced him to continue.

“They were rehearsing four pieces that Pina had programmed, and said they didn’t know if they were ever going to dance these again,” he says.

He came up with another concept, filming these four pieces, as well as dance segments in and around Bausch’s Wuppertal theatre. He also interviewed the dancers, although definitely not in a “talking heads” style.

“I realized if I couldn’t do a film with Pina, I could do one for her,” he says. “I could make a film together with the dancers. Not so much with words, but with dance.”

Wim Wenders’s homage to dance great Pina Bausch is Germany’s entry for best foreign language film and has also made the long list for best documentary.

Wenders on his original concept for a Pina Bausch documentary:

What he asked Bausch’s dancers, and why he decided to have talking in the film:

On where Bausch’s company is now:

On whether he’ll release the full versions of four of Bausch’s works in 2- and 3-D:

On the death of Peter Falk, who starred in Wenders’s Wings Of Desire: