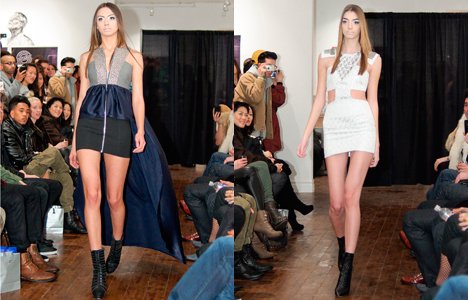 No, I’m not talking about the Amanda Lew Kee show on Friday night. In that case, some things are better left unreviewed lest my tendency to look on the bright side of poor construction and cheap fabrics be added to the chorus of gentle write ups that convinced a still very under development label that it was ready for a prime time runway spot and the thousand-plus judgmental eyes that come with it.

I’m talking about Cara Cheung, an equally young designer with a similarly downtown, entrance-making aesthetic, who presented her line on March 23 at steamy Show + Tell Gallery with surprising polish.

That evening, the rest of Toronto’s style media (save a few front row bloggers in after-eight sunnies and man fur) were home laying out their outfits for the fashion week ahead but a still-packed house buzzed for the recent Ryerson grad’s debut.

The first look out was a very little black dress with triangular patches of sequins on the hem and bust divided by strips of black tape. Next, the same style in white, followed by longer-in-the-back numbers with studded collars and cutout minis that looked surprisingly flattering in a season when so many other love handle baring attempts didn’t. The fit and finishing was nearly flawless.

And if you’re thinking, “where would anyone wear something like that,” a publicist I know slipped into one of Cheung’s samples for the Heart Truth Fashion Show on March 25 and reports looking (and feeling) fabulous in it.