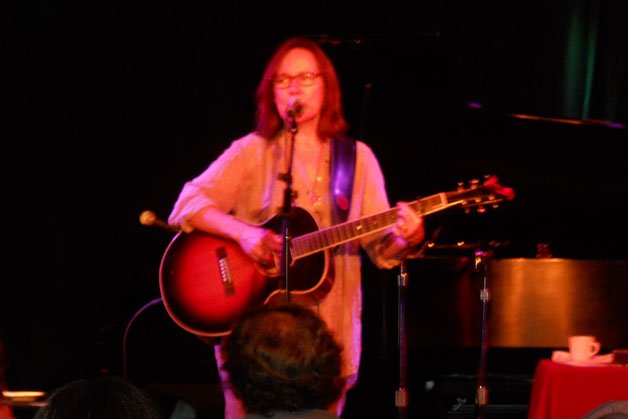 Country-folk great Iris DeMent had an everyday, down to earth demeanor as she settled in for two back-to-back sold out shows at Hugh’s Room (she plays there again tonight).

Opening with Sweet Is The Melody (off of 1994’s My Life) and the title track off 1996’s The Way I Should, DeMent was full of humility about her rusty guitar playing – she’s moved almost entirely to the piano in recent years. She also joked that making her new record, Sing The Delta (her first album of original material in 16 years) had blown her plans of returning to waitressing.

DeMent spent most of her generous set behind Hugh’s Room’s baby grand, working her way through all of the songs off her new album, and throwing in her most popular songs, Our Town and Let The Mystery Be, and a couple gospel songs off 2004’s Lifeline.

Sing The Delta has been described as melancholy, and it is in the sense that many of the songs are long and slow and dedicated to lost loved ones (DeMent’s mother recently passed away at 93, and her father, who died in ’92, also shows up on the record).

But live the songs felt kindred, soulful, life-affirming and deeply personal, more about where DeMent is coming from geographically, emotionally and spiritually than specifically about theology or religion.

The audience was so with her that a forgotten chord only drew them in closer to the music, and she spoke of the inspiration behind some of the songs: her forthright mother (Mama Was Always Tellin’ The Truth), country hero Tammy Wynette (Makin’ My Way Back Home) and a plant in her garden (Mornin’ Glory).

She didn’t, however, speak about The Night I Learned How Not To Pray, segueing into it after an upbeat love song for her husband, Greg Brown, called This Loves Gonna Last. Perhaps some things are too personal to talk about in front of a crowd.