NOW MagazineNewsIs Barrick Gold’s chairman stepping down or was he shown the door?

Is Barrick Gold’s chairman stepping down or was he shown the door? 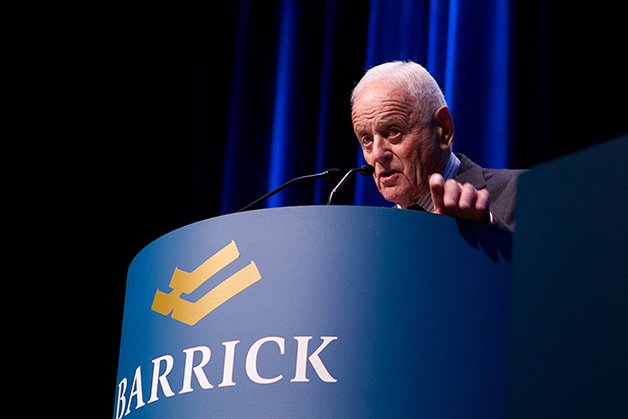 In a crucial moment for Canadian mining royalty Barrick Gold Corporation, its legendary founder and chairman Peter Munk steps down this week at its annual shareholder meeting in Toronto.

Munk’s departure has been the talk of the mining industry this year. His retirement will leave a legacy at the company and in the sector itself, but whether that’s a legacy for success or environmental degradation in Chile and Papua New Guinea, as well as alleged serious human rights violations, remains to be seen.

Few details have been made public surrounding the circumstances of Munk’s departure, but the company has also been through perhaps its roughest streak yet.

Until this morning, it was in the midst of merger talks with its chief rival Newmont Mining. Newmont chairman Vincent A. Calarco sent a letter addressed to Thornton saying that Munk, referred to as co-chairman, had killed the deal, calling it “dead.” In the letter, the company says, “That unilateral declaration made us question whether we actually shared the vision and values that are necessary to forge a successful new company.” The letter says they have unanimously decided not to pursue the deal.

Clearly, Munks retirement will leave a noticeable absence of audacious leadership. At 86, still donning his classy fedoras and neck scarves, the man is noticeably frail. But if this letter is any indication, he’s still the same man known for his bold business decisions.

More than three decades ago, Munk, then the founder of oil and gas company Barrick Resources, held his first annual meeting announcing the unorthodox switch to gold extraction following huge financial losses in oil and gas.

It was a decade before the company became Barrick Gold Corporation. Today, Barrick is worth about $22 billion, and with more than a dozen mines globally, it is the largest gold company in the world.

As Munk gives his final address at this week’s meeting, the question remains: is the business legend stepping down or being shown the door?

The company is currently trying to recover from one of its worst years on record with numerous write-downs (a reduction in the net income) making the overall value US$10.37-billion.

The largest culprit in these losses is its flagship Pascua-Lama mine project that is currently suspended for failing several environmental regulations.

Also, its acquisition of Equinox Minerals mining company for US$7.69 billion has been disappointing and forced the company to write-down US$4.2 B.

Both investments have seemingly hurt the company and plunged it further into debt and contributed to the loss of its AAA Credit rating.

“Rising costs, poor capital allocation and the pursuit of production growth at any cost in the industry have led to declining equity valuations across the sector,” CEO Jamie Sokalsky said in a release to shareholders last year.

Many of Munks long-time supporters and critics were expected to be on hand for the milestone meeting this week.

One of Barrick’s most outspoken critics, Sakura Saunders, said that while Munk can be linked to some of the more negative business decisions, his departure has little impact on the direction of the company.

“He has done a horrible job, their share prices are down. But the company is not resolving the issues I care about, whether he is in power or not,” she said.

According to a report by Human rights Watch, private security guards employed at the Porgera Gold mine owned by Barrick have been implicated in alleged gang rapes and other violent abuses.

The Norwegian Pension Fund investigated whether riverine tailings disposal from the Porgera mine in Papua New Guinea caused severe environmental damage. It established that the mining operation at Porgera created enough pollution that the fund excluded Barrick Gold on ethical grounds in 2009.

One of the more controversial projects under Munk’s leadership has been the Pascua Lama project under development for the past 20 plus years in northern Chile.

It was considered a feather in the company’s cap because it would be a low-cost gold, silver and copper mine. The project, located almost 5,000 metres high on the border of the Chilean-Argentine mountains poses many risks. The project would use large amounts of water and chemicals such as cyanide to separate the gold. If even a small amount of waste drained into the rivers it would have devastating effects for the community living in the valley already suffering from low water levels.

The project has hit several roadblocks with communities protesting the mine, several lawsuits filed against Barrick and paying millions of dollars in environmental fines.

Barrick spent $6.7 B on the mine site before the shut down last October, however its cost have increased to an estimated $8-$8.5 B.

To top it off, just last week it was reported that a multi-billion dollar securities class action suit had been launched on behalf of shareholders against the company and several of its senior officers, including Munk, over the losses on Pascua Lama.

It is one of several lawsuits filed over the years against the company’s production of the site, including others by indigenous communities claiming illegal use of their ancestral lands, and others claiming a share in mining rights on the land.

The law firm representing the shareholders is expected to file a more detailed statement of claim in the next 30 days. But, if past cases are any indication, the powerful company will likely put up a vigorous fight.

Many will be wondering this week if Munk’s departure will lead to a turnaround for the company, or if the damage has been too great to be undone. Saunders, who also edits the site Protest Barrick and often leads the group of protestors outside of Barrick’s annual meetings, called the lawsuit a sign of the company’s demise. “While I much prefer Barrick’s money to go toward the communities whose lives it has hurt and whose environment needs repair, there is some sort of poetic justice to Barrick’s own demise being the greed of their own shareholders. And it’s really important to note.”

Representatives from Barrick Gold were contacted for this article but did not provide comment.

Christian Peña is a freelance journalist and photographer.