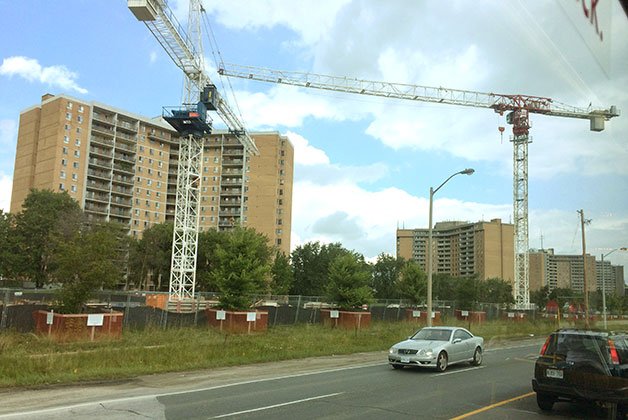 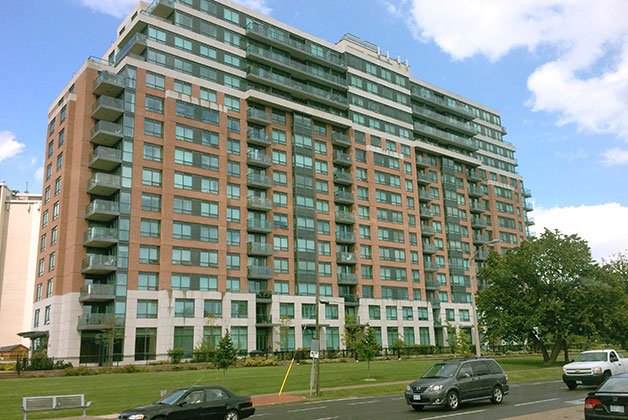 SmartTrack proposes 22 stations along two existing GO Transit lines running from the airport corporate centre in Mississauga west of Kipling to Unionville in Markham in the east.

While critics have questioned where Tory’s going to find the money to finance the $8 billion project – they say Tax Increment Financing (TIF) on the scale he’s proposing has never been successfully tried before – there’re two potentially larger obstacles. A drive along Eglinton West – or a ride on the 32 bus – reveals these problems clearly.

Ninety per cent of SmartTrack’s 53-kilometre route will be on existing GO Transit lines, but approximately 10 kilometres would have to be built in a completely new right-of-way along Eglinton West. The kicker: much of that land, known as the Richview corridor, was transferred to Build Toronto in 2012, and has since been sold to developers who’ve been busy building condos and townhouses on it.

A spokesperson for Team Tory refused to acknowledge that the Richview corridor is unavailable, or to answer whether or not tunneling through this section of the route would be achievable within the project’s $8-billion cost projection. Amanda Galbraith says engineering and cost projections will happen after the election.

“We’ve always stated that, for a complex project of this size, engineering will be required to lay out the exact alignment of the entire track. This includes land which is held by Build Toronto, the city of Toronto, etc. The key to SmartTrack is that it will be built without disrupting traffic on Eglinton Avenue,” says Galbraith in an email.

Similarly problematic is SmartTrack’s proposed path through the Mount Dennis neighbourhood. Eglinton is too narrow here to accommodate a rail line on the surface without demolishing homes.

The community fought hard and won against Metrolinx’s plans to demolish homes here to build the Eglinton Crosstown terminus, which is part of the Transit City plan, at Weston Road. It’s unlikely to roll over for another transit scheme.

Last week, Galbraith clarified that this section of SmartTrack could be tunnelled or elevated to get around neighbourhood objections, but transit expert Steve Munro says any tunneling would be prohibitively expensive, in part due to the new Eglinton Crosstown station which sits under the existing tracks.

“That curve is not going to be an easy one,” Munro says. “If you went down a long way, it commits you to building an expensive deep bore tunnel. You’d have to start digging the tunnel somewhere south of Eglinton.”

He adds that “The demand out there simply does not justify the cost of a fully grade-separated operation.” That’s why any plan to go west along Eglinton has always been bus rapid transit or LRT, Munro says, citing studies done in the 1980s and more recently for Transit City.

Which raises the question: why build it at all?

The city already has an approved (but not funded) plan for continuing the LRT line along Eglinton West. Since SmartTrack only includes two stops in Etobicoke, the LRT would provide better local service.

But at least one transit expert says that tunneling might be worth it if ridership studies – which a spokesperson for Tory’s campaign says will be up to Metrolinx to complete – indicate that the demand is there.

Eric Miller, a professor at University of Toronto’s Transportation Research Institute, believes that the growth of the downtown core and Mississauga have changed travel patterns so much that ridership numbers may be higher than 1980s studies predicted.

But more questions arise on the eastern portion of SmartTrack, where Tory proposes to run trains to Kennedy Road on the Unionville GO line. This portion of the line is meant to serve Markham and Scarborough while relieving some of the congestion on the Yonge subway line.

Miller suggests that the line could shave a significant portion of the ridership off the Yonge line if service is provided every 5 to 10 minutes. But Tory’s plan proposes running service every 15 minutes. By contrast, the TTC runs subway trains every 2-3 minutes on Yonge during the morning rush.

SmartTrack would also run parallel to – and less than 2km – from the proposed Scarborough subway, up McCowa, which Tory also supports. The two modes would likely cannibalize each other’s ridership. On this, both Munro and Miller agree.

“The decision of converting the LRT to subway was a one-off in absence of other possibilities, in particular idea of SmartTrack wasn’t on the table,” says Miller. “I think you do have to re-evaluate what you want to do with the Scarborough subway. Is it made redundant by this other route that has a much bigger geographic scope? Is it cost effective?”

But team Tory maintains that the subway and SmartTrack can coexist, even without any completed studies to back up the need for both.

“We will have a detailed ridership study, but express rail and local service transit operate side by side in major cities around the world,” Galbraith says.

Says Soknacki: “We’re seeing all of the problems that happen when you design transit on the back of an envelope. We would be far better… offering competitive visions to finance what’s already approved.”

Miller says that an election campaign may not be the best time to debate the merits of new transit infrastructure.

“There’s a real danger that one could either end up locking into a bad idea because it’s won the day. Clearly, there’s a political element because we’re spending public money, but there has to be a more technical evaluation of why it makes sense, and an election campaign isn’t the best place to do that,” Miller says.