Is Trudeau For Real?

I’d love to meet the new PM in a legalized pot joint for a celebratory toke six months from now, after he fulfills his many promises 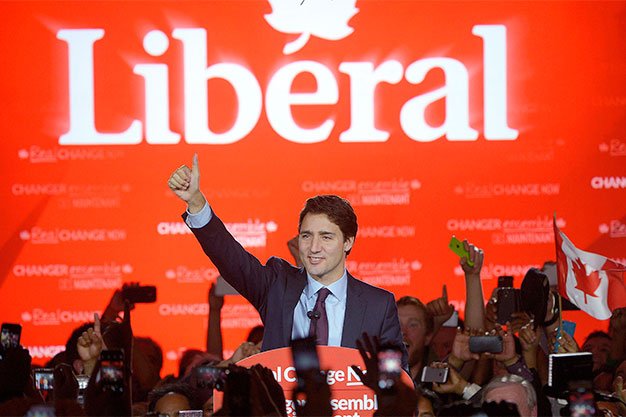 Talk of electoral waves seems more real now because I just a saw of bunch of my friends, very good people, get washed overboard by the Liberal political tsunami in Monday’s federal election.

The electoral casualty count of fine NDP MPs and candidates is so long that any list I might try to compile would invariably leave off many very good people. The new Parliament will be less for it.

Justin Trudeau ran a great campaign, effectively speaking to that beating heart of goodness that many Canadians define themselves by. Imagine if he is sincere. I’d be delighted if his running left is an actual plan for governing.

I’d love to meet the new PM six months from now at a legalized pot joint for a celebratory toke after he fulfills his promises to legalize marijuana, revise Bill C-51, call an inquiry into missing and murdered aboriginal women, enact electoral reform and so much more.

“Lovin’ the Bubba Kush,” the prime minister might mutter. “Chocolate milk’s on me.”

Rewind to 48 hours after election night 2011, when everything seemed so possible. Jack Layton smiled as he contemplated the slate of under-30-year-olds in his caucus and said, “They say they want more young people in politics – why not as MPs?”

Well, why not as prime minister, I guess? It is cool having a young PM who will look awesome on the international stage. Who wasn’t charmed watching him and his wife, Sophie Grégoire, herd their kids as they took in election results? It reminded me of Layton with his granddaughter Beatrice on his lap in his suite on that other election night.

We shouldn’t have been surprised Trudeau was such a good campaigner and politician. He studied at the feet of one of the best, his father, as well as Pierre Elliott’s powerful pals.

In the end, one-time front-runner Tom Mulcair of the NDP proved much better in Parliament than on the campaign trail.

I’ve spent time with him, and he’s personable, engaging, intelligent and occasionally funny. On the hustings he seemed stiff and heavily stage-managed, as if there were a Tom his handlers were desperate we not see.

I wish we had seen more flashes of “angry Tom.” Anger and passion can coexist, and Mulcair lost the day in part because he seemed passionless beside Trudeau’s dashing determination.

Yet again, when sniffing power, the NDP tried to sanitize itself and present itself as a less scary version of the party that was actually attracting voters in record numbers in the first place. The Mulcair front-runner deadman’s float was reminiscent of the disastrous tactics employed in Olivia Chow’s ill-fated mayoralty campaign.

I could complain about how a desperate rush to the strategic voting that so pains me almost wiped out the NDP.

But had the Dippers been seen as the party of change and managed to hold on to their front-runner status, strategic voting would have served them instead of the Liberals. All things being equal, they fell to third in the polls, and no amount of reminding voters that they were closer in seats than the Libs to toppling the Cons would change that.

A weight is lifted now that Stephen Harper’s return-of-the-Reform-Party social-conservative Conservatives are gone. Let’s hope the much more honourable tradition of Progressive Conservatives, the Red Tories of Bill Davis and Joe Clark, replaces them, so we don’t find ourselves in the right-left disputes that sink into the racism and division of Harper’s horrible rule.

I hope Canadians get the real change they think they voted for, not a shuffling of the deck as the two ruling parties exchange places yet again. Canada doesn’t need the Liberals to fail. Canada needs them to deliver. I hope the promises turn into more than wishes. With a huge majority, Trudeau has no reason to hesitate in delivering the progressive agenda he laid claim to. He really needs to deliver on electoral reform, but this one I am especially skeptical about ever seeing.

For the NDP, meanwhile, it’s time for soul-searching  – and trying not to contemplate what might have been if cancer hadn’t claimed the party’s champion.

More importantly, it’s time for the party to stop trying to squeeze into some ill-fitting electoral suit to hide what it is, stop trying to out-old-school the old-school parties, and to be the change the NDP has promised for so long.

An NDPer seeking solace on election night told me that, at least, for the first time in Canadian history, this country actually visualized an NDPer as PM. They just didn’t pick him. Cold comfort, perhaps.

But I can’t help wondering what author/activist Naomi Klein is thinking as someone who’s had her own master’s class in politics from her activist family, as well as her in-laws in the Lewis clan. Her Leap Manifesto, as NDP party policy, represents real change, with fresh policies. And Naomi, you could get a new book out of it, My Life As Prime Minister Of Canada.