Suddenly, doing nothing isn't an option: PortsToronto continues to fly under-the-radar plans to extend runways into the harbour 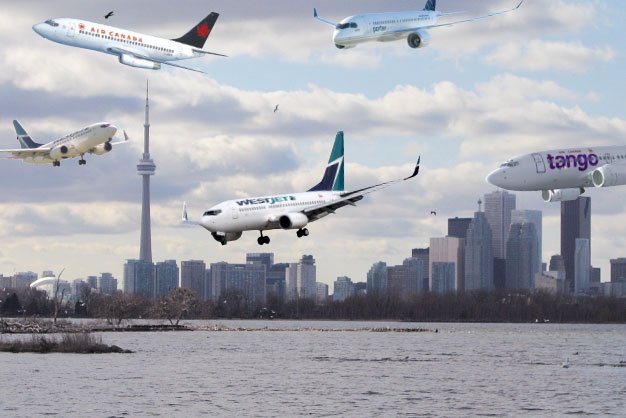 While all eyes are on council’s upcoming decision on what to do with the easternmost section of the Gardiner, further west along the waterfront talk of Island airport expansion just won’t go away.

PortsToronto continues on course to fly jets out of an expanded airport from runways extending into Toronto Harbour, despite everything we already know about the havoc that would wreak on the waterfront and the mayhem it would unleash on neighbourhoods around the foot of Bathurst.

A 30-day public review of PortsToronto’s Study Design Report, which makes the case for expansion, wrapped up on Wednesday, May 20. All of a sudden, the do-nothing option is not a possibility, at least for expansion proponents, despite council’s decision in April 2014 requiring strict caps on airplane and passenger numbers.

Prepared by AECOM, a vast multinational engineering company, the report sets out the parameters for the environmental assessment that’s to follow. It lays out two scenarios, both involving significant growth in traffic at the airport.

The first, based on the theoretical maximum passenger flow allowed under the tripartite agreement that governs the airport, envisions an increase from today’s 2.4 million yearly travellers to 3.7 million. (As recently as 2009, the airport handled just 770,000 passengers.)

The second scenario, which factors in the CS100 jets for which Porter Airlines is trying to get approval, raises that number far higher, to a total of 5.5 million passengers a year.

Those numbers are a problem for Waterfront Toronto, which is concerned that the airport not be allowed to overwhelm all other activities and uses on the waterfront.

Norman Di Pasquale, who heads up the activist group NoJetsTO, is more blunt.

“The bias is obvious,” says Di Pasquale. “They’re looking for how to make this happen. They’re not asking, ‘Should this happen?'”

Runway extensions and the addition of large jets and millions of passengers to a 200-acre lakefront airport would have far-reaching repercussions for the entire downtown waterfront.

The proposed EA will study a large range of issues, from traffic intensification to the impact on wildlife and water quality of landfilling big areas in the lake to extend the main runway by 400 metres.

The wind, or “jet blast,” generated by the engines of the proposed CS100 jets is a particular concern of Bathurst Quay residents. Preliminary designs in AECOM’s report for the extended runway include barriers that engineers hope will mitigate the negative impacts.

While what will be studied is fairly clear from the Study Design Report, how those studies will be carried out remains undetermined. The methodology described is vague in many areas, and clearly inadequate in others.

The municipal politicians who represent the wards along the downtown waterfront are giving the report a thumbs-down for different reasons.

Trinity-Spadina Councillor Joe Cressy says the the EA scope proposed by PortsToronto “is simply not robust enough and shouldn’t be supported by council.”

“The questions entirely miss the point, comparing two future states of the Island airport under different growth scenarios, one with jets, the other without. The EA will not be looking at the current state, or the ‘do-nothing’ option.”

Both Cressy and McConnell also stress that an agreement capping the number of flights and passengers has to be reached before any environmental assessment can be considered.

The April 2014 city council decision to study airport expansion required the development of strict caps on passenger and airplane numbers, something Cressy says PortsToronto has refused to agree to.

Critics have reason to hope the Study Design may yet reflect their concerns.

While some online information from PortsToronto refers to the current report as a final draft, that seems to be far from the case.

There will be two ways for stakeholders, expert authorities and other interested parties to weigh in and try to influence the shape of the finished Study Design.

Waterfront Toronto announced on April 28 that it will be leading a third-party peer review of the Study Design Report – to be paid for by PortsToronto – that will solicit input from an independent team of expert consultants.

The review will be overseen by a steering committee made up of representatives from the city of Toronto, the Toronto Region Conservation Authority (TRCA), PortsToronto and two stakeholder groups. That means the scope of PortsToronto’s EA won’t be decided until the end of June.

Meanwhile, the Greater Waterfront Coalition has asked the PortsToronto board for funding to investigate two issues not included in its report – namely, safety issues and the economic feasibility of an expanded airport, two important areas that are currently being overlooked.

John McLeod asked PortsToronto what its criteria is for saying yea or nay to Island airport expansion. The port authority has never been shy about pumping Porter Airlines’ plan for the waterfront. Here’s the 10-point “do no harm” pledge PortsToronto provided us.

1. Strict noise restrictions will be “maintained and adhered to.”

Reality Music to the ears of waterfront residents, but how realistic is it that noise won’t be an issue if barriers will have to be erected to deal with jet blast?

Reality There’s no way the envisioned airport expansion – and consequent growth in passengers – can be accommodated without increasing the number of daily flights. And PortsToronto has yet to agree to a cap on flights.

3. There will be “no material negative impact on the environment.”

Reality How do you define “material”? It’s clear to everyone but climate-change deniers that environmental and health effects from jets on the waterfront will be wide-ranging.

4. The surrounding area will be no less livable than any other mixed-purpose Toronto neighbourhood.

Reality It has always been PortsToronto’s position that those living downtown should expect a certain amount of noise and pollution. See the Gardiner Expressway. But should that include noxious fumes from jet fuel?

5. Work will be completed to improve vehicle traffic flow and the use of transit/shuttle service.

Reality No amount of traffic control will solve the mess at the foot of Bathurst.

6. The aircraft being considered meet the strict standards of the existing tripartite agreement.

Reality Actually, the CS100s Porter wants to fly out of the Island airport do not meet the noise standards of the tripartite agreement. The jets are louder on takeoff and landing than the turboprops being used now.

7. Access for the boating community will be preserved with no meaningful navigational impact.

Reality Who defines “meaningful”? The extension of the runway being contemplated not only encroaches on the existing Marine Exclusion Zone, but would also require jets to come in at a much lower angle, cutting off access to the harbour.

8. Private aviation access for small aircraft will be maintained.

Reality The port authority has in fact been squeezing out general aviation to provide more slots for commercial flights.

9. There is a business case supporting PortsToronto’s investment, including “consideration given to long-term financing and tripartite agreement extensions, if needed.”

10. Toronto’s economy will grow and benefit.

Reality The development, and the jobs that go with it, that would be snuffed out by industrialization of the western waterfront far outweigh any benefit of an expanded airport.