No airport is an island, but pro-expansion forces have been having their way with ours for decades 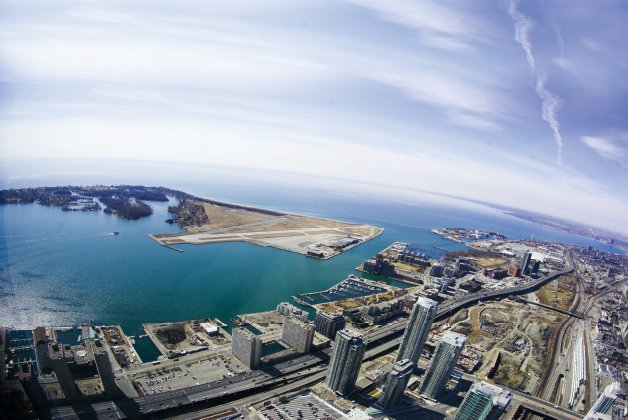 Council’s decision Tuesday, April 1, to move forward with further study of Porter Airlines’ Island airport expansion plan isn’t the first time in the airport’s 80-year history that talk of getting bigger has brought political blood to a boil.

The difference this time: it’s hard to overstate what a massive change the CS100s Porter is now proposing to fly out of Billy Bishop would represent in the airport’s development.

From its beginning in the 1930s, the airport was home to small private and charter aircraft – what’s known in flying circles as general aviation – though during the war it was used as a training base for Norwegian military flyers.

The first commercial flights didn’t happen until 1975, when now-defunct Otonabee Airways began running three flights a day to Montreal. In 1981 the city agreed to allow the expansion of this operation to a limited commercial service.

Many in the local community were against this increase in activity, and that opposition became the official stance of the pre-amalgamation city of Toronto.

What was then the Metro level of government took the opposite position, and in 1983 the Harbour Commission, predecessor to the Toronto Port Authority, signed what became known as the tripartite agreement with the city and the government of Canada.

That 50-year deal specified the terms and limitations governing commercial operations at the airport. It was supposed to stabilize the situation there.

The aircraft were restricted to STOL (short take-off and landing) planes. Jet power was banned.

But since the signing of the tripartite agreement, virtually everything in and around the airport has changed.

It’s worth noting that in 1983 the area near the airport was essentially deserted. The beach on Hanlan’s just to its south was little-known.

Across the western gap, the Canada Malting operation had already ceased, and its silos stood derelict. Nearby was a peculiar outdoor exhibit of out-of-use railcars. A handful of small mostly marine-oriented businesses occupied the rough-and-tumble low-rise buildings along the eastern edge of the harbour where members of the National and Alexandra yacht clubs tied up their boats.

The Tip Top Tailors building at Lake Shore and Stadium Road was still a manufacturing and warehousing facility and wouldn’t be converted to residential use for almost 20 years.

Otonabee flew a limited number of flights per day using de Havilland Dash 7 aircraft that had evolved from the company’s successful Twin Otter, with seats for up to 50 passengers.

In 1985, the tripartite agreement was amended to allow the use of non-STOL aircraft, de Havilland’s recently introduced Dash 8. That plane seated up to 39 people. Even though it was a non-STOL craft, the early Dash 8 required a takeoff distance of only 960 metres, so it was able to use the Island airport runways safely when fully loaded.

Air Ontario, later renamed Air Canada Jazz, began operating out of the Island airport in 1990, also flying Dash 8s. That continued until 2006, when Jazz was evicted from its rented premises by landlord Robert Deluce. Porter opened for business a short time later.

At that time, the airport was handling roughly 25,000 passengers per year. Porter’s aircraft were, and remain, the Q400, the latest in the Dash 8 family, now built by Bombardier since its acquisition of de Havilland.

Promoted as Q400s but technically designated as Dash 8-400s and therefore eligible to fly out of the Island airport, these planes are a far cry from the early versions approved by the signers of the tripartite agreement.

The Q400s are more than 10 metres longer. They also carry up to 80 passengers. In addition, the Q400s have a little-known problem flying out of the Island airport: they’re too heavy.

At its maximum takeoff weight, the Q400 requires 1,400 metres of runway, according to Bombardier’s own specifications, while Billy Bishop’s longest runway is 1,215 metres long.

In order to take off safely, the plane’s load must be limited to less than the otherwise-allowable maximum. It’s a potential fly-or-swim calculation that air crews now must make dozens of times a day to get these oversized planes in the air.

The maximum takeoff weight of the CS100 Porter is now proposing to fly is almost double the Q400’s. The CS100’s wing area is also substantially larger – 1,209 square feet versus the 689 square feet of the Q400. And of course, the jet is much bigger, with seats for as many as 125 passengers.

Facts and figures like these don’t provide a complete picture of what these jets would look like flying in and out of Billy Bishop. But other planes currently flying can help us imagine the scene.

Air Canada flies a number of Airbus A318s, while WestJet has Boeing 737-600s. If you’ve flown in either of these aircraft or if you’ve sat under final approach at Pearson watching them come in, you have a pretty accurate impression of what Bombardier’s new jets will be like.

The CS100 blasts the air behind its wings with almost 38,000 pounds per foot of force. For a point of reference, imagine a hundred V8-powered pickup trucks revving at full throttle. At many airports – and quite probably at the Island airport if jets are approved – blast walls are required to contain this tremendous power and keep it from escaping into the surrounding environment and causing damage.

When these planes need to be shunted into position at the terminal or pushed back toward a taxiway, the job requires not manpower but specially engineered diesel-powered tractors weighing 15 tons or more.

While Bombardier predicts that the CS100 will be more efficient than similar planes, it will still go through something like 5,000 pounds of fuel for every hour of cruising flight, plus considerably more during ascent after takeoff.

To put it another way, in just 60 minutes at cruising altitude the jet will burn the same amount of fuel that a Prius driver would use driving from Toronto to Vancouver and back about nine times.

Commercial jets like the CS100 also have vastly different landing requirements than small aircraft. Small planes descend quite quickly before landing, so the height of objects and structures around the airport is largely irrelevant. Not so with large jets which typically descend at a very shallow angle.

As Transport Action Ontario has noted in detail, this would have a major impact on the way Torontonians use the space around the Island airport.

Boating would almost certainly be far more restricted than it is now, both inside the harbour and in the lake south of Ontario Place. The current Marine Exclusion Zones would require radical expansion.

Ferry access to the Hanlan’s Point dock would be all but impossible. Tall ships would likely be banned outright from the harbour. Approach lighting may have to be installed under the final approach flight paths, further limiting boating. Building heights in future developments in the port lands at the eastern end of the harbour would be capped to ensure safe clearance for jets on final approach.

Virtually everything in and around the airport has changed despite the tripartite agreement that was supposed to keep expansion in check.

And now there’s a proposal on the table to go even further. Thousands of people now live within a half-kilometre radius of the airport. Many thousands more make their homes just outside that area, and new condominiums are going up all the time.

Haven’t we gone far enough – or perhaps too far already?

John McLeod is a freelance writer who occasionally likes to sail a boat in Toronto Harbour.

“Mr. Deluce wanted jets last July, he wanted them by Christmas and he wanted them by this term of council. He’s not getting them. There are no jets coming.” – Councillor Adam Vaughan, whose ward includes the Island airport.

“Is this a mature city confident in what it is, or are we still immature and every time a shiny bauble gets put in front of us we’re fascinated by it and run toward it?” – Councillor and Planning Committee chair Peter Milczyn, who wanted Island airport expansion killed by council Tuesday.

“As long as they [Porter] meet the conditions, then we move forward on it.” – Councillor Doug Ford. Nuff said.

“Is fixing the Gardiner a priority? Is addressing our affordable housing gap a priority? Those are where we should be spending our money.” – Councillor Mike Layton on council’s messed-up priorities.