Fire chief says the city is well equipped, but a 20-year-old report obtained by island airport expansion foes is raising red flags about emergency preparedness at the airfield 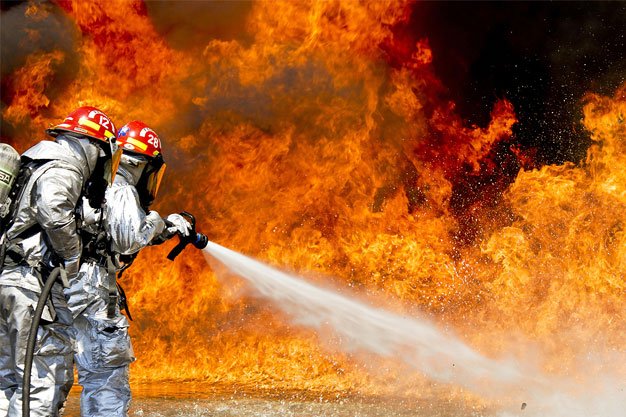 The stakes have been raised once again in the ongoing debate over Island airport expansion. At issue this time is a question that hasn’t received much public attention in the recent debate about Billy Bishop: how prepared are the city’s emergency services to respond to an accident at the airport?

Local activist Brian Iler, chair of CommunityAIR, has unearthed a 1993 report on Island airport emergency preparedness through an Access to Information request. It’s proof, he says, that the airport has been operating unsafely for over two decades and should never have been allowed to expand to its current size – let alone be enlarged to accommodate jets.

Authored by a committee of city, provincial and federal officials, the 58-page Intergovernmental Staff Committee Study Of Alternative Access Options To The Island Airport For Emergency Response Services raised serious concerns about the ability of first responders to reach the airport in the unlikely event of a major disaster like a plane crash or fire.

The report estimated that a crash involving a 50-passenger plane would require a response by 64 emergency vehicles from fire, police and ambulance services, and about 200 personnel. “The current ferry service would be incapable of transporting the emergency vehicles across the Western Channel as they arrive,” it said, predicting it would take up to two hours for all the vehicles to cross. The delay would waste precious minutes.

In order to provide more reliable access, the authors of the report recommended that steps be taken “immediately” to construct a bridge to the airport.

Lisa Raitt, then CEO of the Toronto Port Authority, which owns and operates the airport, advised at the time that a bridge was crucial to move equipment to the airport in the event of a catastrophe.

The bridge, of course, was never built. In 2003, amid public push-back against increasing activity at the airport, newly elected mayor David Miller killed the project.

Nevertheless, the airport was allowed to expand, and Porter Airlines began commercial flights in 2006. Activity at the facility has increased dramatically in the last two decades – from 215,000 passengers in 1992 to 2.3 million in 2012. Porter’s plan to fly jets out of the airport could double that number.

“If anything, the situation’s worse,” Iler says. The city is still studying Porter’s proposal, but Iler argues, “If we are concerned about safety, this airport shouldn’t be operating, and certainly shouldn’t be expanding.”

The 1993 report set out potential scenarios. The first crews to respond to a crash or fire would be those stationed at the airport. Additional help could be provided from Toronto Fire’s Ward’s Island station, eight minutes away. But according to the report, “Backup firefighting and ambulance services [would be] required immediately” to tackle a blaze and treat a potentially large number of casualties.

Within four minutes of an emergency being declared, the first emergency vehicles from the mainland would arrive at the ferry dock, according to the report, and within 30 minutes all of the required vehicles would be on the shore. But the ferries in service in 1993, which have since been replaced, could carry only four of these vehicles at a time. Further complicating matters would be the need to transport victims to the mainland in the opposite direction.

In addition to their capacity, the report raised several more red flags about the ferries’ reliability. Low water levels could make it difficult for emergency vehicles to board. High winds could prevent them from docking at their usual location and carrying vehicles. In the event of mechanical failure, it could take “30 minutes to several hours” for a backup ferry to be put in service, and it could take up to two hours to start up the ferry if an emergency occurred after airport operating hours.

The airport is equipped with an emergency response centre with five staff, two trucks and a mid-size pumper. The airport’s crew conduct regular training exercises in conjunction with Toronto Fire, Toronto Police Services and Toronto Paramedic Services, including “full-scale” emergency simulations every two years (the most recent in November) that “ensure that our airport is ready to respond to any situation,” according to Cabral.

Asked about the 1993 report’s concerns about ferry reliability, PortsToronto spokesperson Erin Mikaluk wrote in an email that both of the two new ferries “can reliably access the airport in any conditions.” She pointed out that high winds have affected ferry service only once in the past two years.

According to Mikaluk, the airport’s primary ferry, the Marilyn Bell, can carry up to 15 cars. She couldn’t say how many emergency vehicles the ferry can hold or how long it would take to get all the necessary vehicles to the airport following a disaster.

But fire Chief Jim Sales says the number of vehicles his department can deploy during an emergency is not as important as the number of personnel. In that sense, Sales says, the city is well equipped – the police service has a fleet of boats, and the fire department has an icebreaking vessel that can be pressed into service year round. A pedestrian tunnel to the airport is expected to open next summer, further improving access.

“We might be sending trucks at a later moment, but really the initial [goal] would be to get more people there,” Sales says. “And we’ve got the ability to move people obviously a lot quicker than those big trucks.”

Sales says there is enough firefighting equipment on the island to handle an initial response. “I’m confident that we have the ability to mitigate an incident there.”

Toronto Paramedic Services spokesperson Kim McKinnon says her department also has no qualms about its ability to respond to any kind of incident.

Still, these assurances are not enough to convince some of the airport’s opponents.

In addition to the potential for a disaster at the airport itself, Councillor Pam McConnell is worried about the possibility of a situation like the one that occurred in Taipei, Taiwan, earlier this month, when a plane crashed into a bridge shortly after takeoff and at least 31 people were killed.

“I don’t know what it’s going to take for people to wake up to the reality of what the safety issue is and the unsafe conditions,” she says. “The solution is very clear. You don’t have a busy airport in the sanctuary of a park and an island. It makes absolutely no common sense.”