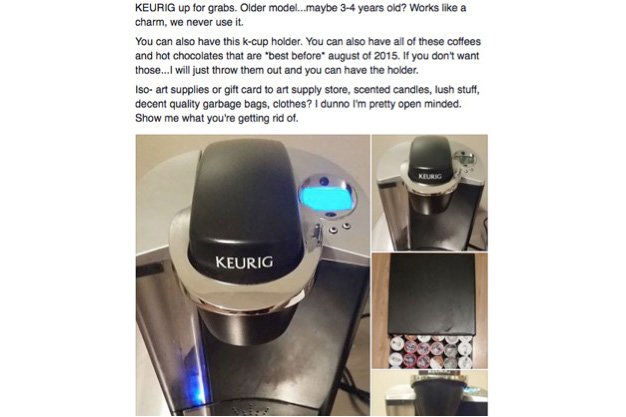 Games become apps, apps get turned into movies, and somewhere along the line, quotes from Frasier even got the app treatment. As the bracketed stage directions “Daphne is giving Roz’s ankle a massage” on a mobile screen prove, it has become far more surprising when an app doesn’t exist then when it does. So it comes as little surprise that the Bunz Trading Zone app is here, but its genesis from a private Facebook group to Toronto’s trade-exclusive mecca to an application more user friendly than Craigslist or Kijiji? Well that is pleasantly surprising.

“I started the Facebook group mostly out of necessity,” Bunz creator Emily Bitze says by email. “Most of my friends live in my neighborhood and there were times when I didn’t have enough money to buy food, so the idea was like borrowing a cup of sugar from a neighbour.”

In the early days, the Trading Zone was a group of friends, and friends of friends, who formed an idiosyncratic online utopia where items like houseplants, booze and tokens were king. Guided by one simple rule – no actual money can be exchanged – the invite-only zone was an endless garage sale where members exchanged what they didn’t want for what they did.

“There was a member who got a wheelchair for her father,” Bitze

says, recalling memorable trades from the group. “My friend Rachel got a Daniel Lanois-autographed CD for her uncle who is a DEEP fan, and there was a guy who was in search of Alf drawings done from memory that made me cry, I was laughing so hard.”

This blend of the incredibly practical with the arbitrarily non-sensical is what made Bunz such an entertaining and valuable clique to be part of. It had grown and evolved into a dedicated community that felt like a digital version of neighborhood watch, only with more sarcasm. Members helped one another track down stolen bikes, find apartments, get jobs and stay aware of safety concerns in their area.

“It’s not only trade stories but stories of good will,” Bitze elaborates. “Removing money from the exchange creates a more human interaction. People aren’t just looking for goods, they sometimes request advice, companionship and education. The result is an environment that helps fulfill needs outside of a traditional consumer-based exchange.”

But as word of the group spread and it expanded to include everyone and their thrifty aunt (as well as other Bunz groups sprouting across Canada), the simple and unpredictable module of a Facebook page could no longer support the quantity of daily posts.

Fittingly, Bitze met with a group of people through Bunz who had being working at a startup with a similar idea. A team of nine was formed and Bitze put the rest of her life on hold, cancelling her band’s European tour and quitting her side job at a vintage clothing store. “Currently Bunz is 90 per cent of my time,” she says. “My brain is now Bunz.”

The challenge was figuring out how to establish a new home for what was essentially a never-ending comment thread. “Everyone had opinions on how Bunz should be and I thought why not make it for them? I just didn’t know how. That’s why meeting my teammates was so important. They made the magic happen.” 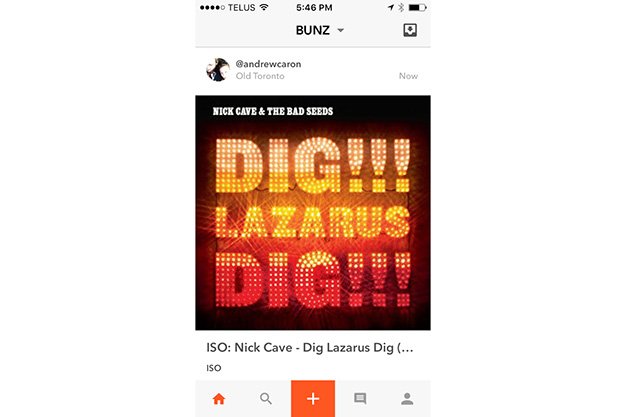 A screenshot from the new Bunz app.

Launched on January 13 for iOS (An Android version will arrive in a few weeks), Bitze and her team have built an app that retains the simple concept while vastly improving upon every other aspect of the experience. Users can scroll through their feed (a photostream which stacks like Instagram), search hashtags, users or categories (items, attention, in search of), rate each other based on trade experiences and report lacklustre users. Another addition is the ability to display all of your current items up for grabs on your own page, and more importantly, we all have something new to scroll through on the toilet.

“I think it will restore the focus more on trading, but we want the experience to be specific to the user,” Bitze says about the new creation. “Some want to do trades, and some want to have social interactions. It was imperative that the Bunz team do our best to preserve that very special community vibe as well as help facilitate the trades.”

Bitze and the team will continue to update and tweak the product as feedback from the community is received, and she makes a point of saying “It’s not perfect,.” Sure, the app might not be, but for something that elevates a premise that is already so beloved, it’s not far off. But if you don’t like it, well luckily there’s already an app for that too.