NOW MagazineNewsAt its worst, Mark Towhey’s tell-all reads like the memoirs of a psychopath

At its worst, Mark Towhey’s tell-all reads like the memoirs of a psychopath

Rob Ford's former chief of staff spent three years covering for him. Now he wants you to buy his book to find out how. 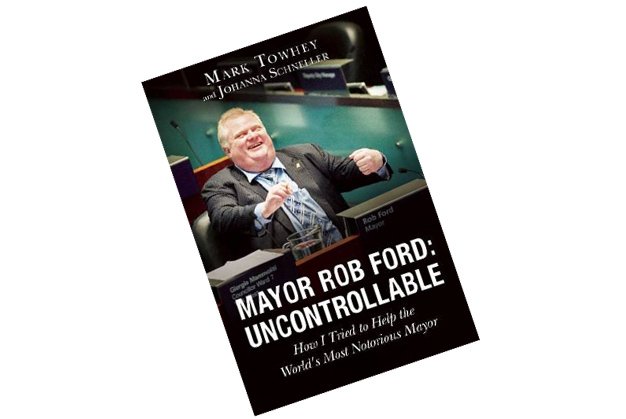 David Nickle, the longtime president of the City Hall Press Gallery and reporter for Metroland Media, has a side career as a respected author of genre fiction. The title story in his latest collection, Knife Fight And Other Struggles, starts: “Not many outside the confines of the political wing at City Hall would guess it, but our new mayor is an expert with a knife.”

One day toward the end of Rob Ford’s mayhem, perhaps in summer 2014, I spitballed with Nickle about how one would go about shaping Ford’s saga into a story: a movie, TV series, whatever. I’d imagined telling it from the perspective of the mayor himself, the most fascinating and compelling character in the world, but Nickle – whose City Hall office is next to mine – had a better idea. The Ford story, he observed, would be better told from the point of view of someone like Mark Towhey: the ex-military man who was by Ford’s side from day one of the 2010 campaign, worked in his office as director of policy and strategy, and eventually became his third of five chiefs of staff.

It was an excellent idea – a narrative from Towhey’s perspective could chart the arc of an ambitious crisis manager who would gradually find himself in far over his head, as layers of absurdity and darkness inexorably pile on. What would begin as a comedy about helping a buffoonish populist realize his goals would eventually transform into a dead-serious Sisyphean parable about managing the unmanageable.

Just over a year later, we now have such a work: Towhey’s tell-all, Mayor Rob Ford: Uncontrollable, co-authored with Johanna Schneller and published by NYC-based Skyhorse, came out today (October 27). In most respects, it fulfills the promise of the premise, explaining how the experience of working for Ford turned bit by bit from exhilarating to traumatic.

But it misses an element crucial for such a yarn – an outside vantage point. Towhey would be a superb vehicle for a narrative so long as someone else was telling the story and holding him up as a flawed protagonist whose questionable choices and malleable ethics implicate him in everything that happens.

The book’s subtitle is How I Tried To Help The World’s Most Notorious Mayor, but it could just as easily have been Why I’m Not To Blame.

I’ve never read Vladimir Nabokov’s Lolita, but my understanding is that it’s an unreliable narrator offering a longwinded rationalization for his own amorality. It’s helpful to view Towhey’s tome in a similar light.

Remarkably, by the end, he says the staff in the mayor’s office adhered to all of those principles, and suggests that he did as well – despite having just authored over three hundred pages explaining in detail his complicity in covering for Ford and doing everything to keep the man’s re-election viable.

It’s an astonishing feat of obliviousness.

But Towhey’s entire moral framework is skewed in the first place. For instance, in writing about how he and campaign manager Nick Kouvalis handled accusations of Ford’s homophobia during the 2010 election, Towhey explains there was no point in trying to change the candidate because they didn’t want to turn off a socially conservative base who “didn’t want to think of [Ford] as gay-friendly.”

There’s no indication that Towhey himself is homophobic (he briefly mentions the office’s efforts to convince Ford to participate in the annual International Day Against Homophobia and Transphobia flag-raising), but leveraging others’ bigotry for political gain is arguably even worse than bigotry itself.

Rather than interrogate the ethics of the situation, Towhey views it, like everything else thrown his way, as a puzzle to be solved or an enemy to be outmanoeuvred. In his mind, the human cost frequently seems secondary to the political calculus. In setting the scene for election day 2014, for example, he describes the the Jian Ghomeshi story that was dominating the headlines and makes a deeply uncomfortable joke: asking where that kind of news had been when he was trying to keep Ford’s “misdemeanours” off the front pages.

This past summer, in considering Earl Cowan – the loudly irascible Conservative supporter who called reporters “lying piece[s] of shit” for daring to inquire about the Mike Duffy scandal – Maclean’s Paul Wells made a valuable observation.

“Angry Yelling Guy’s point,” he wrote, “is that any system organized to keep Stephen Harper in power protects the Canadian taxpayer, because Stephen Harper runs a government that does less and costs less than whatever the Liberals and New Democrats would come up with.…[Conservatives’ electoral dominance serves] a higher goal: the protection of a limited federal state against the would-be architects of a bloated and overreaching federal state.”

There are people for whom the ends of conservatism sometimes justify extraordinary means, because few things could be less moral than a government that’s bigger than it needs to be. And while I don’t think Towhey is a libertarian fanatic to quite that degree, he does let his concurrence with Ford’s broad politics colour his thinking all the way. Only when he receives a tip from then-staffer David Price that Anthony Smith’s murder may have been tied to the crack video (it wasn’t), does Towhey believe things have crossed a line.

Up to that point, he has already witnessed or been reliably informed of all manner of mayoral dangers, from Ford habitually driving drunk to violently threatening his wife, possibly with a gun.

He found out almost right away that Ford had been a drunken, violent mess on St. Patrick’s Day 2012, but when reporters asked about Ford’s state that night, he would only say their information was incorrect – choosing to zero in on the claim that Ford had snorted cocaine, the one piece of the story not corroborated by accounts of the staff who were there.

With regard to 2013’s Garrison Ball incident, Towhey has consistently maintained that no one asked the mayor to leave the event – a formulation that conveniently excludes Towhey himself, who begged the fucked-up mayor not to arrive, attempted to physically bar him from entering, and then tried to drag him out as soon as possible.

Towhey maintains that these weren’t lies, as though a narrow truth uttered through the clenched teeth of deceitful contortions is somehow more morally sanctionable. It’s the same warped view of honesty that let Rob Ford claim in November 2013 that he hadn’t previously admitted to smoking crack only because reporters hadn’t asked him the right question.

In its worst moments, the book reads like the memoirs of a psychopath totally divorced from conventional morality and the consequences of his actions.

At its best, however, it reveals the emotional and physical toll that came with trying to keep the mayor’s office running at all costs. In a particularly moving passage, Towhey confesses that he was secretly hoping that Ford would lose his conflict-of-interest appeal and be booted from the job, giving him and the other staff an opportunity to finally escape from the thumb of a “megalomaniacal addict.”

But then a couple chapters later, he reiterates that he was still trying to set up the mayor for re-election.

You can look at it as an abusive relationship, and Towhey certainly frames it that way. For the junior staffers in Ford’s office, it most probably was. But Towhey’s drive to succeed as a master crisis manager, and his active roles in shaping policy and strategy, make it very hard for us to feel as sorry for him as he’d like.

He was a key player in everything that happened from the beginning of the 2010 campaign through to his firing in May 2013, and it’s valuable to have his account on the record.

But he also wants the book to serve as a cathartic, even therapeutic, release for himself. Absent self-awareness and contrition, however, he can’t possibly have an honest reckoning.

Towhey wants us to pat him on the head and assure him he did everything that he could to make a bad situation better. But instead, you kind of want to break it to him that, no, a lot of what happened is very much his fault, too.

No matter. Earl Provost, Ford’s subsequent chief of staff, stuck around in the mayor’s office even longer than Towhey and is now the executive director of the Ontario Liberal Party. There’s a market for this approach to politics just don’t ask us to pity you for it.