Toronto folk singer has a slew of holiday shows coming up 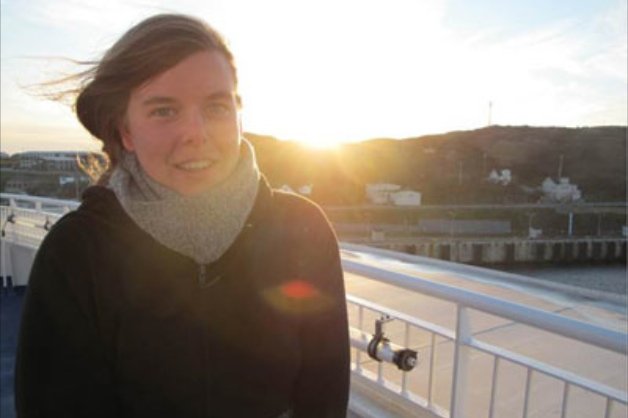 Soulful Toronto folk singer and Island native Ivy Mairi was only 19 when she released her debut album, Well You. Now 24, she’s followed up with a beautifully intimate sophomore disc called No Talker (both discs were produced by Cowboy Junkies’ Michael Timmins).

When we meet at Jet Fuel at 10 a.m. (I order coffee, her a mint tea) she’s already gone to an early morning group vocal lesson. She surprises me by saying that she had been suffering from vocal problems and a polyp when she recorded No Talker. A summer job as a canoe instructor a few years back hadn’t helped.

“A lot of the singing on the album was the last take I could manage,” she says. “Now I feel so good, so much better, so much more in control … next time I record an album, hopefully I’ll be able to channel exactly what I want to.”

Mairi does a lot of singing. On top of her own shows solo and with her band, she’s been touring with Bruce Peninsula for three or four years and has a traditional folk group with her mother and older sister called Kith & Kin she also sang on Isla Craig’s new album, Both The One And The Other, and a recent single called All My Trails with Rene LaVice.

Can you tell me a little bit about your first album?

I put out my first album, Well You, in 2007, when I was 19. I got my braces off I think it was the day after, or maybe the day before, I can’t remember. I remember those two things were this big milestone together. I felt like I was moving into adulthood or something.

You worked with Michael Timmins on that one as well?

Yeah, I met him when I was in grade 11. We would get together and record songs that I was writing. It was very casual, and cool for me, cause I wasn’t really playing live at that point at all, I was just sort of playing in my bedroom.

The island has a lot of working artists on it, who really connect with each other. My friend Anne Bourne, who I still play with now, introduced me to him when I was a teenager.

I often think about how I can draw almost all of my important contacts in music and just in life back to my neighbours and friends of my family on the Island, it’s a really good web of people. So I worked with him. I took a year off after high school – deferred going to McGill – and made the album with Michael Timmins and played out.

You don’t live on the Island anymore, do you?

I haven’t lived on the island officially for three or four years but my parents are awesome and they let me keep a bedroom there, so I still stay there a lot and I organize a music series on the island in the summers.

I’ve lived in the same apartment in Parkdale for the last three years, at Queen and Landsdowne, on MacDonnell St. It’s really good.

One of the reasons I moved off the Island was partly to live on my own, but also because when you’re playing it’s expensive to take the water taxi all the time. The last ferry’s at 11 or 11:30 and as you know, show’s are never over by then. Even on weekdays, it’s rare that they’re over by then.

Some of the songs on your new album reference other places in Toronto, like the East End. How much of a muse has Toronto been for you?

A big one. It’s where I grew up. And I think that I often connect with people who enjoy experiencing the city the same way I do. I’ve never lived in the East End, but I love going there – I find it very calm compared to the chaos and density of the West End. Biking is always nice there, it’s never too crowded. I think a lot of people that I know are very place-oriented and where you are affects how you feel and colours all of your memories of times in your life and people you knew and still do.

Recently I’ve been writing a lot of songs about the Island, actually. I think the winter inspires me, the bleak imagery. It’s so quiet and it’s really beautiful. I like going there in the winter.

How did the Kith & Kin project start? Did it begin at the same time as the annual Wassail?

We always had – the Wassail is actually the name of an event that we do around the Solstice on the Island every year. The Wassail is just a Solstice celebration in traditional British culture.

My sister and my mom used to sing together a lot. When I was 11 or 12 I started to sing with them and I think when I joined we started to work out more songs – it’s a lot of three part a capella harmony stuff.

When I started performing in the city, suddenly it was like, “oh, maybe our band could play in the city too.” So we did our show five years ago at the Imperial, in the old space, because our friends own it, and that was really fun. And then the last four years we’ve done it at the Music Gallery. And it’s really cool — I think it’s become a tradition for a lot of the people who come.

For a lot of my friends, it’s something that they can bring their parents to. They gave our CD to their mom last year and she wants to come this year.

It’s been a cool thing to do with my mom and my sister. We have a choir that sings with us: Isla Craig and Gabe Levine and D. Alex Meeks (who plays drums in Hooded Fang) and our friend Frank Griggs, who is the secret best shape note singer in Toronto.

I love your song I Can See You. Do you think that you’d ever do an all out soul album?

That’s really funny that you ask that, because I’ve been sort of in the very early stages of writing one. It’s the kind of thing where if I were going to do it, it would cost a lot of money, and I’d have to get organized properly, because there would be a lot of people on it.

I only have four songs for it at this point. One thing that holds me back from diving into that kind of project is thinking about how I would be able to not lose money on it, but I’m thinking about it. It’s coming together in my imagination anyway, which is first up.

Can you tell me the story behind the song Kenyatta?

It’s a much less dramatic story than the sound might suggest. I have an instrument, it’s a little drone harmonium called a shruti box, it’s an Indian instrument used in devotional music (I used to work at a store that sold them). This was years ago – Kenyatta’s the oldest song on the album, which is probably why it sounds so different from the others.

I was at the Imperial actually, my sister and I somehow left it on the street, and I had just gotten it, I had only had it for maybe a month. At a time when I had been feeling kind of uninspired musically, having this new instrument had really awakened some new ideas and made me really excited again.

We left it out on the street on Dundas and then got a few blocks away and realized we didn’t have it any more and rushed back to find it and we couldn’t find it, and so, it was this silly scene. I was pretty emotional in general at that point. I was crying on the street and this drunk guy came up to me and put his hand on my shoulder and said, “don’t worry, you’ll get another job.”

Ricky, the owner of the bar, called a cab for me, and I was about to get into the cab, and this guy walks out of the bar carrying the instrument out of its case and drunkenly playing with it.

So, he found it, and I said, “oh my god, thank you,” and he said, “oh, is this yours?” I asked if he was going to take it to sell it, and he said, “no, I was just going to get stoned and play it in my basement.” His name was Kenyatta, and he was, at the time, a bartender at the Hard Rock Café. I always meant to go visit him, but I never did.

I got in the cab, and that song I quoted in the song, World, Hold On by this French house artist Bob Sinclar was on (sings “world hold on” and the whistle solo). The cabbie turned it up for me – you know when cabbies do that when they think you want to party in the cab? It was a very euphoric moment riding home in this cab by myself with that song playing.