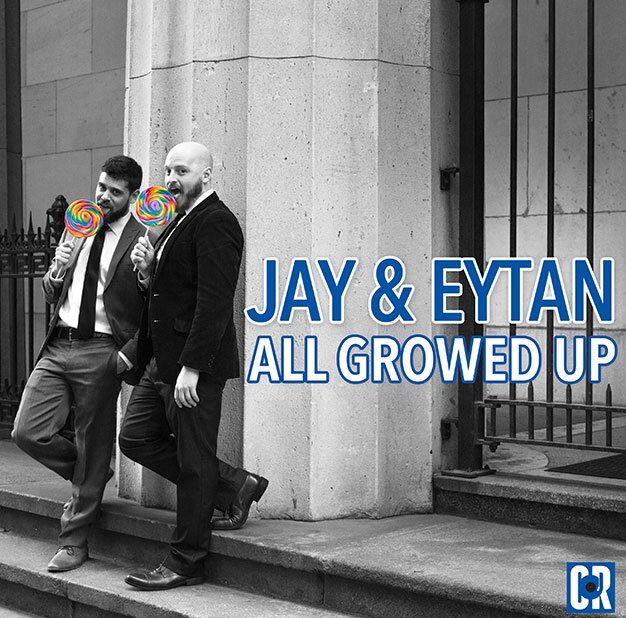 Local lads Jay & Eytan, aka Jay Wells L’Ecuyer and Eytan Millstone, achieved viral videodom a few years ago for their endearing yet obnoxious Catholic boys’ school rapper wannabe alter egos Rick and Chuck. The two have since moved to Brooklyn and, as the title of their excellent new sketch album makes clear, they’re All Growed Up. Thankfully, their comedy has kept its edge.

The duo are especially good at sending up the new digital universe. A sketch called Uber Pool is a hilarious two-and-a-half minute bit about an app that gets you a taxi ride and possibly gets you laid by pairing you up with strangers. In Instagram, an artist reconsiders opening a social media account when douchy bros tell her how to make her pics into sexy selfies to gain followers. And the album’s clever closer shows what happens when your GPS computer voice gives you attitude.

The writing and production values are sharp throughout. In You Wanna Take This Outside? two guys argue at a party and decide to fight outdoors. What follows – an elevator ride, small talk about their kids, bonding over a hot teacher – is brilliantly unexpected, with each sound effect and banal statement ringing true.

Sex is a big theme on the album, from the sketch about a guy who gets turned on during a laser hair removal session to one in which a hillbilly requests some Planet Earth sex tapes from David Attenborough. A one-minute sketch about a man who’s into being infantilized shouldn’t work but does.

These – and an absurd bit about a guy obsessed with the tag to the song Happy Birthday – more than make up for the less successful tracks about radio magicians, UFC contestants and obscure movie scenes.