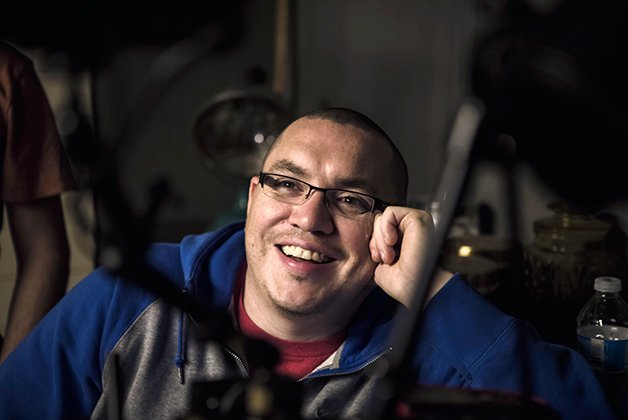 Jeff Barnaby’s been making short films for a decade and he’s enjoyed some success on the festival circuit. But the Mi’kmaq writer/director has found himself in the national spotlight with his first feature, Rhymes For Young Ghouls, which was lauded at the Toronto Film Festival and selected for TIFF’s Canada’s Top Ten.

For a first feature, the texture of Rhymes For Young Ghouls is striking. The story of teenager Aila (Kawennáhere Devery Jacobs) growing up on a reserve in northern Quebec in the late 70s, it feels like a collection of short stories brought to the screen.

“My screenplays are very dense, and I’ve gotten compliments and complaints in terms of how much they resemble novels rather than screenplays,” Barnaby says. “I had a producer refer to one of my screenplays as Finnegans Wake. They’re like, ‘It shouldn’t take two days to read a screenplay!’ But I think it all starts, for me, with the way the word is written on the page. If you can capture your readers early, they’ll envision it almost the same way you do.”

The era in which Rhymes is set was not particularly great for Canada’s First Nation peoples, and Barnaby doesn’t sugarcoat his characters’ poverty and substance abuse.

“Traditionally, your reaction to that is ‘Oh, how horrible!’ But my [interpretation] is, they do it because they like it. They do it because they have a good time doing it. So I wasn’t gonna treat it all maudlin and dystopic it was gonna be fun. But at the end of the day, I had enough faith in the audience for them to realize that [the characters] are masking a pain they don’t even know how to articulate.”

It’s a pain, he says, that still resonates.

“You can say, ‘Well, there’s no more residential schools,’ but all they’re doing is transferring that [institutional] indifference into different things, like the Education Act [being] stacked against native people, or poverty or health issues,” he says. “There’s just this wilful ignorance there, and it’s strange. I don’t know how Canada interprets native people, but it doesn’t seem like they interpret them as being human.”

Jeff Barnaby on his background and influences:

Barnaby on using residential schools as an existential threat in the film:

Barnaby on what he wanted to do with Rhymes For Young Ghouls, and what he didn’t want to do: