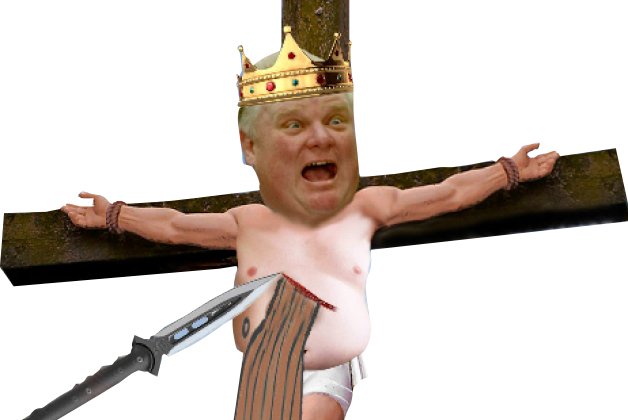 On page 2 of the April edition of Ward 32 News, a column by an incarcerated dangerous offender claims that Olivia Chow’s accent is fake.

On page 6 of the paper is an op-ed by James Sears (aka professional misogynist/seduction instructor Dimitri the Lover), a former doctor who was stripped of his medical licence for sexual misconduct with patients and whose most recent post on his personal blog is entitled How To Employ Rasputin MindRape Protocols To Manipulate Fags Into Aggressively Recruiting Sluts For You.

On the back page is a bizarre cartoon of Mayor Rob Ford strung up on a cross alongside the aforementioned Sears, who is running for council in Ward 32. “Those that can correctly answer who is on the cross next to Rob Ford” are eligible for a prize pack.

And midway through this erratic publication [pdf] is a half-page advertisement for the Ford Nation YouTube series.

“Toronto Mayor Rob Ford and city councillor Doug Ford discuss everything from politics to sports,” it reads, before encouraging readers to subscribe to the YouTube channel. “Get to know the mayor that the whole world is talking about. Send any questions you may have for the mayor and/or his brother Doug to fordnation2014@gmail.com.”

The ad appears professional – or at least consistent with that particular strand of semi-professional that has become a trademark of the Fords. The same ad showed up on the back page of the February issue and in a smaller eighth-page size in March.

The Beach’s Ward 32 News is the flagship periodical of an aspiring chain, Your Ward News, which also puts out a Ward 31 edition covering a chunk of East York. Its website says it’s delivered to homes and businesses in both areas, reaching “up to 50,000 readers per month.” Editor/publisher LeRoy St. Germaine wielded the paper as a key weapon in his campaign against then Ward 32 councillor Sandra Bussin, whom he perceived as corrupt because of her role in obtaining a very favourable lease renewal for the Beaches Boardwalk Café. She famously secured city funding to launch a libel suit against the publication.

Rob Ford took issue with the same deal and found himself subject to a separate defamation suit from the Café’s owner for remarks he made to the Sun editorial board in 2010. (That case goes to the Court of Appeal next month.)

It therefore wouldn’t be especially surprising if the brothers Ford were taking out paid ads in St. Germaine’s papers (which according to their rate sheet would range in price from $349 to several thousand dollars for a three-month run).

But it turns out the Fords aren’t.

“Mr. Ford does not advertise with our paper. We’re delighted to give him free advertising,” says St. Germaine in an interview that gradually proceeds from disarmingly pleasant to expectedly ferocious in a two-minute span. “Because the man is the only mayor in my 70-some-odd years in this city that is actually doing the job properly. Instead of a bunch of socialist morons spending us into the ground, making life hell and unbearable for the working poor, fuelling inflation to no end without even a thought of their reckless moves.”

James Sears, however, is an advertiser, as St. Germaine is proud to tell me. He says the crucifix cartoon and contest is actually a full-page ad purchased by Sears and dismisses questions about his Dimitri the Lover persona and history. “You know what? That has nothing to do with how [he’d do] his job as a city councillor,” he says. “Just like Mr. Ford’s business ain’t nobody’s business but his own.”

I am unable to keep St. Germaine on the phone long enough to ask how he reconciles this position with his paper’s 2010 argument that George Smitherman was unfit for office because of an admitted addiction to “party drugs” in his pre-MPP days. “As an alcoholic is always an alcoholic, so a cocaine addict is always a cocaine addict, forever plagued by a morbid craving for the substance,” Your Ward News wrote at the time.

Asked whether Mayor Ford is aware that Ford Nation ads were running in these papers and how he feels about it, the mayor’s chief of staff, Dan Jacobs, referred questions to Doug Ford, “as the YouTube channel is a campaign-related item.”

Campaign manager Doug Ford, for his part, says in an interview that he hasn’t heard of these papers and initially suggests that the placement of the ads in the context I describe is a plot to discredit him and his brother.

“If they’re running ads under the Ford Nation banner or Rob Ford, it’s a bogus scenario,” he says. “It’s obviously the enemies doin’ it. You should be able to read through that. You’re a smart enough guy, Jonathan.”

I explain that the paper’s publishers appear to be sincere in their support, and later, after getting a chance to review a PDF of the paper himself, Ford emails me: “I will look into this as you are aware people are doing and saying some real disgusting things that we totally disagree with. Thanks for bringing this to my attention.”

Sears, meanwhile, takes credit for the crucifixion concept and says in a message that he’s “there to comfort our dear leader as he is sacrificed for a greater cause” – the fight against Marxism.

But the Fords, typically enthusiastic when it comes to embracing controversy, don’t seem terribly receptive to his offer of comfort. This could be where they draw the line.