NOW MagazineNewsThe Jian Ghomeshi trial: Who has accusers back in this set-up?

The Jian Ghomeshi trial: Who has accusers back in this set-up?

The medias sexual objectification of Jian Ghomeshis lawyer, Marie Henein the detailed descriptions of her shoes, clothes and physical. 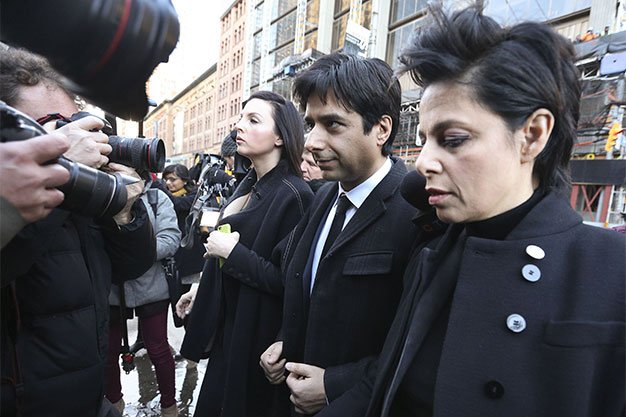 The medias sexual objectification of Jian Ghomeshis lawyer, Marie Henein the detailed descriptions of her shoes, clothes and physical appearance has dropped off, at least for now.

At the sexual assault trial of the century, which started Monday, February 1, not even the high-profile lawyer of the accused, the former host of CBC Radios Q, can escape media assumptions about rape culture.

What I can tell you watching from my perch in the media gallery of the Old City Hall courtroom is that Ghomeshi is slim, still dresses in expensive suits and blinks a lot. The judge has a nice face with rimless glasses. He wears a black robe with a red sash and a gold watch. The Crown prosecutor still has his little-boy face about him and a well-shaped head that he keeps shaven.

None of their shoes have impressed me.

In her cross-examination of the first of three women giving evidence against Ghomeshi, Heneins command of the courtroom was absolute.

She did not attack Ghomeshis accuser, whose name is under a publication ban. She was professional, her voice even, her patience evident.

She did, however, render the witness angry and confused, and suggested she was under the influence of false memory and was lying about what happened between her and Ghomeshi 12 years ago. All of it is building toward a defense of reasonable doubt. And a good part of that is resting on what colour car Ghomeshi was driving on the night in question and whether she was wearing hair extensions or not.

It appears that neither the Crown lawyer nor the lawyer the witness hired had prepared her at all for her testimony and for the kind of cross-examination she would face in a sexual assault trial, or any trial at all.

She was combative with Henein, defensive, sarcastic. By the second day on the witness stand, her contempt was palpable.

She answered questions with long, detailed explanations and challenges, providing the defence with more fodder and colluding in her own undoing.

Those watching in the courtroom, mostly media, gasped and shook their heads in disbelief that she seemed so unguarded against defence tactics.

And its too bad because she is strong and smart and could probably take Henein in a fair fight. But its not fair she is alone.

The Crown did not object the judge did not suggest a break. No one has her back in this trial, her trial, against the high-powered legal team thats advising Ghomeshi.

Of course, he should have full rights to the best representation, et cetera.

But the complainants lawyer has no standing. And the Crowns obligation is to defend the state, not the victim, at trial.

When Henein ended her cross-examination, the Crown did not rise to redirect the witnesss testimony or to substantiate it in an effort to rebuild her credibility. The judge seemed fine with it all.

There was some discussion about whether a picture of the witness in a bikini that she sent Ghomeshi after the assault should be a public exhibit (it wont be), and the court broke.

Ghomeshis accuser left the courthouse with her head high, walking into the scrum of cameras and reporters waiting outside, where she read a statement saying she would do it all again.

Its a no-brainer that witnesses should be prepared for trial and understand the culture and practice of the legal players who question and judge them, especially in a sexual assault trial.

But women who report are not usually informed by investigating police officers that their videotaped statements (curiously known as KGB statements) are handed over to defence lawyers, who mine and sift them for cross-examination gold.

They are not always told that their emails, text messages, Facebook photos, Twitter posts, blogs, public comments and actions post-assault can be used against them.

So why shouldnt women like Ghomeshis accusers who report their sexual assaults be pissed off, outraged and defiant during a legal process stacked to shame and humiliate them?

If the crimes committed against them are so easily challenged, why do we send them defenceless into the jeopardy of a trial? Who benefits from that set-up?