Late night host makes his debut on Ford Nation, but it's not as funny as David Soknacki's biblical defence of electro dance parties 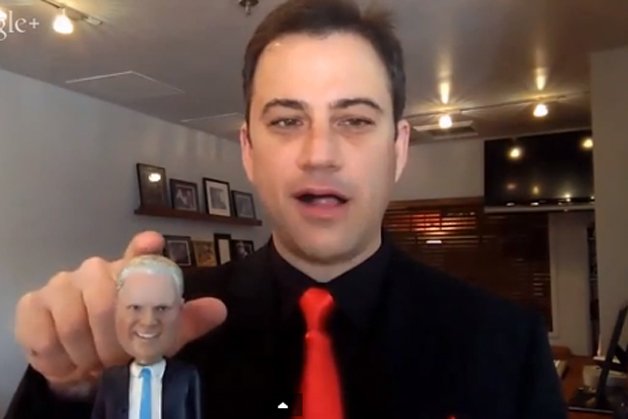 When Mayor Rob Ford made his famous appearance on Kimmel’s show last month, the late night talk show host confronted Ford with his bad behaviour and suggested that he get help for his issues with alcohol.

This time the comedian struck a different tone however, hamming it up with Rob and Doug Ford while sporting the same black shirt/red tie combination that the mayor wore on his show.

It’s somewhat surprising that the Fords even wanted Kimmel on the episode, given reports that the mayor was upset with the comedian after he embarrassed him on late night TV. What’s more surprising is that Kimmel agreed to be in something this unfunny.

Perhaps due to the fact that Kimmel was beaming into the show via Google Hangout, the comic timing of the trio is a little off and the jokes mostly fall flat. At one point, Kimmel jokes about wanting to “sleep with” Rob and his wife if he visits Toronto, which elicits a good laugh from the Fords. Not for the first time we’re left to wonder what Renata Ford did to deserve all this.

The most cringe-worthy moment comes when Doug asks about the time that Kimmel got his audience drunk before his show’s debut taping. “I’m just saying I was so drunk I don’t know what happened that night,” Kimmel says.

“I used that excuse one too many times myself!” exclaims the mayor, chuckling to laughs all around.

This is the second time that mayor Ford has made light of his alcohol use on his YouTube show. In the previous episode, when Doug read a message from a reader suggesting he relax and crack open a beer in his office, the mayor joked “It wouldn’t be just one beer, that’s the problem.”

In November, the mayor vowed publicly that he would stop drinking altogether, but since then he has reportedly appeared intoxicated in public at least four times. That he has gone from abject contrition to publicly joking about his drinking is a strong sign that he truly believes what he often says: that most voters don’t care about his erratic alcohol-fueled behaviour. It’s possible the mayor now views his drunken antics as more of an endearing personality quirk than evidence of a potentially debilitating addiction.

The mayor wasn’t the only candidate who kicked off the week with a new YouTube video. Dark horse contender and admitted nerd David Soknacki put out his own in response to Exhibition Place’s decision on Friday to ban electronic dance music events.

Unintentionally or not (it’s a little hard to tell) it’s a lot funnier than the Ford Nation vid. We cut from a Footloose reference to Soknacki, in front of a blank white background wearing a suit and tie, giving a spirited defence of humanity’s innate desire to shake its booty once and a while.

“From the oldest of times, people have danced for a number of reasons. They danced in prayer, so that their crops could be plentiful, or so that their hunt would be good,” says Soknacki, looking the straightest of comedic straightmen.

He then quotes scripture.

We don’t know if his biblical defence of electro dance parties is going to win him any votes, but please keep dancing, David. Just keep dancing.