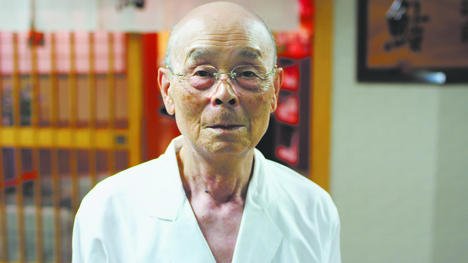 Iron Chef? Meh. Im the best in the world

Your next morsel of sushi will taste quite different after seeing Jiro Dreams Of Sushi, David Gelb’s attractive if slightly undercooked documentary about sushi master Jiro Ono.

Ono rose from humble Japanese roots to become the only sushi chef to receive a three-star restaurant rating in the Michelin Guide. In his mid-80s, he still presides over his modest 10-seat Tokyo restaurant that boasts a months-long waiting list. Since suffering a heart attack at 70, the wizened chef has slowed down, but he’s not yet ready to hand over the shop to his son Yoshikazu, who’s been patiently working there for decades.

Gelb takes us through each step of the sushi-making process, from getting the best ingredients (a visit to Tokyo’s famed Tsukiji Fish Market is a highlight) to the patient grilling of nori. Perfection isn’t easy. An apprentice tells us he worked for a decade before being allowed to cook an egg.

Ono isn’t very talkative – his mischievous eyes tell us more than his words – so it helps to have food critic Masuhiro Yamamoto put the man’s achievements in perspective.

But Gelb never builds momentum, instead repeating (hypnotically gorgeous) images to bits of familiar movie soundtracks and classical music. And, yes, Japan is a private society, but the omission of any mention of Ono’s wife sticks out like a rogue grain of rice on an otherwise impeccable plate.