Whether former foreign affairs minister's appointment to the board of mining giant is payment for past political favours or not, it helps demonstrate corporate interests politicians serve while in office 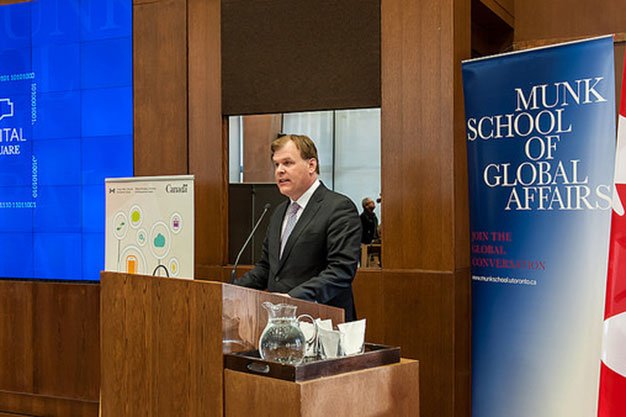 John Baird shocked the country this February when he abruptly announced that he was leaving his post as Minister of Foreign Affairs and member of parliament. Last week, a regulatory filing of Barrick Gold revealed that the mining giant had hired Baird to its international advisory board, headed by former prime minister Brian Mulroney, for an undisclosed amount of money.

In hindsight, it is easy to see how Baird’s position as Minister of Foreign Affairs could have benefitted both Barrick and Barrick founder Peter Munk’s pet project, the Munk School of Global Affairs at the University of Toronto.

Baird has admitted to consulting Ethics Commissioner Mary Dawson just one day before news of his departure from political office was known, suggesting he was manoeuvring to respect at least the letter of the law. The Conflict of Interest Act prohibits former cabinet ministers from taking a job with any firm with which they had “direct and significant” dealings within one-year of leaving office. This prohibition remains in place for two years after the minister’s last day of work.

Luckily for Baird, his last meeting with Munk in Davos, Switzerland was almost one year to the day before his meeting with the ethics commissioner – a coincidence that calls into question how long Baird has been planning this move. Baird also met with former Barrick lobbyist in May 2013 to discuss “mining, international relations.” On Monday, regulatory filings revealed Baird has been nominated for a position on the board of Canadian Pacific, another company with which he has had dealings in his former position as Minister of Transportation.

Regardless of technical legality, Baird’s former department oversaw the transfer of millions of dollars of public monies to Barrick Gold and Munk’s projects.

Under Baird’s leadership, the Department of Foreign Affairs absorbed the Canadian International Development Agency (CIDA), a move to align CIDA’s development work with Canada’s commercial interests and foreign policy objectives. CIDA had earlier granted $500,000 towards a project partnering with Barrick and World Vision next to a Barrick mine in Peru. These kinds of partnerships were to be more common under CIDA’s new management structure.

This January, Baird announced $9 million in federal funds for the Digital Public Square Project, a project headed by the Munk School of Global Affairs, to “increase digital space for free expression and open political dialogue in places where civil society and citizen participation are under threat.” Previously, Baird’s department had given $250,000 to the Munk School’s Global Dialogue on the Future of Iran, a predecessor to the Digital Public Square Project, with that money going towards a conference of the same name. Interestingly, this project was criticized by many within the Iranian diaspora for deliberately leaving out Iranians “whose views on Iran do not fully concur with the positions of the Harper government,” according to an open letter penned by Iranian Canadian Community Council and co-signed by seven other Iranian community groups.

Baird was a frequent supporter of the Munk School, and has made public appearances at events several times over the past few years. By comparison, it doesn’t seem that Baird has made an appearance at the University of Ottawa since 2010.

Baird’s foreign policies have been criticized for their selectiveness and partisanship. “While naming and shaming Iran, Baird downplayed similarly dismal [human rights] records in the Gulf States—Saudi Arabia, and Bahrain in particular,” says David Petrasek, associate professor at University of Ottawa’s Graduate School of Public and International Affairs. While Baird’s view may have been motivated by the Conservatives’ political biases, they also favoured Barrick’s objectives in the region, having recently announced a partnership with Saudi Arabia.

Whether Baird’s appointment is payment for past political favours or motivated by a wealth of contacts with foreign diplomats and heads of state, his new role in the private sector should sound alarm bells.

The revolving door demonstrates whose interests politicians serve while they are in office, and their lack of concern for good timing proves that they are arrogant enough to think that there’s no problem with that. Barrick’s investors should also be concerned with how much of this politicking actually helps their investments, or just creates an extra layer of fat for Munk’s political buddies.