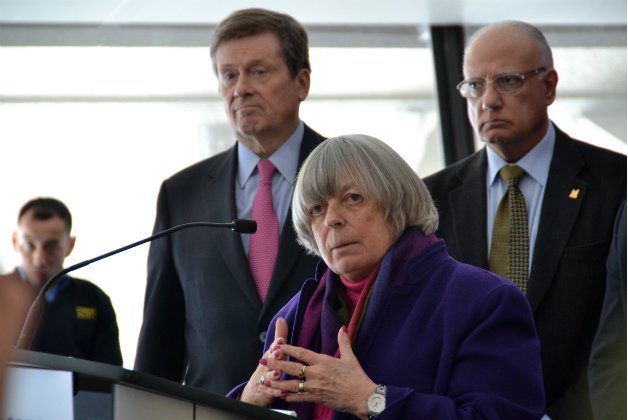 Of the $2.2 million, $356,000 will go to add up to 27 new schools to the city student nutrition program, $200,000 will fund an employment program for single parents, and another $200,000 will go to youth arts employment and training. There is also money for two new youth workers, an inflationary increase to the Hardship Fund, and a pilot project to provide transportation to isolated seniors.

The $2.2 million was already set aside in the 2015 operating budget, which is currently working its way through council, but it wasn’t known until Thursday how the money would be spent. A detailed report on the funding will go to the budget committee on Friday.

Deputy Mayor Pam McConnell (Ward 28 – Toronto Centre-Rosedale), who Tory has chosen to lead the anti-poverty efforts, said the city can’t wait any longer to tackle inequality. She said that in Toronto one quarter of children and one fifth of adults are living in poverty.

“I believe that now is really the time for us to act,” she said, adding that the 11 initiatives she selected to receive funding include “the areas of the city that have been left out in the past.” The money will be spent mostly in Neighbourhood Improvement Areas and communities outside the downtown core.

McConnell stressed that the $2.2 million was only a prelude to the full poverty-reduction strategy, which she intends to present to Tory’s executive committee in June.

Michael Polanyi of the Alliance for a Poverty-Free Toronto describes Thursday’s announcement as “a first step,” and says he’ll be “watching carefully” for details of the full strategy.

Polanyi, who sits on the city’s poverty advisory committee, says he’s already certain about one thing, however – Mayor Tory is doing more than his predecessor Rob Ford to bring down poverty rates in Toronto, which are the worst in Canada. In total there is $24.5 million in the 2015 budget earmarked for anti-poverty efforts, including investments in homeless shelters, child care subsidies, and priority centres, as well as a plan to let children ride the TTC for free.

“It’s night and day,” Polanyi says. “The visibility and the leadership from the top is huge in addressing this issue. So we’re very pleased about that.”